Electing Mitt Romney as the next President of the United States of America would be like appointing a serial paedophile as a kindergarten teacher, a rapist as a janitor at a girls' dormitory or a psychopath with a fixation on knives as a kitchen hand. His comments on Russia are a puerile attempt at making the grand stage and boy, did he blow it... 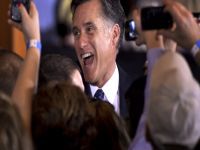 Somewhat like Condoleezza Rice did before the Bush regime was er..."elected" ..., Mitt Romney takes the chance to mouth off about Russia, calling her "our number one geopolitical foe" which fights "every cause for the world's worst actors". Unfortunately, such vapid stupidity has become commonplace among senior US politicians, providing the rest of the world with a telling insight as to the real nature of the political class in that country - out of touch, out of date and dangerously jingoistic. In short, overgrown self-opinionated schoolboys with super-egos but nothing whatsoever to back it up with.

True, it feels great to slag off another country's cuisine and say, for example, that "Mexican food is crap! American food is far better!" Adolescent-type comments such as these generally provoke a session of back-patting, and a ra-ra-ra raucous explosion of national pride which after a few drinks degenerates into "My God is better than your God" and then "My President could smack the crap out of yours".

Fine for grade school playgrounds. And that, ladies and gentlemen, is where this upstart nonentity Mitt Romney belongs, certainly not to the intricate and complex wheels and cogs of world policy and nowhere near a red button. Imagine this guy as President!

Exactly at a time when Russia and the USA are finding that they have far more in common than differences, exactly when they see that they are much more friends than foes, when they see that there is so much to be gained through collaboration, a foul-mouthed, big-headed oaf like Romney with more money than sense makes a comment that reveals who he really is to the world: a pea-brained, pith-headed simpleton with too much testosterone and too little common sense, with zero tact, no diplomacy and a paramount grasp on the intricacies of world politics. A prize, good-for-nothing ignoramus

At a time when Russia and the United States of America are working together in space, at a time when the scientific communities and Universities are ever more intricately linked, when the security networks share information more freely on terrorists, on crime, combating drugs trafficking, at a time when the two countries are working together on trade and commerce and forging common links on intellectual property rights, up comes stick-in-the-mud wannabe Presidential candidate Mitt Romney blurting out outdated Cold War drivel like some redneck nearing an alcoholic coma.

With as much credibility. In fact, one has seen more intelligent things scrawled in excrement on the walls of public latrines.

So perhaps Mitt Romney agrees with US policy? Maybe he agrees with Guantanamo Bay concentration camp, maybe he applauded what went on in Abu Ghraib - the urinating in food, the torture, the setting dogs on people, the rape, the sodomy of male detainees. Aren't Mormons supposed to be against these things? Wow... Mitt Romney probably backed the USA's policy of arming and supporting terrorists in Libya to destroy the Jamahiriya just because Gaddafi's African projects were costing its institutions and lobbies too much money and for sure Mitt Romney is also backing the terrorists, (sorry "activists" because they buy NATO weaponry) in Syria.

So talking about geopolitical foes...next time Mitt Romney had better back off, butt out and mind his manners, so as not to appear like a foul-mouthed guttersnipe whose utter ignorance and pig-headed arrogance is only too clear for all to see. See how he walked straight into this one, ladies and gentlemen? Imagine THAT as your President...