Flagrant examples of police brutality, attempts to stop information from circulating. In two words, attempts at censorship and repression. This is not an intelligent means at conducting social dialogue at a time when the Portuguese people are indignant after their governing class (PSD, CDS/PP and PS) has destroyed the future of the country. 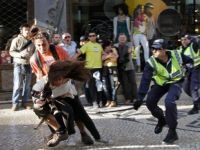 Let us examine why the Portuguese are frustrated. Portugal had a revolution in 1974, whose aims were the end of the colonial war in Africa, workers' rights, the right to full political and social participation by the citizens and the modernization of the country. Two political parties have been in Government since then, namely the PSD (Social Democrats) and the PS (Socialists). Neither does the first have any social preoccupation at all nor is the second Socialist in anything but name. Both of these parties follow right-wing policies and have governed Portugal since 1974, either alone or as a coalition, sometimes with the CDS/PP (Christian Democrats, Conservatives).

The results of these almost 40 years of political mismanagement by the PSD, PS and CDS (no others) are the following: Portuguese fisheries have been destroyed and Spanish vessels come to fish in Portuguese waters; Portuguese agriculture has been decimated, as one can see when one drives across the frontier to Spain, barren on one side and green on the other and Portuguese industry has been virtually wiped off the map. Now they have suddenly realised that there are no jobs for the young, who are flocking abroad in droves - 150,000 emigrated last year alone. In a population of ten million?

There are over 1.2 million unemployed and if the Portuguese authorities drew up the figures properly, the sum would read even more. Not everyone who cannot get a job counts as "unemployed" and for those that do work, a huge percentage are precarious workers without full rights, who can be fired at any minute, cannot use their salary as a guarantee to buy a house, get a car... or start a life.

The education system has become a business. Today if you want to do a degree you have to pay a hundred Euro a month for it; a Master's degree (virtually compulsory since the Master's is now part of an integrated degree under the Bologna process) costs thousands, an MBA costs tens of thousands and a Doctorate is a commercial negotiation between University and student.

The healthcare system is becoming a business as well - people have to pay to be seen, pay to be operated on and then the waiting lists are so unacceptably long that in many cases the best thing is to give up, go to the private sector, and of course pay thousands of Euros to be treated. And live. 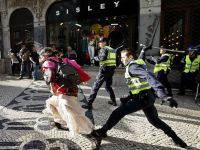 And live? How, if the average salary in Portugal is way below 1,000 EURO (894 Euro in fact)? Before taxes, that is. Added to that there are around 350,000 workers receiving the minimum salary (500 Euro); 22 per cent of the workforce is on short-term contracts. Now let us see an "average" expense sheet for a family budget in Portugal (absolute minimum prices). Rent: 500 Euro (in fact it would be a challenge to find anything for this price these days in Lisbon); Gas 30 Euro; Electricity 30 Euro; TV, Internet and telephone package 70 Euro; cell phone 20 Euro; transportation 27 Euro for a Metro pass, far more for combined Metro, train and bus passes; water 20 Euro; food - among the most expensive prices in Europe to go shopping in supermarkets - a minimum of 300 Euros per month for household expenses per couple.

So let us see our total: 997 Euro expenses, 894 income per person before tax. If both members of the couple received an average salary (and both usually do not), then in round figures the gross income is 1,790 Euro, minus income tax would be around 1350 Euro with absolute minimum expenses around 1,000 Euro. We have yet to take into consideration a car, fuel, clothing and whether or not the couple have dependent children or relatives, repairs to the house and so on and we see that the day to day life of the average Portuguese is a living nightmare.

Coupled with this, as mentioned above, with the means of production destroyed, jobs are worse than scarce, the future for Portugal's youth is worse than bleak; the dependence of a child on a family is no longer the late teens, it is more likely the early thirties. And what sort of stress does that place on an already beleaguered family?

So it is hardly surprising that the citizens use the only means they have of attracting the attention of the Government, namely calling a general strike. Two observations here. Firstly, the reaction of the authorities and secondly, that of the Portuguese population.

The reaction of the authorities was predictably stupid but then again, what to expect of those who practise policies of endemic stupidity? The attempt to silence the organs of communication in the companies which would register the real effects of the strike was a puerile attempt at censorship when everyone can see how exasperated the Portuguese people are; and with each and every hike in the price of fuel and electricity, and the ensuing price rises across the spectrum, it is going to get worse.

Let the truth be said. However the riot police are something else and at times it appears they are fed on raw sharks' livers before the cage is opened and they go berserk. In the 1980s, when Aníbal Silva was Prime Minister I witnessed some horrific scenes of these...people?... charging against innocent citizens on the 25 April Bridge, then in Marinha Grande, beating women around the head with batons and in front of me, in Lisbon, I saw an old lady bludgeoned to the ground, kicked, and called "puta de merda" (shitting whore). I was there, she was standing on the sidewalk, doing nothing. I picked her up. These scenes were eventually enough to make Aníbal Silva cross the political desert for ten years, before he carefully cultivated his return.

Now, with the same Aníbal Silva President and his former protégé, Pedro Coelho (President of the Young Social Democrats when Silva was Prime Minister) as Prime Minister, we start to see the same scenes again. Women hacked with batons, pickets physically removed from factory gates... not one case but many, documented on the Net. The international community is watching, the Portuguese police force is not synonymous with brutality. Word of warning:  Be careful.

As regards the Portuguese population, several comments sum up how such General Strikes are received. One, "The way forward is to work, not to stop. We have to work together, like patriots". This type of demagogic nonsense sounds great, does it not? It sounds as great as braying out loud in a public square "Spanish food is shit! Portuguese food is the best in the world (BELCH)".

However, that is exactly what they want - people to work, longer hours, for less pay, no rights and no guarantees. Trusting the people who put Portugal in the situation it is in by working harder for them is kind of like lowering your trousers, turning round and...

Another, "These bastards, the only thing they know is not to work, and make things difficult for me, if I don't work I don't get paid". 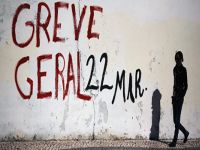 Well, well, here we have the crux of the matter. The strikers are not "bastards", they are "patriots" because it is the only way they have to make the Government feel the need to reconsider. True when you get the PSD in Government, negotiation is not its middle name. And rather than adopt an "us and them" attitude, the question is, those who are trying to get this Government to reconsider are doing nothing more or less than trying to save the country from disaster.

Think in terms of a Portugal without any future at all. Ask yourselves what these governments have done. And do something about it before it is too late. This is Portugal's last chance.

The ship is sinking, everyone is jumping overboard. The captain and the officers are OK, they have a lifeboat waiting for them, piloted by Admiral Silva. Will those left on the ship allow their children to sink? I don't think so.