Syria and the revival of the Genocidal Ottoman Empire

One vector in the Syrian crisis which seems to be ignored by the international media is the question of the rise of Turkey as a regional power-broker. Let us therefore remember who and what Turkey is, what it is responsible for and examine its past history in the area. It is certainly not very pleasant. Key word? Genocide. 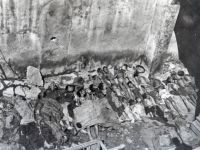 "The Turkish denial [of the Armenian Genocide] is probably the foremost example of historical perversion. With a mix of academic sophistication and diplomatic thuggery -- of which we at Macquarie University have been targets -- the Turks have put both memory and history into reverse gear."
- Prof. Colin Tatz, Director, Centre for Comparative Genocide Studies

"It was not war. It was most certainly massacre and genocide, something the world must remember... We will always reject any attempt to erase its record, even for some political advantage."

Yossi Beilin - Israeli Deputy Foreign Minister. April 27, 1994 on the floor of the Knesset in response to a TV interview of the Turkish Ambassador

In fact, the genocide started well before this time. It has been estimated that under Sultan Abdul Hamid, between 1894 and 1896, over 100,000 Armenians had been slaughtered in their villages after levying special taxes on them for being Christians.

"The Ottoman Empire should be cleaned up of the Armenians and the Lebanese. We have destroyed the former by the sword, we shall destroy the latter through starvation." Enver Pasha - One of the triumvirate rulers publicly declared on 19 May 1916...

In 1939, Hitler told his generals: "Thus for the time being I have sent to the East only my 'Death's Head Units' with the orders to kill without pity or mercy all men, women, and children of Polish race or language. Only in such a way will we win the vital space that we need. Who still talks nowadays about the Armenians?"

The Turks, in fact, invaded and annexed a vast part of the territory of Armenia, the world's first Christian nation. Claims that Mount Ararat is "Turkish" are proof of this, because Ararat was and remains Armenian.

"Turkey is taking advantage of the war in order to thoroughly liquidate (grundlich aufzaumen) its internal foes, i.e., the indigenous Christians, without being thereby disturbed by foreign intervention. What on earth do you want? The question is settled. There are no more Armenians."

Talat Pasha - In a conversation with Dr. Mordtmann of the German Embassy in June 1915...

And it was not only Armenians that were slaughtered by this brutal country and its brutal inhabitants: Greeks, Assyrians, Nestorians were murdered in their millions. To be more precise, "1,428,000 to 4,380,000 murdered, likely 2,781,000 Armenians, Greeks, Nestorians, Moslem Turks, Azerbaijanis, and others" (2).

Turkey's genocidal massacres must not be forgotten, as this country prepares to do the west's dirty work in Syria, creating a buffer along the border.

"In 1915 the Turkish Government began and ruthlessly carried out the infamous general massacre and deportation of Armenians in Asia Minor." "There is no reasonable doubt that this crime was planned and executed for political reasons."

If this buffer is inside Turkey, Ankara can do what it likes inside its own territory; if, however, it reaches the Syrian side, then it is an invasion and who is to say Turkey's brutality and genocidal acts of mass murder would not be repeated?

Turkey claims that it did not commit genocide. There is, however, a wealth of documents which counter this. "The sheer weight of all this material in English alone...is such that the invalidity or falsification of some of it can hardly effect the overall conclusion that a genocide took place" (2).

"Those who assist turkey...I say that they should be marked forever as a shame, a horror and a disgrace to mankind."
Signor Garrini, Italian Consul-General, August 25, 1915

As the tables claim, millions of Armenians were slaughtered. Now if that is not genocide, I don't know what is. Add to this hundreds of thousands of Greeks... does Turkey not have some apologising to do? And until it does, what is the West doing using a country with this type of history to do its dirty work in a sensitive area?

And further to that, has anyone calculated the consequences of a Greater Turkey in this region?

"The Turk is so absolutely without a moral sense, so unutterably bestial
in his consideration of woman, so unthinkably vile and filthy in his personal habits, and so hopelessly degraded in his relations with his fellow man that the depth of his
infamy is past all human credence.

The Turk is not a human being. I do not call him a beast, because not
one of God's dumb creatures could sink so low. The Turk is a devil without a tail. And the educated, polished Turk-the official who affects a knowledge of the French
language and a veneering of Parisian manners--is the most unspeakable fiend of
all. In proof that this assertion is based on incontestable truth I challenge denial from any unprejudiced man who has known the Turk thoroughly well for a quarter of a century."