"Not only has Barack Obama failed to change anything, not only has he continued the policies of the Bush and previous administrations, he has gone over and beyond their treachery. The country has already slid down the slippery slope of unbridled capitalism, anti-unionism and anti-humanism. The Nobel Prize seems like somebody's idea of a bad joke". 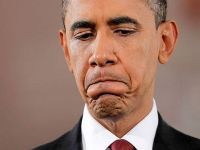 1. What is the appraisal in the USA of President Obama? Do you consider he is a one-term President?

When Barack Obama was elected President of the United States, the world community was thrilled and happy. Weary from decades of U.S. imperialism, arrogance and war mongering, many thought that now at last the country would turn from its errant ways.

Not so. Not only has Barack Obama failed to change anything, not only has he continued the policies of the Bush and previous administrations, he has gone over and beyond their treachery. He started his very own war with Libya, now he moves on to Syria and like a trained parrot regarding Iran, keeps saying, "All options are on the table."

2. The world community certainly feels this way. And as regards elections?

3. After the Bush regime, you mean?

The country has already slid down the slippery slope of unbridled capitalism, anti-unionism and anti-humanism. By the way, when I speak of humanism, I am not going by the current liberal definition. What I mean is caring for your fellow man, preserving human dignity, making sure that no-one starves, no-one is homeless or without a means to maintain health and well being.

The progress made by decades of union struggle have virtually all been lost.

Nothing has been done to prevent the movement of jobs overseas, and that would be even worse with a Republican. They are all for big business all the time and in each and every circumstance, the rich are getting richer and the poor, getting poorer.

Unemployment and homelessness would only get worse. Republicans don't care as long as their benefactors can see tidy profits from war profiteering, weapons sales and reconstruction projects where the U.S. has destroyed the infrastructure of every country it brings "freedom and democracy" to. Obama has brought the Democrats to that same platform.

4. Barack Obama was awarded the Nobel Peace Prize. Why do you think that was and did he honour it?

It seems like somebody's idea of a bad joke. Perhaps it was an attempt to permanently discredit the entire process involved. In any case, Obama made a complete scandal of it, totally dishonored it in every way. They may as well have awarded one to Adolph Hitler retroactively and posthumously.

5. What has been done in practical terms in the USA during the Obama Presidency?

The only real accomplishment has been the passage of the health care legislation. It was highly flawed, however, and most likely will never see the light of day. I really do not see much else in the way of accomplishments.

Other than that, same old, same old. How do you become more Republican than a Republican? Well Obama has. There's no difference between the two political parties basically, except that the Republican party would spell utter disaster for the working American and the unemployed, all of those in need of social services. The USA probably would see the total destruction of all networks created to safeguard those in need. Retirees would probably have to kiss social security good-bye.

6. How important are those who claim Barack Obama was illegible to be President? The "birthers"?

Birthers are really stupid if you ask me, and their motivation highly questionable. Who cares where Obama was born or when or to whom? If they were successful in achieving their goal of getting rid of the guy for this idiotic, spurious reason, what will they have to show for it? Joe Biden as President?

Sounds wonderful. Or even better, maybe the Republican warmonger scumbag would win the election.

The system stinks and really has to go. If this is democracy, no sane person should want to have anything to do with it. How privileged should one feel to vote when it's just a matter of choosing which candidate put forth by the elite stinks less knowing that whoever you end up with, nothing is going to change, that is, nothing good will happen?

Conclusion: Of all the candidates who have a chance, Obama smells the least.

Only two parties with any chance whatsoever of success? Is this really democracy? I don't think so. The U.S. is in no position whatsoever to speak to anyone, anywhere, any time about "democracy."

One has to start defining what is being talked about here. The unspoken Orwellian U.S. definition of democracy is as follows: doing whatever Washington and/or Tel Aviv tells you to do.