Did Israel strafe civilians with aircraft?

Much is said of the so-called "atrocities" by the authorities in countries like Libya, Syria, Iran and so on. Much is said of Iran's nuclear program. Many accusations are made about "clampdowns" against "civilians" by brutal regimes but...do Libya, Syria and Iran strafe schools with phosphorous? 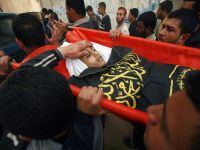 Why, SKY News stood by two days ago filming a group of vandals destroying a Syrian Air Force jet with "small arms" and called it a "victory". Suppose one invited SKY News to go to a British Air Force base, whereupon one were to trash an entire fleet of aircraft, would they call that a "resounding victory"?

No, they would call it a terrorist attack. So Iran cannot have a peaceful nuclear programme but Israel can sit on nuclear warheads buried away in the desert and nobody says boo?

So where do we stand on the recent clashes between Palestinians and the Israeli Defence Force in Gaza? The clashes began on March 9 when Israel carried out a terrorist attack, murdering Zohair al-Qaisi, the Secretary-General of the Popular Resistance Committees (PRCs), justified by Tel Aviv because he was planning to carry out a terrorist attack himself. Where is the evidence?

Shall we examine the evidence Israel used? It claims the Popular Resistance Committees were responsible for a previous terrorist attack against Eilat last Summer. However, it was then proven that the perpetrators of this terrorist attack entered Israel through Egypt and not across the Gaza border.

The Palestinians retaliated to this attack by firing 300 rockets at Israel, in which 23 Israelis were injured. The Israelis retaliated in turn killing between 23 and 35 Palestinians and injuring a further 74. Most of the wounded are reported to be civilians and among them are many children.

Israel has apparently admitted it used its air force in the strikes. Where in international law is it allowed to use indiscriminate violence of this sort against areas inhabited by civilians and does the use of military aircraft against children not constitute a war crime?

The international mainstream (bought) media is once again quiet on this one, because of course when Israel does something everyone turns away or when an Israeli official says something, it is hushed up, denied and removed from the internet. Censorship however no longer exists and there exists something called freedom on the Press and freedom of expression, so if Israel is using military aircraft to strafe civilians, then the world has every right to know about it.

Observation: To level criticism against Israel is not being anti-Jewish. One uses the term anti-Jewish because the term "anti-Semitic" is nonsensical, since "Semitic peoples" are those speaking Semitic languages, which include Arabic and one does not use the term "racist" because the Jews are not a race.

There are many, including many Jews, who believe in peaceful coexistence and the UNO has sponsored many programmes which organise joint sports programmes, joint debates or joint cultural activities, favouring a developmental and non-political approach in which Palestinian and Jewish boys and girls form bonds and friendships.

Why does nobody in the world community raise these issues and why does everyone turn a blind eye when Israel breaks the law? Is there some aspect of world politics that has escaped me?

Main photo: Funeral of  Assaleya Ayoub, 12. Murdered in an Israeli terrorist strike with aircraft in Jabalia, Gaza while walking to school.