Syria, Russia and the truth

It is by now crystal clear that western media resources are trying to shape public opinion against Russia by using Syria, or against Syria by using Russia, the eternal foe from the Cold War (after losing 26 million souls freeing Europe from Fascism, a detail they always forget). 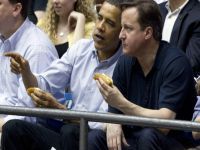 "Mine is bigger than yours"

Is the western public really so easy to dupe?

For a real picture of what is going on in Syria, let us use Syrian sources and not western media lies and let us also remember that there exists something called responsibility in the media.

In my thirty-five years as a journalist working in the printed and electronic media and also in production of television documentaries, after working in daily and weekly newspapers, monthly news magazines and internet media, I have been privy to information which if I had used it, would have destroyed careers. Did I use it? No, I did not.

Why? Because I believe in something called responsibility of the media, because I believe common decency and good journalism can and must work together if we are to wake up in the morning and feel good when we see that reflection in the mirror and because I do not believe that you have to sell your soul to the Devil, insert a microphone in a toilet bowl or invent pure barefaced lies to sell a story.

However, these days it is a little more complicated than that, is it not? It is no longer about paparazzi taking a cheeky or intrusive snapshot of someone having her financial advisor doing to her what all financial advisors do to their clients, it is more like creating a riot in your back garden so your plants get watered by the police using water cannon so that you can escape the hosepipe ban.

Manipulation and propaganda yes, news no

Remember the fact that Colin Powell's evidence at the UNO turned out to be photographs of milk factories, that the "direct evidence" proved to be a ten-year-old thesis copied and pasted from the Net, remember the suicide of the specialist Dr. David Kelly? So who was lying, Saddam Hussein when he said he had no WMD or Bush when he said that he did?

Remember Afghanistan? Our boys over there to make the streets of Washington and London a safer place? From whom? Al Qaeda? There has not been a credible link between Afghanistan and Al Qaeda for around a decade. The ones they are fighting in Afghanistan are the Taliban and they are simply defending their country against foreigners.

Remember the interview Mohammed Omar gave to Pakistan's Dawn magazine back in the nineties (since vanished from the Internet) in which he claimed that Afghanistan would be attacked soon (way before 9/11/2001)? Remember the American intentions to bring pipelines across Afghanistan from Central Asian oil and gas reserves? Remember the mineral wealth of Afghanistan?

Remember Libya? Remember the stories that Colonel Gaddafi was indiscriminately shelling innocent civilians and bombing cities, murdering hundreds of people? Remember when this was proven to be a load of codswallop?

Remember the French panicking because the Libyan Armed Forces were two days away from victory over the terrorists the west had backed against him? Remember what these terrorists did? They sliced the breasts off women, raped, torched buildings, murdered, impaled boys with iron bars, slit the throats of Negroes, and committed ethnic cleansing. Remember who called them "freedom fighters" or "activists" and applauded what they did?

And now we turn to Syria, very much in the focus of the news channels and newspapers. Last night I watched a debate on SKY News, whose lies during the Libyan and Syrian campaigns have relegated it in my eyes simply to a source of corporate propaganda and nothing more; I was shocked at the naivety and shallowness of the comments, or was it a sinister attempt at media manipulation of public opinion?

So suppose someone starts telling the truth about Syria? Suppose someone started saying that the "Assad Government" is fighting back against terrorists armed by the West to overthrow his Government because the West wants to get a foothold in Syria as the last stepping stone before Iran is attacked, while HAMAS and Hezbollah are trashed, and while Russia's last Mediterranean base is dismantled.

Suppose someone started reporting the facts from inside Syria, not conjecture that all killings are the responsibility of Government troops. What about the three thousand police and security forces murdered. By whom? Innocent and unarmed civilians? Like the "unarmed civilians" in Libya one supposes?

And suppose we consider that if you do not arm terrorists and set them loose inside a sovereign state, the sovereign state does not have to fight back, does it? Blaming Russia for "arming Assad" is as ridiculous as not taking the blame for arming terrorists inside Libya and Syria and accepting total responsibility for what they did. Does Russia have boots on the ground in Syria? No? Then why does the west and why did the west in Libya?