David William Donald Cameron is in the United States of America. Planning to sell British submarines? Scolding Obama because yet another of his troops ran amok, started behaving like a pukka savage and put his chaps at risk? Back-slapping and giggling at how the FUKUS-Axis slaughtered the Gaddafi grandchildren? Or selling the Crime of the Century? 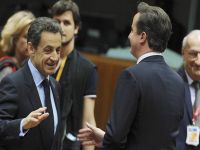 Well, what will it be?

David William Donald Cameron's presence in the United States of America is ominous and opaque and something sinister and scary lurks and lunges in the shadowy side-wings of the diplomatic to-do list of the FUKUS-Axis (France, UK, US and Israel). With William Jefferson "If only they knew" Hague busy cavorting with Hillary "War Zone" Clinton in New York, we now have David 'Botty' "If I have to pay anything back, then I shall" Cameron in Washington with Barack "What Prize?" Obomber, sorry Obama.

Now, when the British Foreign Minister gets all soppy together with a US Secretary of State and the British Prime Minister gets to bed the US President, something happens and it isn't pretty, neither is its aroma pleasant. Ladies and Gentlemen, methinks they are planning the crime of the century and I will tell you what it will be.

Indeed Supertramp were visionaries back in 1974 when in their song "Crime of the Century" they spoke of "schemes and adventuring", and the rape of the universe. As they said back then "How they've gone from bad to worse" and just before the magnificent instrumental, asked "Who are these men of lust, greed, and glory? Rip off the masks and let's see".

Well after Iraq, isn't it patently obvious? And if anyone has forgotten the strafing of Iraqi harvests, the deployment of DU weaponry, the hundreds of thousands of poisoned and deformed children, the illegal attack outside the auspices of the UNO, the war crimes, the use of weaponry against civilian structures, the wanton wholesale slaughter of some seven hundred thousand people, the Abu Ghraib concentration camp, the acts of torture, sodomy and kidnapping, rape of detainees, urinating in food...

We have Afghanistan. And if anyone has forgotten the deployment of drones across the borders in Pakistan, the murder of civilians, the urinating on corpses, the acts of intimidation against citizens with enraged hounds, the careless and callous imposition of democracy from 30,000 feet, the burning of the Koran...

We have Libya. And let us never forget what happened in Libya, indeed let us never allow the demonic quartet mentioned above forget it either. It was a moment when several dark vortices came together, each one controlled by a different lobby, each one the epitome of corporate greed and each one committing murder in self-defence because Muammar al-Qadhafi's Pan-African humanitarian projects were damaging their filthy self-interest.

The same crimes were committed after the same lies were traded in the UNSC and lo and behold the policing of a no-fly zone turned into a full-scale invasion with members of the special forces of the FUKUS-Axis on the ground, these days probably with a sinister twist: holding Qatari or Colombian "This will earn you a Green Card" passports.

And now, with Turkish and Israeli weaponry in the hands of terrorists trained by the Libyans in Syria - and some of whom apparently are the same scourge which Obama, Clinton, Cameron and Hague applauded as they sliced the breasts off women in the streets of Libya (how would Hillary like that if it happened to her?) as they murdered Negroes for being non-white (what does Obama think of that?), as they murdered the children and grandchildren of Gaddafi officials (how would Cameron feel if it were his family?) and as they tied up and sodomised political figures (how would Hague...well, ok...).

If only they knew, eh what? And if only we knew what they are doing in Syria. It is a carbon copy of Iraq and Libya. And by the way Afghanistan has nothing whatsoever to do with Al-Qaeda. Ask your political representatives the last time there was any credible evidence of Al-Qaeda in the country and the honest answer will be a decade ago because they read the picture and fled elsewhere. Then tell your political representative (s)he is a freakin' liar if (s)he says otherwise.

So one does not need a doctorate to imagine what is on the agenda this time and what scheming, wheeling and dealing will be going on before and after the niceties - you know, when the US President smiles and says Britain is a beloved old friend, (snigger) no really! And the British Prime Minister gets so swollen with pride you couldn't fit a needle in his posterior, smirking self-consciously because the only way Britain can feel powerful is by snuggling up to its ex-(shoot the natives when you see the whites of their eyes, what?) colony because the alternative is (yuck) to climb into bed with France and catch something nasty, called...ooh la la! Sarko (shudder).

Either I am seriously mistaken, or the mechanism has started turning and we are on the verge of a count-down. Let us not let this happen. Surely Humankind is superior to this bunch of demonic murderers? Time will tell and history will bear witness to my words. Let nobody say we were blind and did not see it coming and let the history book contain the names of the four culprits this time around.