Is it intrusion, arrogance or insolence, this western habit of sticking their noses where they were not called, making snide remarks about electoral processes in sovereign states and then suggestions as to what must be done next? Aren't these the same countries whose histories are rife with massacres, slavery and line-drawing on maps? 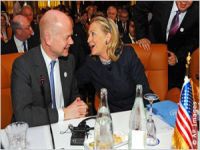 Let us analyse today's statement released by the British Foreign and Commonwealth Office Secretary, William Hague:  "Overall, while the Mission gives a positive assessment of voting on election day, it identifies problems with counting at some polling stations, unequal campaign conditions, and limitations on voter choice. These issues should not be overlooked. A Russia with greater political freedoms, including the registration of political parties, freedom of assembly, and freedom of the media is in the interests of Russians and of the wider world. All allegations of electoral violations should now be thoroughly investigated.

"It is in Britain's interests to develop a stronger and deeper partnership with Russia, by addressing the obstacles to in the relationship so that we can extend our political and trade engagement. We look forward to working with the Russian government to do this."

William Hague was arguably the best leader the Tory Party has had since the heady days of the Poll Tax and the only one capable of matching and occasionally beating Tony Blair in Commons debates, Blair the master of British politics who makes Cameron look like a silly little boy. Britain's Foreign Policy does include a developmental approach on different levels, which is very welcome. However, this does not mean that William Hague is a good choice for Foreign Secretary. In which case, who is William Hague to give Russia lessons in democracy?

Then to the future...

As regards a stronger and deeper relationship, that is for the parties concerned to decide, for civil servants and not journalists. One hopes that the attempts to divide Russia into "pro-Putin forces" and lumping everyone else together into "the opposition" are puerile attempts at dividing to rule and will be abandoned; one hopes that the alleged "Russian Spring" ominously referred to with the label "not yet" in SKY are not precursors to subversive activity and fanning of separatist flames by a hypocritical and cynical Britain whose modus operandi grows closer to its master, the USA, by the day.

However, given the UK's past and present record, only an idiot would rule this out. Given that, who is William Hague to give Russia lessons in democracy?

Now for the nitty gritty...

What authority does William Hague have to opine on the way the Russian elections were run? Let us see his, and Britain's, own record.

This means not arming groups on the FCO's own black list of proscribed organizations, which was the case with the LIFG in Libya, this means not arming groups of religious extremists in Syria. That is against international law. If you arm a group, and call its members "rebels" and "activists" and then use it as a lever to get into a country, you are engaging in illegally supporting one of the sides in an internal conflict, and that is against international law.

This also means having a foreign policy which is clear and honest and straightforward, not an American-style one based upon skulduggery, dishonesty, blackmail, belligerence and bullying, which in turn means not following a "sign now and we'll fill in the details later. Trust us. No, really" policy as was the case with Libya.

The result of these policies is that nobody will ever take Britain's word, or that of the FUKUS Axis to which it unfortunately belongs (France, UK, US and Israel), at face value, ever again. Had the FUKUS Axis explained clearly what it was going to do in Libya, then obviously its illegal and criminal, murderous and terrorist policy would have been vetoed. Speaking of which, what does William Hague have to say in answer to this indictment of NATO and its political and military leaders, already delivered to the Court which bears his name, the ICC in The Hague? (*)

The result of these policies is that Libya is now living a moment of utter chaos, with different armed gangs roaming the country, with a strong Green Resistance vowing to fight for the Jamahiriya, where the groups of FUKUS Axis terrorists are hated, where Cyrenaica (Eastern Libya) has now declared independence. Has Hague any idea of the atrocities committed by the forces he unleashed? Maybe if not, he would agree to allow them to do to his wife what they have done to innocent Libyan women, and then he might have a better idea? How about mass rape, in gangs, how about slicing off breasts in the streets, how about slitting people's throats? Hague and his cronies were responsible for unleashing these terrorists, they are therefore responsible and accountable for their actions, or does Hague sit back and chuckle when they perform their perverted actions against others?

The result of these policies is that together with media distortions, half-truths, mistruths and downright lies, William Hague and the country he represents are as much a risible laughing stock in the eyes of the world community as their masters, the USA, whose lead and collar surrounds their necks.

One only has to quote the alleged antics of the British Bullshit Corporation and SKY News to illustrate the point: one apparently showing a photo two decades out of date, insinuating that millions, rather than a few thousands, were demonstrating against Vladimir Putin and the other, filming anonymous, faceless people making allegations about vote rigging.

No mention in Libya about Muammar al-Qathafi's humanitarian record in his country and in Africa, no mention about what is really taking place, and why, in Syria and no mention that Vladimir Putin is genuinely wanted, liked and respected by two in every three Russians. No mention that if you arm terrorists in their thousands and set them on a rampage, the authorities of a country are going to react. Or are they supposed to do what?

So, who is William Hague to give Russia lessons in democracy? Sometimes, it is better to turn the other way and keep your fat mouth shut, stick your snout in your own business and to **ck off! I mean "back", of course.