Lies on SKY: From terrorist to activist

What is the difference between a "terrorist" and an "activist"? It is easy to say. A "terrorist" is an activist who does not buy weapons from western sources. An "activist" is a terrorist who does. Lies on SKY. After Libya, Syria and after Syria, Russia. The ball has started rolling, the dice have been thrown. Read on... 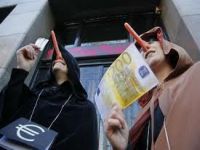 SKY News and its friends in the "bought" squeaky clean international press package are a sinister, disgusting and dangerous gaggle of traders of lies and fabrications while claiming to be serious and to represent the truth. Just who the Hell do they think they are kidding? After lies on Libya, more lies on Syria and now, even more lies on Russia.

One thing is presenting news with a very heavy slant, using biased reporting, paid hacks and an implacable machine to brainwash a people. Another is an objective and independent media willing to hear all sides and presenting a balanced, objective argument.

Until this point, I believe we all agree. Where we start to disagree is where the seams of righteousness based upon Cold War lies start to fall apart, where we start to disagree is where age-old precepts of what is right and wrong, what is good and evil, start to fade away and lose their integrity. We live in a changing world where the globalisation of values is a fact, where the loss of principles and what we used to call common decency is a permanent player and what we are told today, is not necessarily how it is.

Let us take for example SKY News. Flashback: Iraq war (illegal interference and murderous invasion of a sovereign state outside the auspices of the UNSC). SKY News Jeremy Thompson crawling up the legs of US troops "Hey you guys! You looking for some revenge for 9/11 [sic]?"

Libya: SKY News reported that Libyan government aircraft had strafed civilian homes. Fact. Saif al-Islam al-Qathafi asked SKY News to show him the homes strafed by the Libyan Air Force. Guess what happened? They couldn't find any. Virtually none of the western media outlets stated what Muammar al-Qathafi had done for his country and for Africa and that he was to receive a humanitarian prize from the UNO, just as today they refuse to report on the mayhem unfolding inside Libya after the FUKUS-Axis terrorist invasion (France, UK, US and Israel plus Qatar in this case).

So, we start to see SKY for what SKY is. Live on SKY is more often than not, Lies on SKY. In Syria, "terrorists" are now "activists". What is the difference between a "terrorist" and an "activist"? It is easy to say. A "terrorist" is an activist who does not buy weapons from western sources. An "activist" is a terrorist who does.

And in Russia? In Russia, we have a SKY News correspondent running around, filming and quoting as "sources" anonymous people off-camera, who are claiming that the Russian elections are rigged. So how credible is an anonymous faceless source who asks not to be identified or filmed? As credible as saying "Breaking News! I heard someone said that she heard a lady in the bakery claiming her hairdresser had told her one of her clients' second cousin's half-sister's lesbian girlfriend had said that she'd read somewhere that somebody heard on some radio programme that David Cameron fell off a horse and banged his head and that was when he started dating girls".

Making libellous claims about rigged elections is the prerogative of any Russian citizen. Interfering in a foreign country, going around finding "anonymous" sources and quoting their lies as fact is downright scandalous and is a true indicator of where the heart and mind of SKY News lies - in lies, in insolence and in intrusion.

SKY News belongs to the cesspit of gutter journalism and their headline on Monday will be some nonsense about Putin winning a rigged election. Translation: SKY News in particular and the western media in general have as much grasp of the reality in Russia as they have of life on Jupiter. Plus it is obvious what they are trying to do: take away the Russian President's legitimacy to weaken him. Well, ladies and gentlemen, that is NOT going to happen. Putin is the right man in the right place at the right time.

Vladimir Putin does not need to rig an election to win in a country where he is respected and loved, where two in every three people, at the very least, if not four in every five, see him as a respectable leader who represents the interests of his country, who stands up for Russia and her traditions and culture, who places Russia on the centre stage of world affairs and who represents an intelligent and balanced domestic and foreign policy based upon the rule of law, based upon the fundamental precepts of democracy which are debate and discussion and dialogue.

What part of that does SKY News and its western media pigs not get?