So, the Washington Post has come out. Draped among its rainbow colors are posters of Hillary "War Zone" Clinton, complete with new "butch-style trucker" look, a foul snarl on a foul mouth which vomits insolence, arrogance and overbearance. Wow. It took them three whole days to come up with a disappointing hastily-written pile of drivel. 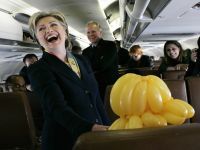 It took the Washington Post and author Al Kamen three whole days to write part of a column on my article "Despicable is Hillary Clinton", published last Sunday in Pravda.Ru's English version, dubbed "over-the-top" in the piece "Pravda sticks it to 'trucker-type' Clinton" in the section In The Loop, published on February 29. If this is the best the Washington Post can do, maybe it is better they stick to the policy of February 29 pieces so we only have to deal with them once every four years.

One knows educational standards in the USA are falling, as we can see only too clearly by reading what people write, where the spelling and grammar are so basically flawed that one can only suppose the speech over the pond is reduced to belching or grunting monosyllables. How they can come out of school after twelve years and not know the difference between "its" and "it's", or "there" and "their", defies logic but what to expect from a country whose Washington Post, once a flagship publication, states that Pravda "formerly a commie house organ and now apparently in that same mode"?

The author, and his editors, have clearly not even bothered to research where Pravda.Ru is positioned and what has happened inside Russia since 1991, which figures, from a country where a Secretary of State can claim loud and clear that she stepped off an airplane in Bosnia in the middle of a war zone, when in fact the "guns" were trumpets, the "grenades" were cymbals and the "trench" was a pristine clean neatly rolled-out red carpet.

The author then goes on to call the rest of my op-ed piece "incoherent" but fails to explain why, when his own piece falls apart spectacularly, and for me, shockingly, after paragraph five. One can only imagine the piece was written hurriedly before publication or else perhaps after lunch?

While the Washington Post piece tries to justify Washington-proper's animosity towards and demonology against Syria, claiming that the Armed Forces bombard women and children indiscriminately, it makes a series of mistakes.

Firstly, it claims that Gaddafi was not shelling women and children indiscriminately...so where was the Washington Post when the FUKUS Axis (France, UK, US and Israel) was strafing civilians in Libya with military hardware to "protect" them from the Libyan Armed Forces? Where was the Washington Post when the western media was rife with stories about massacres by the Libyan Armed Forces against civilians, where was the Washington Post when the western media outlets trained their cameras (with permission from the Libyan Government) on screaming kids in hospitals, before lying, that is, that they had been attacked by Libyan Armed Forces and not by the FUKUS Axis' warplanes (cowards dropping bombs on water supplies and electricity grids from 30,000 feet "to break their backs") and the terrorists they unleashed? These lies by the western media against Colonel Gaddafi were exposed in this column time and time again yet they continued to be printed and shown on TV and espoused by War Zone Clinton.

Now secondly, fast-forward to Syria, where the same accusations are being reiterated. It is patently clear that the Washington Post and its trucker-type friend deserve zero credibility; the paper has lost all of its prestige and has become a worthless rag of the most putrid and unpleasant kind, which I for one would not use were it the only pile of paper lying beside my toilet bowl. Claiming that the Syrian Armed Forces are indiscriminately attacking women and children would be the same as claiming that the man occupying the White House was a serial paedophile (*), yet that is what the Washington Post claims.

How to respond to claptrap like that? Unfounded and wrong accusations it is easy to put to paper, what is more amazing is that a newspaper which claims to be respectable actually prints it. The Syrian Armed Forces are fighting against terrorists, armed and aided by external forces.

The solution in Syria and to the Syrian question is crystal clear and is hardly rocket science: stop arming terrorists and the Government will stop fighting them. However, Hillary "War Zone" Clinton has gone the way of her predecessors, namely instead of honouring the flag she represents, consigns it to a sodden rag not even fit to clean the sodomised posteriors of the victims of illegal detention by US "just havin' fun" personnel.

Instead of forging friendly relationships with the world community, instead of using Obama's reset button, what does Despicable Hillary "War Zone" Clinton do? She cavorts with the FUKUS Axis, arming terrorists and racists and rapists and sexists in Libya, groups which she purports to abhor, does the same in Syria and then derides with insolence those who stand up for international law after she and her friends have broken it.

Russia was ready for a reset. It is obvious that Washington, once again, cannot be trusted. In fact, trusting Washington as a bed-partner is the same thing as sleeping with an AIDS-ridden syphilitic stinking whore with zero morals and expecting to climb out of bed with your health or wallet intact.

If the Clinton camp was furious with my piece, then suppose Despicable War Zone Hillary started showing some respect first if she wants any back, suppose she remembered that when you call others "despicable" the chickens can come home to roost and that if she can't take the heat, then get out of the kitchen.

(*) Let it be clear this is not an accusation, it is an analogy. War criminal, yes; paedophile, not as far as we know.