The incredible hijacking of the word Freedom

Freedom, a word so much used during the Cold War period and repeated so many times, that one began to get suspicious. And the more time that elapses, the more obvious it gets that those using this word were abusing it, so tenuous were their arguments based upon lies and so thin and fragile their glass roofs. Their freedom is a chimera, an illusion and a fraud. The conclusion is that Freedom is a meaningless word describing a notion that does not exist. 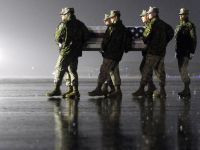 There are certain soundbites that bite deep into the collective conscience of humanity, words and catch-phrases which light up hearts in the darkest depths of despair and the word Freedom, carefully nurtured and shaped into our collective conscience by a biased and brainwashing media, is one of them.

Freedom is a word which is today much used in the corridors of London and Washington, as they gear up for war with Iran and try desperately to explore all the avenues they can to launch a savage and murderous attack against the people of Syria, now that their terrorists have failed to make their mark. It is also a word which will be bandied around the corridors of Geneva in the forthcoming days as the United Nations Human Rights Council meets.

How free were the people of Libya to choose whether they were governed by the all inclusive and racially tolerant Jamahiriya system (government by people's councils) or the murderous scourge of racists and rapists and torturers and thieves unleashed by the FUKUS Axis?

How free were the people of Iraq to choose whether their civilian structures were bombed by NATO military hardware? How free were the thousands of children a day murdered by US sanctions over the years? How free are the people in western countries to choose whether their foreign policy is dictated to them by NATO? Has anyone elected NATO? Then why is it controlling foreign policy as a supra-national organism and who pulls its strings?

How free was the British businessman extradited to the USA because Washington told its poodle Britain to do so, to have a free and fair, open trial in his own country, because he was caught in a CIA sting operation, when he was transporting what he thought were spares for cars?

How free are the people in Guantanamo Bay, held for years without the right to due legal process, without the right to a lawyer, to see their families, or even to answer a formal accusation? How free were those people detained illegally in Abu Ghraib concentration camp in Baghdad, when they were beaten and kicked senseless by American cowards wearing jackboots, when their food was urinated in, when they had dogs set upon them? How free were they when they were being sodomised by their perverted and demonic jailors?

How free is the average citizen to choose his destiny, to shape his Government's policy? How free are people living in political systems in which a minority can be elected into power and impose their policies upon the majority who did not vote for them?

So suppose those hijacking the word "freedom" used what it stands for in their policy instead of abusing it?