The Demonic Duo - Cameron and Sarkozy

David and Nicholas, standing side by side trading pleasantries about oh! how brave, oh! how wonderful they found their counterpart, while the other stood looking on with gooey eyes, smirking self-consciously, shuffling and squirming in mock embarrassment. Did someone shout "Get a room, you two!"? 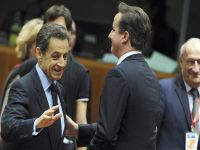 The dynamic duo, congratulating themselves for what they did in Libya, and now making silly noises about the "unacceptable situation" in Syria. Unacceptable? That is a strange word for the two who breached international law, whose forces committed murder, who represent two nations whose history is steeped in massacres and horrific imperialistic atrocities from one side of the globe to the other.

If David and Nicholas are satisfied with what they have done in Syria, maybe they would like the terrorists they are praising to do the same to their wives as they have done to countless innocent women in Libya. If they are so satisfied with what they have done, I invite them to sit with me and to watch the shockingly sadistic videos of the troops they unleashed slicing the breasts off women in the street, cutting the throats of Negroes, raping little girls and committing acts of sodomy.

On second thoughts, they might regard it as entertainment and sit there prodding each other, giggling.

We all know what David and Nicholas did in Libya and they have been indicted for it (*). And we all know how wrong they got it, despite their claims, in which sheer pig-faced arrogance vies for pride of place with total ignorance. They planned it way in advance, they lied, they created false flag events and they breached the UN Rules. Cameron and Sarkozy's escapade in Libya was evil and illegal.

And now Syria. Here they both are once again: Cromwell and Napoleon, the demonic duo. Needless to say, the modus operandi is the same; the hype is the same, the lies are the same. The special forces are already in action, training terrorists, arming terrorists, committing terrorist acts and trying to blame them on the Syrian authorities.

Unacceptable, is the covert involvement of Britain and France behind the scenes, trying to create problems, stirring up trouble and sowing media lies. For example, where do Cameron and Sarkozy, the demonic duo, reveal that the terrorists sowing this chaos in Syria have demanded that the Palestinians either leave Syria or else will be massacred? Now does that sound like unarmed civilians being attacked, or does it sound like the terrorists the demonic duo unleashed in Libya?

And where have the dynamic duo mentioned the fact that organizations such as Human Rights Watch are doing more harm than good with their biased reporting and mistruths?

And why didn't the "journalists" watching this sickening display of camaraderie confront the demonic duo with the following? For instance, a note from Ambassador Ford in Syria stating that there is a satellite photo of operations in Homs: "Security Operations in Homs", taken on February 6, 2012, when there is a copyright stamp on it stating: "© 2011 Digital Globe".

What do the demonic duo have to say to the following question: Why do Syrian sources point out that the "artillery positions" apparently deployed against civilians are in fact taken in military headquarters, of equipment lying in storage and not being used? When there is an engagement, why is it always very nebulous, never clear, and why is it attributed to only one side?

In fact, scores of pictures providing "evidence" so readily used by the demonic duo and their media circles have been and continue to be ridiculed by Syrian sources who know what they are talking about.

Suppose the demonic duo spent their time putting their own houses in order, and if they have anything to do on the overseas stage, then have the decency to apologise for being responsible for practically every single conflict and hotspot that exists on this planet?