The Insolence of Obama

President Obama may be a lot of things but one thing he most certainly is, is insolent. On receiving the Chinese Vice-President Xi Jinping, the man who insulted the Nobel Peace Prize and is now labelled Obomber dared to lecture his guest on human rights. One hopes that Xi Jinping answered him in kind. 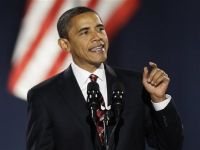 One hopes that the Chinese Vice-President had the guts to respond in kind but one fears that he may have been too polite to answer as follows: Neither does the People's Republic of China opine when the United States of America invades countries illegally outside the auspices of the United Nations Organization, nor does the USA have any right to stick its nose into the internal sovereign affairs of another country, especially when most of the trouble around the world is caused directly by the USA's arming terrorists or supporting internal dissent or else by the imperialist designs of its dearly beloved allies.

I apologise. I replace the word "most" with "all".

One hopes that Xi Jinping told his insolent host that China did not invade Iraq after lying at the UN Headquarters about "fantastic foreign intelligence" which turned out to be British bullshit that the Iraqis were procuring yellowcake uranium from Nigeria (when the country producing it is Niger...same difference, they're all dark, eh what?) and a decade-old doctorate thesis copied and pasted from the Internet about what Iraq might have...but didn't.

It was not China that drew up lists of artefacts from Iraq's archaeological sites and handed them to the Vice-President ahead of the invasion, it was not China that totally destroyed a State and the livelihood of millions of people for some energy war and to pander to the whim of the lobbies surrounding the criminal Bush regime.

It was not China that illegally invaded Libya, illegally armed groups of terrorists in an internal conflict, consorted with groups on NATO's own terrorist lists and murdered civilians, destroying civilian structures with bombs and missiles. It was not China that murdered the grandchildren of Colonel Gaddafi and then sat back with a chortle and insinuated "they shouldn't have been there" as the Israelis say when they attack schools with phosphorous bombs.

It is not China that turns a blind eye to Israel's nuclear arsenal while bellyaching about Iran, it is not China creating false flag events in Syria and itching to conduct a chemical attack to blame on the government in Damascus, it is not China that arms terrorists across the globe and then blames the insurrection on governments unfriendly to Washington's banking, weapons, drugs and energy lobbies.

What was that about human rights, Mr. Obomber? Ah and congratulations on wiping your backside on the Nobel Peace Prize. After all, they considered giving it to Bush and Blair after Iraq, so... What to expect from a....man?....who uses packeted chilli powder in his chilli con carne recipe; and come to think of it, since when does the President of a country present a foreign dish on his website?