According to the opinion polls Putin is firmly on track to receive an overwhelming majority of the votes and win already in the first round with at least 60%. But this is not what the Russian opposition and their western puppet masters want us to think. They are very actively engaged in a concentrated effort to misrepresent the results of the opinion polls. The idea is to make people think that Putin does not have enough support to possibly be elected in the first round. 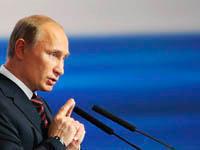 In support of this falsification of truth the opposition leaders refer to distorted poll results which do not address the real issue in question, the predicted support of candidates in the elections. They refer to the three major Russian pollsters and take one factor out of context and falsely claim that it represents the intention to vote. The argument is that Putin is due 37 to 53% of the vote, that is, that the support in the best ideal scenario for Putin would reach barely over 50%.

From here they want the public to draw the conclusion that Putin could not possibly be able to win in the first tour "without massive fraud."  Unfortunately the opposition is aided here not only by the western press but also by the Russian pro-government media and pollsters close to the government. The problem is that the latter present partial findings of the polls as if they would be predictions on support. This way Putin is according to the VZIOM  poll, said to be getting 53.3% of the vote in the first round, although this is only (according to that poll) the support of those that already decided to vote for him.

Considering that all the votes have to add up to 100%, we are faced with the dilemma that the other four candidates are due only 26.4%, and that makes - 79.7% in total for Putin and the others. Oops! We are missing 20.3% to get to the mathematical 100%. Where did the remaining percentages disappear? The remaining belongs to those that replied that they are not sure or will not vote. But in an actual situation these will either vote for an actual candidate or not vote at all, but in any case the corresponding percentages will be distributed between the actual candidates to reach the sum total of 100%. And as Putin has the support of 53% of those who have decided, we may predict that he receives about half of the left-over also, that is, half of the undistributed 20.3%. Thus the total first round vote prediction for Putin stands today at the level of 66.5% (53% plus his proportional share of the 20.3%, i.e. 53+13.5).

We will take a look at the other two pollsters below, and now we will return to the scheming opposition leaders and their western cheerleaders. The western press has been engaged on all fronts to lend credibility to this lie. For example, 14 February BusinessWeek of Bloomberg did just that in an article headed Putin Opponents Say Forced First-Round Win Would Harm Legitimacy.

According to the article "opposition groups, who staged the biggest ever anti-Putin protests over alleged fraud in December parliamentary elections, warned that a first-round victory in the March 4 vote would trigger a wave of larger rallies." "Putin should be interested in a run-off if he wants to remain a legitimate ruler," advises Sergey Mitrokhin "of the pro-democracy" Yabloko party, however, being convinced of the opposite he adds: "But he's afraid of that and it looks like they will force through a first round win. "And although the opinion polls demonstrate clearly the contrary  (as is evident from my present analysis), the article cites the notorious opposition activist Garry Kasparov saying "I've no doubt that in Moscow on March 5, you will see massive protests because for Putin to win, he will need even more violations of the laws of mathematics than they conducted on Dec. 4." - But I note that it is precisely our dear chess master and his clan that experience the great difficulties in managing the equation of getting the figures to add up to 100%.

Alexei Navalny, a blogger, who also has problems with arithmetics, chimes in: "If there isn't fraud and Putin gets his 40 percent on the first round and wins fairly in the run-off, of course it will significantly reduce the chances of mass protests." However, as he wants us to think that the Communist candidate Zyuganov, whose real support in the polls is around 12-14% could possibly win over Putin he gives his weighty verdict:  "they are going for a fraudulent victory on the first round rather than risk the uncertainties of a second round." (According to a Levada poll of 2 February in case of a second tour between Putin and Zyuganov the former would win with 75% to 25%).

In support of the faulty mathematics of these tireless fighters for the truth, BusinessWeek cites the above referenced misrepresented opinion polls with the insistence that Putin would garner in the first round 37% according to the Levada poll, 47% according to Public Opinion Foundation (FOM), and 53% according to state-run All-Russian Center for the Study of Public Opinion (VZIOM). Just imagine. These people engaged in a massive fraud of misrepresenting the opinion polls are the ones that accuse the government that the elections were falsified! Sic transit gloria mundi. - But nobody should think that this publication would lack the needed specialists for actually making a correct interpretation of the polls. Sic transit gloria mundi.

It is about time that Russia's patriotically minded media starts to tell how things are in reality, or otherwise the orange protests might turn quite ugly.

Above we already looked at the VZIOM poll which was claimed to allocate 53.3% for Putin but actually showed 66.5%. I naturally admit that the statistic methods behind the polls are a bit more complicated than this in the details. The pollsters should correct the data according to their real experience of historical trends, among other issues considering the trend of increase in support. (Putin's trend is now on the increase). This would lead to adjustments in the simplified methods which I accounted for above. But, in any case the unadjusted figure is totally incorrect and misleading. The news of the VZIOM poll should not have been that Putin has a 53.3% support in the first round, but that he is in line to collect some 60 to 65 percent of the votes.

Levada plays the same game, although worse yet. In a poll of January 25 (they have not dared to publish a new one) they declare that Putin's support in the first round would be 37%, the other candidates receiving in total 23%. That leaves 40% out of the count. Levada has been extra crafty in deceiving the public, for they have added one more nonsense question in the total. In addition to the standard "Not sure" and "I will not vote," there is a third one, this is an insidious combination of the two former ones yielding: "Not sure if I will vote." This is how you removed 30% of Putin's support from the polls! In the future we may expect Levada to put even more intriguing questions alongside the candidates so as to further dilute the support they assign to Putin. So perhaps the respondents will be offered the suggestions: "I enjoy my holidays," "My family is more important than the elections," "Most of all I wish for the winter to end," etc. By such creativity Levada will be able to prove to the "free press" that Putin has no support at all.

Finally FOM has made a more intelligent effort and they actually offer a real adjusted prediction which allocates Putin 60% of the vote in the first round. Nevertheless this is not what gets into the news, instead all the media, foreign and Russian, anti- and pro-Putin, refers only to the first part of the poll, the same nonsense without the adjustments. According to this Putin would have a support of 47%, the other candidates in total 24%, and the ghost candidates 27% (yielding in total the astonishing figure of 98%).

Somebody should wake up!