The Negev Coexistence Forum has some shocking revelations in its alternative report to the UN Committee on the Elimination of Racial Discrimination, in this case in Israel, against the Bedouin population in the Negev-Neqab, to be reviewed on February 15 and 16. The allegations in the report expose Israel's violation of the legally-binding ICERD. 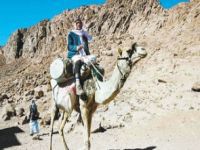 The International Convention on the Elimination of All Forms of Racial Discrimination (ICERD) is legally binding on all nations, even Israel. It also provides a framework for indigenous populations to point out cases of racial discrimination, and that is exactly what the Negev Bedouin are doing. Moreover, as a signatory state, Israel has the obligation to comply with the provisions of this document. We shall be following this case here.

The report presented by the Negev Bedouin to the UNO (1) is shocking. It underlines the systematic implementation of racially discriminatory policies, laws and practices by the State of Israel, favouring the Jewish population over indigenous citizens. The international community, so proactive and so interested in the affairs of other areas and regions, remains predictably silent. After all, who are the Negev Bedoiun?

The Negev Coexistence Forum, established in 1997 and comprising both Arab and Jewish residents of the Negev, complains that in Israel "the state unequally distributes services and access to resources and land, attempts to concentrate the Bedouin into specific townships and fails to recognise traditional rights to land. Further, unlike Bedouin villages, not only have Jewish farms in the Negev recently been retroactively approved by the state but ten new settlements have also been approved. Thousands of Bedouin, on the other hand, face forced displacement under the proposed Prawer-Amidror Plan that was formulated with barely input from the Bedouin community and approved by the cabinet on 11 September 2011."

The "unrecognised villages" which for the State of Israel are at the same time illegal and unrecognised, do not have basic services such as running water and electricity, telephone lines and waste removal facilities, paved roads, medical clinics and schools but the settlements where the Jewish residents are moved to have these. The homes of the Bedouin are forcefully demolished, the Government-planned towns are not equipped to receive the 30,000 residents, contrary to Government claims.

"These towns rank at the bottom of all social and economic indicators and suffer from the highest unemployment rates in Israel. Most Bedouin reject the proposal in any event and refuse to renounce their claims and abandon their ancestral land. The Bedouin are a traditional society and most wish to maintain their agricultural lifestyle rather than moved to developed towns," claims the NCF.

The serious human rights violations to be investigated by the UNO and for which Israel is legally bound to answer and to be held accountable include the lack of provision of basic services, forced deportation, demolition of homes, destruction of crops - and in the case of home demolitions, those who lost their houses have to pay for the demolition costs.

"This report documents a number of significant developments over the past 12 months. Most significantly, the number of home demolitions more than doubled to 1,000, reflecting the intensification of the state's aggressiveness towards its Bedouin citizens. Further, on December 6, the Magistrate's Court cancelled 45 demolition orders in the village of Alsira, however, the same court the following week rejected a request to cancel 33 demolition orders in the village of Atir Um al-Hiran. Finally, in an operation known as "Determined Arm", 33 homes in a single week in November were demolished.

"Policy decisions negatively impacting the community are also highlighted. For instance, on September 11, the Israeli cabinet approved the Prawer-Amidror Plan that, if implemented, will result in the eviction of 30,000 to 45,000 Bedouin from their homes and the demolition of entire villages. Further, on October 30 the government approved the establishment of 10 new Jewish settlements around Arad, some of which will be built on the sites of Bedouin villages", states the report.

If Israel wishes to be taken seriously as an integral member of the international community, isn't it time that its Government started acting like one? It starts at home. And another question: What do those nations that blindly back Israel in all it does have to say about this? It is an internal affair of a sovereign nation? Right, well that precept seems not to be applied universally.