Whose side is the UNO on?

After reading the statement on Syria by UN SG Ban Ki-Moon, the notion arises that far from being impartial, the United Nations Organization is in fact two organisms - one, a humanitarian institution to pull the wool over our eyes and the other, to pander to the geo-political caprices of its master, in whose house it is a guest and a hostage. 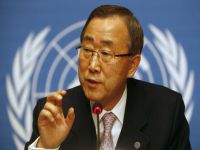 If the United Nations Secretary-General were totally impartial, if the UN Secretary-general respected his position and the institution he represents, there would be as many declarations from him denouncing the war crimes and breaches of international law by the FUKUS-Axis (France, UK, US and Israel) as there are deriding their enemies, as was the case against Libya, as is the case against Syria.

However, as one may have expected, this is not the case. His constant rebuttals and accusations against the Government of the Libyan Arab Jamahiriya rang loud and clear, as it tried to defend itself and its people against murderous gangs of FUKUS-Axis backed thugs - torturers, murderers, rapists, racists, arsonists, looters, thieves, sodomists and serial sexual abusers.

However, where was he when the FUKUS-Axis was strafing the Libyan water supply, to "break the backs" of the civilians and deprive families with babies of drinking and bathing water, in the North African mid-Summer? Where was he when the FUKUS-Axis was placing special troops on the ground, despite the terms of the UNSC Resolutions 1970 and 1973 governing the crisis stating clearly there was to be no arming of either side, a total arms embargo on Libya and no boots on the ground?

But here is Ban Ki-Moon complaining that the Syrian government forces are carrying out violence which is "totally unacceptable before humanity". Suppose, then, Ban Ki-Moon considered what the Syrian armed forces are fighting? Does he imagine they are shelling unarmed civilians going about their daily lives? Or terrorists armed to the teeth, the ones shown on SKY News, which look just like the thugs we saw in Libya, labelled as "unarmed civilians"?

Why does Ban Ki-Moon not refer to the three thousand Syrian Security Forces murdered by this scourge? Or does he think they were killed by whom, unarmed women and children? Why do Ban Ki-Moon and his FUKUS-Axis friends not tell the truth about Syria, namely that around 55 to 60% of the population supports the President (Bashar al-Assad) around 15% are apolitical, leaving at most 30% supporting around 30 Opposition parties? How much support does that leave each one?

Why don't Ban Ki-Moon and his FUKUS-Axis friends analyse the photographic "evidence" of the "massacres" and reach the same conclusions as Pravda.Ru sources inside Syria reach, namely that in one "massacre" the bodies were Allouites who had been massacred by the FUKUS-Axis backed "Opposition" then placed on the ground, handcuffed, before it was claimed that the Syrian Armed Forces had strafed them with artillery fire; other "Syrian" locations turn out to be photographs from Gaza (without the Israeli phosphorous bombs) and Iraq (without Abu Ghraib concentration camp and its American perverts sodomising prisoners and urinating on them)?

Why don't Ban Ki-Moon and his FUKUS-Axis friends say anything about the "Opposition" protests in which they torched Government and private property and lynched people in the streets?

We know the answers to these questions. In fact, can anyone rightfully claim today that the UNO as a body to enforce international law is valid, efficient or worth the money it costs? In which case, how can Ban Ki-Moon justify his position, whatever that really is? And in which case, does it not make sense to say: US out of UN, or UN out of US?