Mozambique could provide a good case study into what goes wrong in Africa. Before we examine the question, we should remember Muammar al-Qathafi's tremendous work in implementing humanitarian and developmental projects across the African continent, a project destroyed by the FUKUS-Axis (France, UK, US, Israel) and NATO. 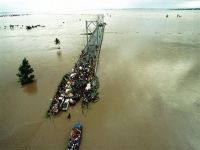 The man who turned Libya into the country with the highest human development indices in the African continent, the country he received as the poorest in the world, was Muammar al-Qathafi, the power behind the African Union, the force behind the precept that Africans have the solutions for Africa's problems and that Africa's resources belong to Africans, not imperialist powers which spent centuries siphoning off and dividing its resources, massacring its peoples, destroying its cultures and societies, polluting its ethnic and social networks and contaminating its future.

These powers are what Muammar al-Qathafi was fighting against and these are the forces which armed terrorists in Libya, sent in foreign mercenaries and unleashed the criminal elements within Libyan society to perpetrate the most shocking acts of torture, rape, murder, arson, destruction, pillage, theft, robbery - racists and criminals, torturers and psychopaths who continue to perpetrate outrages against the good people of the Libyan Jamahiriya because they want "freedom" to drink alcohol and take drugs... aided and abetted by the FUKUS-Axis which looked on and took sides in an internal conflict, wholly against international law.

While it is true that Muammar al-Qathafi did not have time to solve all of Africa's problems, he made a very good start with his telemedicine and e-learning projects, bridging the digital divide, making the Internet available to the entire continent, for free - and funded financial projects which were beginning to make a difference, including in countries with endemic problems such as Mozambique.

Yet again, this year's rainy season has brought tragedy to the country. At least forty people have died and around 120,000 have been affected by two tropical storms which have devastated houses, crops, shelters, schools and churches. Yet again, because this is the sixth crisis in little over a decade.

A cyclone in 2000 killed hundreds and displaced thousands; the rivers burst their banks in 2001, repeating the situation; in 2002, a food crisis ensued after a drought; in 2007 tens of thousands of people were made homeless when the Zambezi River burst its banks and in 2008, the same situation occurred sending thousands of people fleeing to higher ground. In fact, endemic cycles of flood and drought have affected the country for decades.

Seventy per cent of the population lives in poverty, the official language, Portuguese, is spoken by half the population at most; food insecurity affects many hundreds of thousands of people every year; 13 per cent of adults live with HIV; agricultural production is among the lowest in the world despite the fact that the land is fertile.

Only ten per cent of Mozambique's arable land is cultivated, most farmers use sub-standard seeds, four million farmers need food production support; Mozambique has a food requirement deficit of one million tons of food per year.

This is the reality in Mozambique today, in the year 2012. While gross mismanagement by certain officials in the Mozambican Government over the years cannot be ruled out totally, the reality is that the country was torn apart by a devastating civil war from 1977 to 1992, its flames fanned and its fire fuelled by external powers.

If the international community in the twenty years that have ensued has managed to produce the result we see today, what a tragedy it is that the African Union project has now been neutered by an imperialistic FUKUS-Axis which, watch this space, will continue to rape Africa.

Yet let it also be said that Africa, and Africans, stood back and watched while the FUKUS-Axis and its plaything, NATO, raped Libya and destroyed the power of the Jamahiriya Government to make a difference. Where is the new Gaddafi on the African continent, where is the new hero and when will Africa begin to stand up for itself and for Africans instead of cowering like cowards and looking the other way while its Father is lynched?

Author`s name Timothy Bancroft-Hinchey
*
18:54
Ukrainian soldier uses chainsaw and fire to release US howitzer from ice trap
18:30
Onet: Ukraine will lose in six months due to shell shortage
17:36
Russian troops defeat Ukrainian troops in Zaporizhzhia region
14:50
Number of foreign mercenaries in Ukraine continues growing
14:17
Russians buy more than 50 tons of gold in 2022
13:57
Russia will not talk to Ukraine. Russia will talk to the West
13:34
USA's plan to give 20 percent of Ukraine for peace hoax
12:51
Medvedev: Ukraine as a state to be devastated, go bankrupt and be turned into colony
19:57
Russia will use all of its military potential to counter Western arms supplies to Kyiv
18:34
Biden changing strategy on Ukraine to reach diplomatic solution with Russia
Drone with large air bomb on board explodes over Kaluga in western Russia