Sahel: Act now before we have a catastrophe 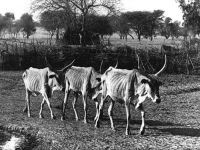 2012. We live in a world in which the choice of a label determines whether tens of millions of people have the right to survive or to die. The definition of the word "famine" is a restricted one and its application, or not, to a situation dictates to what extent the international community responds.

The definition of the word "famine" is a very strict one and dictates whether or not the rest of the world community swings into action with food distribution and medical aid programmes. Whether or not the word is used to label a situation can determine whether millions of people survive, or die. Such is the world we live in. A decision taken in some office by a faceless official assumes a Godlike importance.

In his interview with Patrick Maigue of UN Media, United Nations Organization Special Representative on the Right to Food, Olivier De Schutter, described the current food crisis looming on the horizon in the Sahel region. Around ten million people are affected in Niger (6 million), Mali (2.9 million), Mauritania (around 500,000) and tens of thousands in other countries in the region

Olivier De Schutter was quick to point out that not all the people in the region today are hungry and that as yet there is not a situation of famine. However, the situation and the potential for danger are "quite significant" and there are clear signs that there are difficult months ahead, caused by a repetition of the droughts which occurred in 2005 and 2010.

The good news is that after the drought in the summer of 2011, the Governments in the region appear better prepared to handle the crisis, having built up better stocks of food and having reacted swiftly, distributing resources to where they are most needed. "They have learnt from past crises...and we do not expect the result to be as significant in 2010".

However, having said which, the definition of "famine" is very strict and is only applied when the situation is "very serious", meaning people have to start dying before anything happens. Given that the international community needs time to organise resources in the event of a famine incident, how many people have to lose their lives before help arrives?

Olivier De Schutter is convinced that "if we intervene now we can avert a crisis". But what happens if the situation deteriorates? Isn't it time that the world community had better mechanisms in place than the decision to label a situation as "famine", when people are already dying in their thousands, condemning many more thousands to perish before the necessary food aid can arrive?