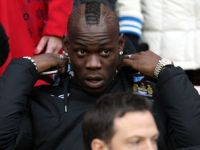 Mario Balotelli is the reason why millions of people are getting turned off by soccer and are following modalities of sport which are precisely that...sport. Soccer no longer deserves that title - it is controlled by a big-business mafia-style octopus laundering money through dubious agents trading the vapid morons kicking the ball around like sheep.

We are speaking about only five clubs in one soccer championship. Soccer has therefore ceased to be a sport - it has become big business and it has turned itself into the opium of the people - get them talking about soccer and the latest gossip on the transfer list and they will not think about serious things, like whether or not they have a pension, whether there is money to send their children to school or whether the National Health Service can fund quality healthcare treatment for their parents when they are elderly.

Instead, they spend hours asking whether a workmate saw that goal, asking how the hell Beckham bends the ball like he bends the English language and whether whoever swore at, spat at or stiff-fingered the goalkeeper, or all three...

Back to Mario Balotelli, an Italian thug who plays for Manchester City FC, who stamped on the head of a Tottenham Hotspur player, Scott Parker, during the Premiership game on Sunday, which City won 3-2 at home in Manchester. This was but one incident which has become the norm and not the exception in a "sport" where players purposefully try to break the legs of colleagues on the field, diving into tackles with both feet forward, trying to catch the ankle of an opponent, or else trying to twist the knee and in Balotelli's case, what was he trying to do, break his adversary's neck? Crack his skull open? If he is an adversary, he is also a colleague.

Anyone who views the video cannot seriously say that Balotelli did not know what he was doing and can see that he committed a vicious and dangerous foul which should render him liable for grievous bodily harm, if not attempted murder. Balotelli should be held responsible for bringing the game into disrepute, for insulting his club, insulting the Premiership and for unacceptably violent conduct, and should be banned for two seasons. Maybe he will learn a little from washing dishes in an Italian café in Manchester being paid 100 pounds a week.

With pigs like that on the playing field, it is a wonder people want to spend their hard-earned cash watching a bunch of spoilt, uneducated overpaid brats kicking a ball around once a week, getting paid salaries which top the 100,000 USD per week level, and in some cases more (I repeat, week, not month), spitting at one another, swearing at one another, threatening one another, trying to put colleagues out of the game and taking their livelihood away from them, then when they are called on to comment on the game, they cannot string three words together.

Role models? My apologies, to sheep and pigs.