The West, Syria and Libya 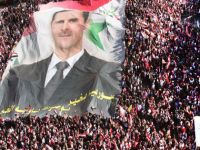 The smirking face of Bashar al-Assad as he made fun of Colonel Gaddafi when he addressed the Arab League in 2008 was as disgusting as the supercilious smirks on the snouts of the pigs surrounding him. Today, Bashar al-Assad is not smirking, for sure, as he sees the West use the same tactics they used against Libya on him.

It is difficult to feel sorry for Bashar al-Assad. Indeed, the immediate temptation is to say "Hey, go and ask for support from the terrorists, rapists and murderers that NATO unleashed in Libya" because let us remember whose side Assad was on when Colonel Gaddafi warned not so long ago that the Arab League either stood together or else would see the fate that is now befalling Libya - in civil war - and which is now to befall Syria - terrorist cells and foreign agents provocateurs sowing havoc inside the country while the west calls on the Government and the authorities not to react.

Who does not react when there are maurauding gangs of terrorists, murderers and rapists running amok, beheading people and destroying property?

So maybe if Assad was publicly trying to humiliate Gaddafi back then as he rubbed shoulders with his pot-bellied pig friends from the Gulf States, he certainly isn't laughing today, and neither will they within a short space of time. As for the west, for the Syria story, basically copy and paste Libya and call it Libya 2, or "Libya remake". The irresponsible journalism is there, muck raking and spreading stories without an iota of proof or back-up, as western journalism confirms it is at the level of "Someone said they heard a woman say in the baker's that the butcher's wife had been heard telling someone that something happened somewhere sometime last week...we think".

It doesn't matter, because the TV images of screaming children swing into action in the early days of an "uprising" (what happened in London last August was a more authentic uprising than the ones in either Libya or Syria) and create the mind-image which will in turn create the mindset that will shape and control public opinion during the rest of the conflict.

We are not speaking about journalism and information, we are speaking about propaganda, unfounded rumours and disinformation and demonization campaigns which attempt to justify the unjustifiable. The Net then backs up the biased media, filtering out any opposing stories, closing sites, blogs, hacking sites, closing Facebook accounts (how porous is that medium?) and taking You Tubes off the air, while the photo libraries are purged of damning images. That is why they are trying to control the Net. It's called freedom of information and expression...

At the epicentre of this is the Queen of Liars, traitors and terrorists, the human hell-hole, residence supreme of the Demon himself, Qatar. Al-Jazeera, which started out as a credible news agency, has become the whore of international journalism and is as credible as the scrawlings of a demented simpleton on the walls of a football stadium.

What is really happening in Syria, we shall be reporting in the forthcoming days. Meanwhile let us tell the story of Libya, which you will not see on Al-Jazeera, nor indeed on the British Bullshit Corporation, its friend and bedmate.

What NATO has unleashed in Libya is hard to describe, because there are no adjectives strong enough to put into words the horrific human rights abuses carried out by the "darlings" of the west, namely the Libyan rebels, in fact, gangs of murderers, rapists, arsonists, thieves, looters, torturers and bandits, racist pigs who have carried out ethnic cleansing, who have kidnapped and gang-raped women and girls and who have hacked people to death.

The people of Libya are not sitting back and accepting this scourge as a Government because it is not and never will be. Southern Libya has now been declared terrorist-free and the result is that the USA, under what international mandate? - is massing troops in Malta, while it sends in waves of Marines to be shot down by snipers.
How many more families in the USA are being told that their sons are missing in action?

Evidence of human rights abuses by Libyan terrorists, supported by NATO:
Judge for yourselves.