Where William Hague - and the UK - got it wrong 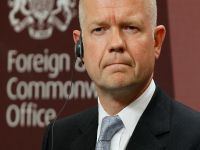 William Hague has begun a public awareness campaign in the international press declaring that 2012 is Britain's year, with London hosting the Olympic Games and the Queen celebrating her Jubilee sixtieth year on the throne. While Her Majesty has done an excellent job, her Governments have not - the last six have been involved in no less than 9 wars.

The circular letter posted by the Foreign and Commonwealth Secretary in the international press this Sunday is a nice attempt to whitewash the wall which he himself and his colleagues and friends among the FUKUS-Axis (France, UK, US and Israel) fouled with graffiti. The letter opens with the message New Year, let's look to the future, then launches into a orgy of introspection and an orgasm of self-congratulatory diatribes, beginning with the Queen's sixtieth jubilee, continuing with London's hosting of the Olympic Games for the third time and then following on with how the Great British public will welcome visitors.

His letter finishes with a mention of the Cultural Olympics at the London Festival 2012, during which the richness and diversity of Britain's culture will be celebrated, calling for the world community to "join us" and (here starts another self-congratulatory rant) discover the UK's heritage and the reasons why it has four of the top ten Universities, why the UK is the easiest country in the EU to open a business and why the UK has 80 Nobel Prize-winners in the area of science and technology.

In short, hey look at us everyone, we're hosting the Games, come and cheer the Queen and be enthralled at how freakin' superior we are to everyone, that's why we think we can go around the globe spreading freedom and democracy from 30,000 feet bombing schools and Downs Syndrome centers and targeting civilian structures with military hardware so that our economy can grow through the rebuilding contracts, murdering children and then not so much as issuing a word of apology, supporting groups that are classified as terrorists on our own lists of proscribed movements and destabilising States for no other reason that our own misplaced imperialistic whims and greedy caprices.

In fact, William Hague's letter comes across as an insulting, shallow and very narcissistic pile of bilge. Nobody outside the UK gives a twopenny hoot about the Queen, however professional she has been in her sixty years on the throne and however much she has provided an excellent figurehead for the country - far better than her governments, the last six of which have involved the nation in no less than nine wars.

As for the Olympic Games and Cultural Olympics, perhaps if William Hague and his colleagues at the Ministry of Defence had respected Libya's culture instead of bombing it to steal Libya's sovereign fund, to steal Libya's oil, to destroy the work and plans of Colonel Gaddafi whose African plans and projects horrified the greedy imperialistic FUKIS-Axis because they would give Africa for once the control over its own resources and would cost the western banks billions, then one would have more respect for what Britain is doing this year.

But instead William Hague backed terrorists, he unleashed the worst scourge from Libya's society against the authorities - the dregs who wanted freedom not of the democratic type but to drink and take drugs - why are so many bottles of Johnny Walker Scotch being distributed to them for free? - he destabilised Libyan society, his unwanted and unnecessary attack (together with his friends in the FUKUS-Axis) has been responsible for acts of rape, murder, looting, arson, theft, wanton destruction of property, racist attacks, ethnic cleansing - all perpetrated by the evil and demonic hordes supported by the Foreign and Commonwealth Office and by the British Ministry of Defence.

You do not saunter into a country after preparing gangs of terrorists to destabilise it, demonise its leader and government, steal its money and resources, let loose gangs of murderers and torturers and rapists and then pretend nothing has happened, become suddenly fascinated with the game of cricket and England's village greens and ask people to come to the UK to find out how (rude word) superior it is.

William Hague's letter is a study in pig-faced arrogance, shit-headedness and downright insolence to the thinking and decent law-abiding members of the world community. As for the Nobel Prize, Hague's friend across the pond rendered that useless by accepting the peace prize and then becoming Obomber. As for science and technology, the one piece of equipment the UK is famous for and its main contribution in these fields is the Crapper.

The indictment against NATO (*) includes the name of William Hague, the man who has done more harm to the reputation and international standing of the United Kingdom than anyone else in the recent history of the country.