U.S. pushing world to the brink of world war

While local U.S. police use excessive force and violence against OWS protesters, the U.S. government continues to attempt to spread "freedom and democracy" of this exact same kind around the world. Reports come in daily about beatings, clubbings, tasering, a female having her bicycle thrown at her and disabled veterans being abused. 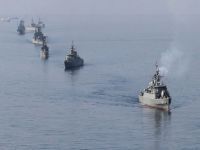 Meanwhile, Libya attempts to free itself from this "freedom and democracy" scourge brought to Libya by thousands of terrorists: murderers, psychopaths, head chopping nut cases that enjoy bodily mutilation even when the body is already dead, raping women, looting, burning. Oh, the joy of freedom and demon-crazy compliments of NATO Nazis.

NATO literally dumped this murderous trash into the country, to fight alongside local criminals and traitors in order to plunder the country's resources. So NATO did more than drop illegal weaponry, including chemical and biological agents...white phosphorous, depleted uranium, sarin. Outbreaks have occurred of tuberculosis due to biological weapons.

The water supply has both been bombed out of operation and poisoned. Western citizen taxpayer money was spent to "break the backs" of Libyans who will not submit to the terrorist government of NTC.

Now to move on to the brinkmanship being created with the Islamic Republic of Iran. My logic tells me that since that government of Iran gave its support to NATO and NATO's terrorists in Libya, a fruitless, thankless ill-conceived decision, that they should be cut loose from my efforts at defense for the innocent. But my sense of humanity won't allow me to do that and abandon them as they abandoned Libya to NATO terrorism.

The people are not the government. These people are descendants of a great culture and civilization who have shown compassion and kindness to their neighbors in distress. They don't deserve to suffer the fate of other victims of western/U.S. imperialism. We can keep trying to succeed where our efforts did not prevent these horrors in the past.

No matter what, imperialism, colonialism and greedy capitalist exploitation must be opposed on every front it rears its ugly head. Other sectarian concerns must be set aside. The left has to get their collective heads out of the sand (I wanted to say something more personal here). Where, pray tell, is the anti-war movement?

Most Americans and westerners, when thinking of Iran, only see images of "hostages" being held, tbey've been taught to moan, groan and whine about it, but mostly to hate, without thinking about what precipitated that event.

You see, Iran had elected a democratic, nationalistic government, that of Prime Minister Mohammed Mossadegh. His government didn't think it was exactly fair that Iran get only 15% of the profits from their own oil, while the remainder went to British interests. They nationalized Iranian oil for the benefit of the Iranian people.

Therefore, a coup against Mossadegh, perpetrated by the United States, put the bloody dictator, Shah Mohammad Reza Pahlavi, into power. He was only too happy to please his benefactors with agreements beneficial to them.

The Shah's government got the help and guidance of the CIA in creating the Iranian SAVAK, a vicious, brutal, fearsome secret police, something that the Iranian people can hardly forget.

Then the United States armed and instigated Iraq to attack Iran, with the unspoken goal of weakening both countries. They provided the very chemical and biological weapons they demonized Sadaam Hussein for. They also introduced nuclear energy to Iran. How's that for irony?

The U.S. is fast becoming a hopeless case unless the people wake up. All presidental candidates want war with Iran with the exception of one (not likely to be elected either probably for that very reason).

Western instigated wars are fought to keep the military industrial complex booming, read rolling in cash, controlled by the one percent elite, while everyone else has to pay the enormous costs that allow that privileged elite to get richer, fatter and more arrogant.

In the process, jobs are lost, taxes go up, homes are lost to foreclosure, people are denied a health care system because millions are spent on the propaganda designed to create the illusion that hard working fellow citizens don't deserve health care if they cannot afford it, it's just that horrid thing known as socialism.

But the same people think nothing of the multi-million billion trillion dollar welfare handouts to the banks and corporations. They think nothing of the trillions being spent for war operations, bombs and keeping bases overseas...but heaven forbid a poor person get a stinking $100 bandaid in an emergency room with a national health insurance.

There have been a succession of incidents that in essence are acts of war against the Islamic Republic. First, there were the Twitter terrorist attacks at election time. There was the Stuxnet cyber attack.  There have been explosions on Iranian military facilities. Several Iranian scientists have been murdered. Then the drone flights to conduct espionage which culminated with Iran's downing one such craft.

The west moves for more and more crippling sanctions. Never forget to learn from history...that every war has begun with the imposition of sanctions. The result? We stand precariously on the brink of confrontation...

The senior commander in Iran's Revolutionary Guard, Ali Ashraf Nouri, said that the Iranian government has made the decision to close the Strait of Hormuz where a significant portion of the world's oil passes if the country's oil exports are blocked. There is nothing that gives justification for such a blockage.

Then from the other side, an American threat:

"We made very clear that the United States will not tolerate the blocking of the Straits of Hormuz," Panetta told CBS television. "That's another red line for us and that we will respond to them."

Really, the Americans should take that "red line" and cram it where the sun don't shine, who gave them the right to cross the ocean thousands of miles away and bother these people who have done nothing to no one?

U.S. behavior in making threats and taking actions against Iranian rights to develop peaceful nuclear energy are in violation of the Nuclear Non Prolifteration Treaty and the UN Charter in threatening war. Yet the mainstream western corporated media does not communicate these facts to the public.

With all the ships converging in close proximity in the Strait of Hormuz, an ideal opportunity presents itself: The sinking of the USS Maine, the Gulf of Tonkin, the Korean ship sinking they tried to blame on the Democratic People's Republic of Korea... American or Israeli ships or aircraft can be given Iranian markings and attack a U.S. ship in order to serve as a false flag pretext for starting a war with Iran.

Millions of lives will be lost in the process as the U.S. and Israel are conducting operations in close proximity to Russia, making it entirely possible for the atmospheric contamination to carry over by weather patterns onto the territory of Russia. Russia cannot tolerate this situation.

In Libya, we have seen how drug addicts, alcohol fiends, psychos and rapists have been used as cheap short cuts to achieve resource grabbing. The world is already quite familiar with the lies, the false flag operations, the need to create an excuse to start something frequently used by the U.S.A.

The world community needs to cut them off immediately in such an instance, and not give them any sympathy or support, just the opposite. If people allow these things to happen and progress as in the past...2012, if the world manages to survive until the end of it, will be a year fraught with unknown danger.

Anybody fancy waking up in the morning as a glow in the dark vaporized skeleton? Very possible, very possible...!