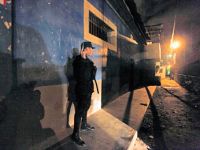 The year 2011 provided us with a telling insight into where our planet is going, into how our community of nations is developing and to what extent hypocritical international relations compromise the western regimes which have spent decades bawling obscenities about human rights but which then present study cases into the worst type of crisis management possible.

The year 2011 also provided us with the most noble example of human bravery, namely the controlled and courageous response of the Japanese people after the tsunami and nuclear crisis yet also the most vile example of human hypocrisy as western powers attacked Libya, trying to destroy the Jamahiriya system of government, targeting civilian structures with military hardware, supporting terrorists and breaking every law in the book in terms of international relations.

The indictment served against this act was received by the International Criminal Court and was received by the European Court of Human Rights. It is annexed to this article (*). It did not receive even the courtesy of a reply from either institution, meaning that these two legal institutions and more in legion with flouting the law than defending it, because for those who read the terms of the indictment, the truth is clear for all to see.

Shame on those who perpetrated these crimes against humanity, shame on those who derided Muammar al-Qathafi in the international media without referring to his immense good deeds, his Green Book and his humanitarian record which was going to see him honoured by the UNO.

International law exists and despite the fact that there are pariah states in the world which wish to flout it, it exists to be respected and implemented. On one side we have the ascendant BRIC block, Brazil, Russia, India and China. On the other, we have the descendant ex-colonial powers, Britain, France and Italy, whose places in the G7 will be taken by the BRIC countries within the next decade.

Guess who respects international law, and guess who flouts it? And let us wonder why...