US - NATO attack on Pakistan 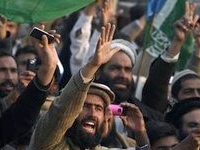 The attack was unprovoked, wanton, cowardly and ruthless. It was open aggression and violation of Pakistan's sovereignty. US - NATO aggression was condemned or Pakistan received support and sympathy from China, Russia, Iran, OIC (Saudi Arabia) - Turkey. Even UK expressed regrets; France supports an inquiry into the issue. Germany was obviously disappointed by Pakistan's cancellation of participation at Bonn Conference

US filled with hubris even refused to apologize, while Delhi was gloating over the death of Pakistani Soldiers and its predicament. The Pakistani Nation is livid with rage and united to defend Pakistan. The American sanctioned attack (no other power on the planet can dare to attack Pakistan at its own) is radicalizing Pakistan. The beleaguered (mini minority) corrupt and treacherous elite in Pakistan are finding excuses to explain American aggression.

The time has come to end the Geopolitics of Confusion!

Firstly why was this aggression launched?

A long list of answers can be compiled, some are presented here:

Secondly who is with and against Pakistan?

With Pakistan stand its brave plus patriotic Armed Forces, and the nationalistically motivated people of Pakistan. The soldiers and masses stand together against foreign threats. Externally to varying - degrees Pakistan is supported by China - Russia - Iran, Turkey, Saudi Arabia - OIC. Almost the entire region is against US sponsored wars, or longevity for its military presence. The Taliban in Afghanistan and Pakistan are already in a state of war with USA. Most of the world respects Pakistan (Pakistan's nomination to Security Council seat was testament). India is of course completely untrustworthy. It can always launch 'Cold Start' offensive on any pretext in harmony with US MILITARY STRIKE - against Pakistan. (In December a major Indian Army Exercise is underway in the deserts against Pakistan). Still the regional Geopolitics would have to be viewed by Delhi, more than Pakistan's offer of MFN.

Russian support can prove a game changer for Pakistan. It would tilt the scales, Russia - China and not only China supporting Pakistan. Deterring USA to an extent, while inhibiting India from joining US for an attack on Pakistan. (Besides Pakistan's conventional forces and nuclear deterrent - tactical weapons included, could keep India at bay)

The British even as America's most Allied Ally are not openly clashing with Pakistan. (Both due to British Policy and British vulnerability at home. More so, the fate of the British Embassy in Tehran clearly indicates an Iranian - British clash). In fact Pakistan's relations with the British, French and Germans (major NATO members) have been good. They could even be better if NATO withdraws from Afghanistan. (There would be little to have friction on). Pakistan - German friendship should improve further.  Germany is the true and future leader of Europe and respected by Pakistanis.

Now the question who is against Pakistan?

A brutally candid answer is:

Firstly, Pakistan's own corrupt, treacherous and incompetent elite, a mini minority which wants to keep robbing and exploiting the Pakistani Nation. They seek solace and work for foreign powers (USA - India). The treacherous elite would sell the Motherland for a song. They want to serve as slave overseers for a shackled Nation. Selling it to the first bidder. Yesterday it was USA alone but now it is USA - India. This is the Pakistan Corruption - Treachery Nexus, who are more loyal to Washington - Delhi than many Americans and Indians and of course Anti Pakistan. (After all in USA, Americans are challenging the system - Occupy Wall Street, LA etc or Anna Hazara 'Anti corruption Drive' in India)

Secondly the cabal of America's Globalists, military - industrial complex, left over Neo cons who still want to conquer the world. (Despite being chastened in Iraq - Afghanistan). On the contrary, the good hearted, charity giving and amiable people of America many of whom are now questioning this perpetual war quest. They seek jobs and living at home rather than wars abroad! The White House and State Department are confused in the Geopolitical labyrinth of Afghanistan.

The war lovers of course love war. They want to continue the war in Afghanistan and start new ones in Iran - Pakistan! (Not divining that the combined Geopolitical space of Afghanistan - Pakistan - Iran - Iraq will prove a Giant Black hole (even for Uncle Sam).

Thirdly, Delhi the serpent, is always bidding its time to strike Pakistan. Still the complex and multi faceted (Delhi does not want to lose Tehran / Moscow affinity) regional Geopolitics weighs heavy on Indian minds. As does the fear of nuclear holocaust from a Pakistani response.

Veteran Indian Diplomat MK Bhadrakumar had predicted a 'Persian Response' by Pakistan for this attack, (asymmetrical plus Strategic Defiance). Simon Tisdall warning in 'Pakistan has had enough' had opinioned that an Iranian type Revolution in Pakistan could be one outcome in future.

'A hot flash in the Cold War with Pakistan' is how the Atlantic titled its article. The only people who still think in terms of an alliance in the Global War on terror are Pakistan's dimwitted, thieving, treacherous elite! The rest of the world is quite clear on the real issues, which are:

From the MemoGate to Gunship attack etc, are all tactics of one supreme over arching strategy to denuke Pakistan. (War hawks controlled, Indian influenced).

Washington wants to keep its 'Strike or Nuclear Grab Option' open against Pakistan (before or after war with Iran). For this herculean task there are three pre requisites.

Without these three pre requisites any Strategic Denuclearization Scenario remains fiction and outside the realm of feasibility. (Any attempt against Pakistan's nuclear sites will have catastrophic consequences any way).

Strategic logic dictates that all three pre requisites (for denuclearization attempt) be denied to foreign forces.

Besides Pakistan's brave soldiers, the Nation stands united. China, Russia and Iran at the very least seek Pakistan's strategic autonomy from NATO. EU - NATO can be divided more so with Turkish support. British are cautious, French non hostile, Germans Peace Seeking. In America, the Afghan war has divided them, even as they unite for the war against Iran.

Pakistan should lobby for:

('Next War - Iran' written by this scribe for Opinion Maker has been published by Pravda Ru and Windows to Russia. A view in Moscow is that Pakistan and Russia can together choke NATO in Afghanistan!)

The problem in Afghanistan is very simple.

The Americans lost the war, but do not want to admit it.

There is still time for them to declare victory and go home today. Tomorrow may be a different day!

Author of the book "Gwadar on the Global Chessboard"

The author is a retired Brigadier of the Pakistan Army.