A Tribute to Kim Jong Il 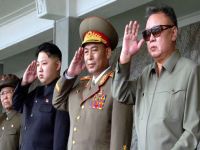 by Gabriel Martinez, Editor's Blog for Solidarity with Korean People

The death of the North Korean leader has raised a series of discussions regarding the character of the existing political system in the northern part of the Korean peninsula. For some bourgeois analysts, since the transition of the leadership took place after the death of Kim Jong Il, they would think it be proof positive that the country's political regime is a brutal dictatorship with dynastic traces.

Soon after the death of the "Leader Kim Jong Il" (one of several ways that North Koreans refer to the deceased leader) the agency KCNA issued a statement urging the North Korean people to support the new leadership headed by Kim Jong-Un, son of Kim Jong Il, who previously was vice president of the National Defense Commission.

It is important to emphasize that during the 90s, a time when the DPRK went through a period known as the "Strenuous March," the National Defense Commission became the most important political organism of the North Korean state, after the position of President.

The apparently inherited transition of the leadership in popular Korea got the most hateful, heinous attacks of the worldwide bourgeois press, which speaks of a "monarchical Communist dictatorship" in North Korea. We could agree with this line of argument if we adopted a shallow and superficial method of analysis, like most journalists, propagandists and "analysts" of the capitalist order.

What happens in Korea cannot be understood without, first of all, taking into account its historical context. The Korean revolution and socialist construction in the northern peninsula have always had to cope with all kinds of imperialist machinations.

The Korean War, which started already after the founding of the Democratic People's Republic, was a clear demonstration that the Koreans could never trust the good intentions of U.S. imperialism and its allies. Kim Il Sung was the main leader of the North Korean people in this period, being converted into a gigantic figure loved by most of the Korean people.

During the Korean War, Kim Jong Il was very young, but there are reports that affirm that his interest in political issues was already showing at the time. After liberation, he got involved in building the socialist construction of the country and, as an active militant of the Workers Party of Korea, participated in volunteer work in the fields and in construction. He also participated in intense academic debates in the Kim Il Sung University.

These meant that Kim Jong Il became an increasingly popular leader in Socialist Korea. The Selected Works of Kim Jong Il dealing with such periods, are composed of multiple volumes and cover a wide range of subjects: philosophy, politics, economy and national defense.

For them, it is still a question of continuing revolutionary construction, taking into consideration what has been done by the previous generation, without coups d'etat and defamation of the predecessor leadership, a path that could give rise to a "Korean Khrushchev."

When Kim Il Sung died, one of the promises made by Kim Jong Il would be to "not change one millimeter" of what was done by Kim Il Sung, or in other words, persist in taking the socialist road in an unfavorable situation created by the dissolution of the USSR. He carried out what was promised and beyond, managing to stabilize the country economically, surpassing the serious economic crisis that struck the country in the 90s.

Any news that speaks of an "economic crisis" and "hunger" in popular Korea today is mere capitalist propaganda, and does not even deserve to be taken into consideration. Obviously, this is not the question here to point out that everything goes well in the country, because we know that the country faces many problems such as difficulty in obtaining foreign currency, due in large part by the economic blockade of the United States and its allies, which has proportions more devastating than the blockade of Cuba, for example.

Faced with such an adverse situation created by the imperialist siege and encirclement, which country every day threatens the the way founded by the Workers Party of Korea, that ensures the support and unity of the people around its proposals?

To strengthen the role of the leadership, the new leader Kim Jong-Un is almost a "scientific creation" of a political leader, even if he does not have the same ideological and practical accumulation of his predecessors. He will dispose of the help of numerous pictures of the Workers Party of Korea to successfully exercise his functions. 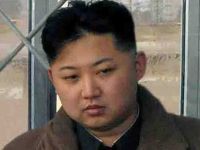 However, the principles are not left out, and therein lies the fundamental difference between DPR Korea and the bourgeois countries that slander it: The people in Korea are the popular masses and the "center of everything" (as they like to say).

What does this mean? It means that the position occupied by the masses as a whole (working class, peasants, intellectuals) is radically different from the position occupied by the masses in capitalist countries. This is not mere propaganda. In DPR Korea, the people are involved and build their political life on a daily basis, in schools, factories, collective farms and universities. For everything there are debates and discussions.

For the ideologues of the capitalist order, democracy is synonymous with subservience to capital and the facade of elections, where the established order is never questioned. How many dollars does a U.S. citizen needs to be elected President? How many real does a Brazilian politician need to raise to become a Federal Deputy? What is politics for most people living in capitalist countries?

These are questions that serve to reflect the true character of the society in which we live. Some may ask: "But here I can say whatever I want, I will not be arrested." Yes, perhaps you may not actually be arrested, but also your ideas are never put into practice, and if you're not imprisoned, it's just because a situation was created where your ideas can hardly be put into practice, only with the greatest difficulty.

If things were reversed, I have no doubt that the ruling classes will resort to violence and the justice system to preserve their fundamental interests. Fortunately, the North Koreans do not need and do not want this type of democracy.