Standing up for our eroding civil liberties

Note: This piece was submitted to numerous mainstream news outlets in America, all of which refused to publish it. 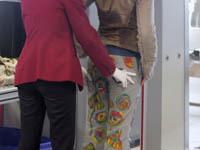 This country's Founding Fathers were a bunch of obnoxious jerks -- and I mean that in the most reverent way. These were men who were fiercely opposed to blind obedience to authority, and who laid their lives on the line to flip it the bird. Oh, how disappointingly -- and dangerously -- far we've fallen. Our Constitutional rights are increasingly being eroded -- at TSA checkpoints, at police stops where citizens are arrested for videotaping, and elsewhere -- and so many Americans are just sitting there blinking like livestock.

At the airport this past March, I wasn't one of those people, and that sometimes comes with a price. In my case, $500,000. That's what a TSA agent's lawyer is demanding from me for "defaming" her client by saying she sexually violated me during the pat-down, and then for "libeling" her when I blogged about it. Marc J. Randazza, the First Amendment lawyer defending me, called her case "meritless," but this woman's notion that I should fund her existence for the rest of her life because I stood up for my Constitutional rights is beyond disgusting.

On March 31, 2011, I was flying out of LAX to attend a psychology conference in New York. When I reached the TSA checkpoint in the United terminal, I found that I had no choice but to get the pat-down. Tears welled up in my eyes -- for how we've allowed the Constitution to be ripped up at the airport door and because I was powerless to stop a total stranger from running her hands over the most private parts of my body as a condition of normal, ordinary business travel.

I can hold back the tears...hang tough...but as I was made to "assume the position" on a rubber mat like a common criminal, I thought fast. I decided that these TSA "officers" earning a living violating our Fourth Amendment rights, and searching us without probable cause, do not deserve my quiet compliance. I let the tears come. In fact, I sobbed my guts out as the agent groped me. And then it happened: She stuck the side of her latex-gloved hand into my vulva. Four times. Twice from the front and twice from the back, with the only barrier being the fabric of my pants. I was shocked -- utterly unprepared for how she got the side of her hand up there. It was government-administered sexual assault -- an action that, in the workplace, would be considered sexual harassment, and elsewhere would be considered a serious crime.

Powerless to stop her, but not to vigorously protest what she did to me, as I left the checkpoint, I yelled, "YOU RAPED ME." I later blogged about it, naming her name, and urging others to post the names of TSA agents who search them (even when done according to TSA procedure), explaining, "It's got to become very uncomfortable to be one of those who earns a living by 'just following orders.'"

Some believe I'm wrong to suggest such things -- particularly those who believe the TSA is keeping us safer. Unfortunately, it is not. Security expert Bruce Schneier calls the TSA's efforts "security theater," noting all the dangerous items they miss, and observing that during the agency's multi-billion-dollar history, they have yet to thwart a single attempted terrorist attack.

If the TSA's actual mission were its stated one -- protecting the Nation's transportation's systems... -- checkpoints wouldn't be staffed by low-wage, unskilled workers, they wouldn't be searching everyone, and they certainly wouldn't be waiting until terrorists get to the airport to try to root them out. Meaningful measures to thwart terrorist acts require highly trained law enforcement officers using targeted intelligence to identify suspects long before they launch their plot.

The TSA's main accomplishment seems to be obedience training for the American public -- priming us to be docile (and even polite) when ordered to give up our civil liberties. Not only does the TSA violate our Fourth Amendment rights, they've posted signs that effectively eradicate our First Amendment right to speak out about it. One such sign, in Denver International Airport, offers the vague warning that "verbal abuse" of agents will "not be tolerated." Travelers are left to wonder whether it's "verbal abuse" to inform the TSA agent with his latex-gloved hands on their testicles that this isn't making us safer, or are they only in trouble if they pepper their statement with obscenities? Not surprisingly, few seem willing to speak out and risk arrest.

I believe I've found a less risky and more impactful way to protest, and it's through sobbing. I'm calling on American women to do as I did at the TSA checkpoint: Opt for the pat-down and sob their guts out.

Think about it. What better way to draw attention to the inappropriateness of government-sanctioned groping than hearing mothers, wives and daughters react viscerally to having their private parts touched by strangers -- in each and every airport across America each and every day.

As the 18th century economist Adam Smith noted, sympathy for others is a powerful human motivator. Because a bureaucracy's first duty is protecting itself, perhaps our only chance of revoking the pointless daily rights grab that is the TSA is to evoke wide-scale sympathy. Helpfully, there's plausible deniability for a sobbing woman. We can suspect she's manufacturing her tears, but we can't prove it.

Some find it an absurd contradiction that I write books on bringing back manners, and yet I'm encouraging people to sob at these checkpoints. The truth is, good manners don't always involve going quietly. Sometimes, like when our civil liberties are violated, the most civil thing a person can do is be as loud and uncivil as possible. Still, I'm a realist. I know that most people will not follow my lead. But, maybe, every day, at every TSA checkpoint, a few will bust out in tears. And maybe, just maybe, through the spectacle of this, we can claw back some of the rights we've so docilely given up.

The notion that we can ever have complete physical safety is a ludicrous one. We cannot insure that -- not even by throwing away all of our civil liberties. What's alarming is how people are mewling about protecting our physical selves without considering how dangerous it is to give up our rights and stand there cow-eyed waiting to be told what to do next. Every time we go all "We The Sheeple...", every time we allow one more Constitutional right to be taken from us, it makes it that much easier to take the next and the next...until we wake up one day wondering how we ended up living in a police state. I think it's far better that we do our sobbing now than then.