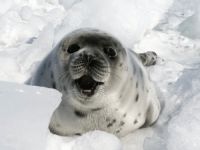 The news was broken today by IFAW (International Fund for Animal Welfare) whose President Fred O'Regan welcomes the news stating that there is a wonderful holiday gift for the harp seals: Russia has banned the import and export of harp seal skins and adding: "This is a huge victory as the Canadian Government estimates that Russia receives 90% of Canada's exports of seal skins".

The aim is to see an end to Canada's barbaric seal hunt, in which baby seals are clubbed to death for their pelts, skinned alive and thrown to the snow in what must be one of the most cold-blooded expressions of cruelty and callousness this planet has witnessed. And it goes ahead year after year after year.

Now with the Russian ban, there will be far less scope for the export and commercialisation of these skins, applying more pressure upon Canada to find some other way to entertain its menfolk and to do business.

Sheryl Fink, IFAW's Seal Programme Director (*), writes in her report that the banning of harp seal products by the Customs Union of Belarus, Kazakhstan, and the Russian Federation is "the biggest victory in the campaign to end commercial sealing since the European Union (EU) banned non-Inuit seal products".

In 2009, Vladimir Putin criticised this "bloodthirsty industry" and Russia ended its annual seal hunt in the White Sea, the culmination of tireless work by animal rights activists who sent a petition with 400,000 signatures to the Kremlin and demonstrations by Russian animal rights activists. The Russian government listened, and took action. Vladimir Putin said this practice "should have been stopped years ago" and the Minister of Natural Resources, Yuri Trutnev, declared that "The bloody seal slaughter, the killing of the defenceless animals, which can't be even called a 'hunt,' is now prohibited in Russia as it is in most developed countries. It is a serious step towards the conservation of biodiversity in Russia."

Russia did it. Now all eyes are on Canada, whose macho men get off on slaughtering defenceless animals in the most shocking acts of barbaric cruelty. 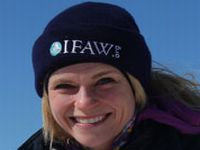 2006 Mexico bans the import and export of marine mammals, including seals.

2007 IFAW campaigns result in Belgium and the Netherlands adopting national bans on the import of seal products.

2009 Russia bans the killing of harp seal pups under 12 months of age.

2009 European Union bans the import of all seal products, with an exemption for Inuit-derived skins.

2010 IFAW continues its fight to protect the EU ban, and continues to expose the cruelty of commercial hunts to governments around the world.

2011 Belarus, Kazakhstan, and the Russian Federation ban the import and export fur skins of harp seals and their whitecoat pups