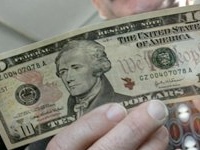 The U.S. owes more money to the FED than to China! The Federal Reserve is owned by private families. They literally rule world politics.

John F. Kennedy signed an Executive order 00001 in May of 1963 to bypass the Federal Reserve so that the United States can print its own money directly and wouldn't have to pay any interest. Look what happened to Kennedy. He got shot just six months after!

The Federal Reserve is an enemy of the United States. They love it when the U.S. goes to wars because then the U.S. government borrows more money from the FED and owes more interest!

The U.S. government doesn't print its own money!! Incredible!

How many people know this? Very few.

We need a revolution in America!!

The private bankers who own the Federal Reserve are evil and wicked!

Their judgment day before God Almighty is more certain and sure than all their ill-gotten money!

Abraham Lincoln also tried to get the U.S. government to print its own money directly instead of going through a privately owned national bank and look what happened to him! Lincoln got assassinated.

The Federal Reserve is a conglomeration of private banks owned by families in various nations, mostly United States and the United Kingdom.

The shares or stocks to the Federal Reserve are closed to the public. Only these families can own them!

The author, Babu G. Ranganathan, has his bachelor's degree with concentrations in theology and biology and has been recognized for his writings on religion and science in the 24th edition of Marquis "Who's Who In The East." The author's articles may be accessed at www.religionscience.com