Hillary "War Zone" Clinton: A Burger short of the Barbie 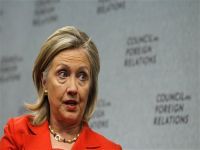 The Russian Federation does not need lessons on how to conduct its elections, much less does it need lessons from the United States of America and far less still from a female who waltzes off an aircraft to the sound of a band and claims she was entering a war zone. Suppose Hillary "War Zone" Clinton stuck her nose into her own affairs?

As predicted in this column a week ago before the Russian Parliamentary elections, the ruling party, Edinaya Rossiya, or United Russia, won the election by far, being the most voted party, having won the most seats and being far, far ahead of the second most popular party, the Communists. Let the figures speak for themselves.

Now what does Hillary Clinton have to say about that? Jumping on the bandwagon as she did in her "war zone" welcome by a brass band in Bosnia, she calls for a "full investigation" after making an even more absurd claim that Vladimir Putin has suffered a "setback" while expressing her "serious concerns". If getting 50% of the vote is a "setback" then Hillary "War Zone" Clinton is a burger short of the Barbie.

So suppose Hillary Clinton took her "serious concerns" and addressed the ills inside her own country and the tremendous damage it is doing across the globe? Speaking of electoral fraud, the first election of Bush springs to mind, after which there was the illegal war in Iraq, the fiasco in Georgia when that tie-chewing freak and his wonderful military advisors ran screaming with their tails between their legs (sterling job those Military Advisors did, Hillary. Why don't you send some more, eh what?), the illegal war in Libya, interference in Syria...we have the government of the United States of America promising to close down the concentration and torture camp at Guantanamo and four years on it is still there, we have the USA synonymous with torture, setting dogs on illegally detained persons, urinating in food, sleep deprival and sodomy by guards on prisoners... so as Secretary of State, should Hillary Clinton not be addressing this legacy instead of sticking her nose in where it is not called for?

And suppose Hillary Clinton minded her own business, and set her own house in order, for Russia does not need lessons in how to conduct its internal policies, especially not from a female such as this. In an election there are winners and losers and for me, getting 50% of the vote is a clear win, the more so when the second placed party gets under 20%. Or what is wrong with Hillary Clinton, would she prefer that the Communist Party had won? Or is she a burger short of the Barbie?

As for those who are trying to insinuate that the paltry turn-out of "protesters" in Moscow and St. Petersburg are the beginning of an "Arab Spring", the answer is that this is not an Arab Spring, but a Russian Winter, when people drink vodka to keep warm and when a certain type of citizen will do anything if an agent provocateur pays him/her to turn out at a protest, specially in the run-up to the festive season. And for those looking for trouble, the right to hold a demonstration is a very clear part of the Russian Constitution. Did anyone see the police in Russia behaving like the American police did on Wall Street when they clashed with the Occupy protesters?

No, I thought not. Then Hillary "War Zone" Clinton, you are as effective a Secretary of State as your predecessor, Condoleezza Rice, as she snarled around the world dropping snide comments and today sits cringing as she scuttles from lecture to lecture being heckled for being a war criminal. She at least could play the piano. And you? How about taking your intrusiveness, arrogance and insolence back to Chicago or Arkansas where they belong?