Nuclear war on the horizon 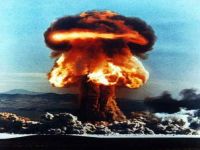 It might be the lazy way, to just sit and accept the utter bilge and lies coming from the mainstream western media when they report on events in Syria and Iran. But is it worth it? Would those who accept these lies still think it's worth it, not to look for the truth, if they realize that we are heading straight for a third world war?

There comes a point in time, a point from which there is no return. Someone is going to get fed up and take that step, ignite that spark, that will lead to the beginning of another world war. This world is as close to world war as it was during the Cuban Missle Crisis.

Thirteen days in October 1962, the world looked on as Nikita Khrushchev and John Kennedy both, thankfully, tried to avoid a collision course that would set off a nuclear war between the two superpowers.

While conducting a spying mission on the Island of Cuba, the U2 aircraft discovered that missiles had been installed on the island to prevent the threat of any future invasion.

Kennedy decided to impose a naval blockade, or a ring of ships, around Cuba. The aim of this "quarantine," as he called it, was to prevent the Soviet Union from bringing in more military supplies. He demanded the removal of the missiles already there and the destruction of the sites.

On October 22, President Kennedy spoke to his countrymen about the crisis in a televised address. Eye to eye, furious communications later, finally an agreement was made and both sides were able to stand down.

The missiles in Cuba would be removed, as would those in Turkey, and a promise to leave Cuba alone...demanded by Khrushchev. Later, movement towards peace and cooperation included the establishment of a teletype "Hotline" between the Kremlin and the White House and the signing of the Limited Nuclear Test Ban Treaty on July 25, 1963.

Iran's military said on Sunday it had shot down a U.S. reconnaissance drone aircraft in eastern Iran, a military source told state television. What was this drone doing over Iranian territory?

A potential conflagration between the two superpowers is reaching frightening levels in the Mediterranean with vessels of both the US and Russia maneuvering into confrontational positions.

The United States and its European allies have run roughshod over international law, rendering it null and void. The bloody aggression and genocidal campaign against Libya were just a beginning of the end.

The Yugoslavia campaign of lies and false accusations was repeated once again, while rubber stamp robots incorporated, known as the UN, gave the coalition of barbaric savages their cover of legitimacy with UN Resolutions 1970 and 1973, which were also repeatedly run over, violated and trashed as they crept toward total war and invasion rather than the established no-fly zone and no boots on the ground.

Infamous were the lies about weapons of mass destruction in Iraq and no less ridiculous were the claims that the Gaddafi government was "killing its own people." Now they say the same about Syria and accuse Iran of trying to use nuclear energy to make nuclear weapons.

In a court of law, if the judge catches you lying even once, he will totally disregard your case because you were caught in a lie. All it takes is just one lie. You have destroyed your credibility totally and forever in his eyes.

If I find out you've lied to me once, from that time forward you will have to prove you're not lying again when you make claims, otherwise I have no reason to not think you are not just lying again.

So, too, any thinking person cannot take what the U.S. and Europeans say or claim as remotely even credible, along with their Israeli friends. In all cases, they have to prove they are not lying because all they ever do is lie.

It's more a case of these entities projecting their own evil intentions onto their marked, targeted victims.

So people out there, don't accept what they say at face value, not from PROVEN LIARS.

Iran, one of their next targets of choice, does not constitute a threat to global security, or a threat to the security of Israel. Iran hasn't done anything aggressive in over 250 years...and they have repeatedly allowed inspections beyond the call of reason and assured others that they have no intention of making nuclear weapons.

In Syria, so many lies already coming fast and furiously...inventing incidents that never happened. The people at the locations where several incidents were alleged to occur say no such thing ever happened.

Why is the west, as in the case of Libya, sending terrorists and weapons into Syria? Why are snipers shooting at unarmed civilians and at police/military?

Who gives them the right? Let the people decide, and not a gang of terrorists and garbage faced airplanes dropping bombs on innocent civilians. Leave people alone.

The world community is getting fed up with this. China and Russia cannot be hoodwinked now into approving sanctions or approving military action.

The forces of demonic evil now have come nose to nose with the forces of reason. Ships from the U.S. and ships from Russia are now on the coast of Syria. Anything could happen.

These two counties, China and Russia, also know they are on the list of targets.

You cannot on one hand have a fully armed, nuclear weapons possessing Israel and then tell Iran they cannot even use nuclear energy for peace...their right as signatories of the NPT, a treaty that Israel refuses to sign while also refusing any inspections.

Any one of a number of confrontations is going to start the next world war. These powerbroker elitists think they can escape the effects of a nuclear exchange...just shows how insane they are. They must be stopped and this warning must be taken seriously.

Author`s name Lisa Karpova
*
Topics syria
18:54
Ukrainian soldier uses chainsaw and fire to release US howitzer from ice trap
18:30
Onet: Ukraine will lose in six months due to shell shortage
17:36
Russian troops defeat Ukrainian troops in Zaporizhzhia region
14:50
Number of foreign mercenaries in Ukraine continues growing
14:17
Russians buy more than 50 tons of gold in 2022
13:57
Russia will not talk to Ukraine. Russia will talk to the West
13:34
USA's plan to give 20 percent of Ukraine for peace hoax
12:51
Medvedev: Ukraine as a state to be devastated, go bankrupt and be turned into colony
19:57
Russia will use all of its military potential to counter Western arms supplies to Kyiv
18:34
Biden changing strategy on Ukraine to reach diplomatic solution with Russia
The West prepares army to invade Russia