Condoleezza Rice: A Clown in the Theater of the Absurd 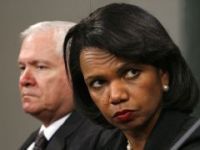 Condoleezza Rice is unique. So unique that it appears she is the first person to have made the transition from the pages of literature to real life, so absurd that the notion arises she is a character invented by Ionescu, the master of the Theater of the Absurd, a clown on the world stage, whose arrogance is overshadowed by her incompetence.

Condoleezza Rice has one problem: she never understood the precepts of Peter's Principle, in which a person surpasses the boundaries of his/her own competence and does not understand the point at which they should stop so as not to reach stations beyond the limitations of their own capacities. In the case of Condoleezza Rice, a University library in Boston would appear to be the perfect setting for her to flourish virtually unnoticed, saying little and studying a lot, and in the evenings playing the piano.

Some people should be seen and not heard. Condoleezza Rice has a pleasant demeanor, stands up nice and straight and looks lady-like, does her hair up nicely and has an attractive smile. The trouble is, once she opens her mouth, the smile turns to a snarl, something lunges behind those eyes and centuries of hatred and anger and pent-up oppression come vomiting forth, presenting the bile and venom of one who has not learned to control her emotions and the result is that politics and policy get mixed up in a difficult menopause which in her case started early and stubbornly refuses to pass.

I outed Condoleezza Rice in this column a decade or so ago when I found her out for having made derogatory remarks about Russia in a European publication, an allegation denied by her office yet crystal clear for all to see in the publication itself, whose online resource vaporised within hours. Trouble is, as I said at the time, I had the printed copy in my hand and yes, I can read French. Touchez, hoin hoin.

And now here she is again mouthing off about Vladimir Putin and democracy and Russia and riots and repression and so on. Just a second here, now who the Hell is Condoleezza Rice to opine about anything? Let us examine her record...a "Soviet expert" whose control of the Russian language is at best iffy, whose capacity to comprehend events on the world stage is centred on one square metre around her feet, whose backyard comments belong to a stuffy bookroom teaming with earwigs and bookworm and the stench of unwashed and unkempt University students.

Condoleezza Rice, who as National Security Advisor watched impotently as the infamous 9/11 incidents unfolded - if she was Security Advisor, just imagine if she had been an enemy of the USA. But that is precisely what she has turned into, for during her spell as Secretary of State, the reputation of the USA reached a historic low, diplomacy was replaced with skullduggery, dialogue with bullying as missile democracy was launched in a throwback to the Bible and Bullet approach to international relations. Under Condoleezza Rice's able mismanagement, US Foreign Policy became synonymous with torture, with gross disrespect for human rights, with murder.

Under Condoleezza Rice, US Foreign Policy, nay, the very image of the United States of America and all things American was one and the same with urinating in food, sleep deprival, force-feeding with foods alien and insulting to culture and religion, the cowardly mistreatment and abuse of innocent and defenceless prisoners.

It therefore follows that she ended her term in office beaten, defeated and humiliated as she stood beside that tie-chewing freak Saakashvili, the US stooge who launched a murderous escapade against Russian citizens and who as a result saw the Republics of Abkhazia and South Ossetia taking their rightful place among the community of nations (as was their right under the Soviet Constitution which Georgia disrespected and which Soviet expert Rice ignored).

Due to her total incompetence, it comes as no surprise that Condoleezza Rice today spends her time trying to make a few dimes out of speeches, scuttling from auditorium to auditorium, cringing in humiliation, muttering "Go to Hell!" as furious members of the audience accuse her of war crimes and heckle her for denigrating the good name and image of the United States of America, the country she managed to insult to its fibre and whose name in the hearts and minds of the vast majority of the world's citizens has been relegated to the gutter for decades to come.

If Condoleezza Rice knew anything about Russia, she would know that every time she opens her mouth on this subject, she lies through her teeth. So often has she done so, that many would claim she is an evil, foul-mouthed and inconsequential guttersnipe of the worst possible caliber, a disgusting and revolting and repugnant defender of war crimes, disrespect for international law and insult of the norms of diplomacy and very arguably, the worst Secretary of State in the entire history of the United States of America.

The cherry on the cake will be the results of Vladimir Putin's re-election in a free and fair open and transparent democratic process, which I shall personally send to her office in 2012. And why will Vladimir Putin be re-elected? Because the vast majority of Russians like him...because he is the right man in the right place at the right time, he is a patriot and he stands for respect for the law and not insulting it, the rule of law and not the jungle and international relations based upon respect, dialogue and debate and discussion, the fundamentals of democracy...

Needless to say, Condoleezza Rice stands against each and every noble precept that Vladimir Putin represents. I am free to place this article in Pravda.Ru Opinion section, unlike the cowed journalists working for the main publications in the USA whose work is interfered with, edited out and censored. So what was that about repression?

Condoleezza Rice: a useless National Security Advisor, a worse Secretary of State and just about the only after-dinner speaker who runs cringing under hails of abuse for being a war criminal. Ionescu could have copied and pasted her right back into one of his books in the genre of the Theatre of the Absurd. As for her own book, I have seen more intelligent things scrawled in excrement on the walls of public latrines and bathrooms, the room where it will be consigned in my house, beside the toilet, should anyone offer me this pile of excrement for Christmas. On second thoughts no, I have more respect for my anatomy.