The Crisis: To Hell with the people! 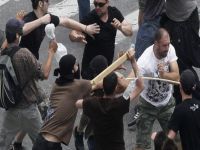 To Hell with the people! We all have to pull together and do out part! We all have to make sacrifices! These are the soundbites we receive from our politicians these days but just one minute. I fulfilled all my duties as a citizen. Did they? Then why the Hell do I have to pay for it?

The sheer injustice of expecting the man in the street to pick up the tab for the mistakes of those who have ruined our economies through corporate greed, stupidity and incompetence shows quite how undemocratic our world has become. The European Union is an excellent example of this - who asked its 500 million inhabitants whether or not they wanted the Euro imposed on them or whether they agreed with the terms of Treaties which saw a Federal State being implanted in a top-down approach, sweeping aside customs and lores and laws and economic vectors which had taken thousands of years to form?

It appears to be a question of simple common sense, though one which seems to have eluded the enlightened scholars and academics who have been mismanaging our economies in recent years, that if you meddle with the fundamentals of a country's economy, fundamentals which are based upon hundreds if not thousands of years of history, and finance sectors not to produce, pay farmers to bury their produce instead of selling it, then obviously imbalances are going to be created. Downstream, these will have drastic effects upon the availability of jobs for future generations. It doesn't take a rocket scientist to work that out.

And that is precisely what has happened. To make matters worse, irresponsibility among those who managed the financial and banking institutions in the USA sent a fireball hurling eastwards and in a world in which the globalised economy has become a reality, the shockwaves hit every corner of Europe. Hard.

However easy it is to point the finger at the Americans and blame them for everything, the ball does not stop only at their feet. How is it possible that the Europeans themselves allowed their models to become casino economies, in which  healthcare trusts and pension funds were invested in iffy banks with suspiciously high interest rates, without anyone properly regulating what was happening. With our money?

It is as if the entire political class and the financial and economic managers who cohabit the same clubs collectively fell victim to the famous "Martian" Fortune Letter. "My name is Takeyoufor Aride. I used to work in the oil ministry and I have 456 billion dollars in a bank account. Due to the laws of my country, I can only touch it if I open an account overseas. If you open an account and deposit 5,000 USD in it and give me the keys..." so far so good... "you will receive one third of the amount, namely 152 billion dollars". What he does not say of course is "As soon as I have the account number and authorisation, your 5,000 dollars will vaporise before your eyes and you will never hear from me again". But they fell for it and the analogy is not too far away from the truth.

To compound the matter, the accounting practices of several EU states have been dubious to say the least and now, every page that is turned reveals a whopping financial black hole. Couple that with the fact that investments were made in such volatile items as the future price of copper, insurance policies were taken out for these and these policies were reinsured, every second of every day these worthless pieces of paper are falling to Earth, with a venomous tail attached - they may be worthless but they are not meaningless. Put simply, billions upon billions of dollars of our money vanished.

And now they have the audacity to reduce our pensions, reduce our salaries, increase our working hours, take away our subsidies and attack the rights we have striven for, for decades? Did we, the people, not fulfil every law of the unwritten contract which is called citizenship? Did we not study and work and pay our taxes? Did we not provide money to the State through VAT with everything we bought? And if we missed the payment of our quarterly VAT bill, the system fell on top of us, if we failed in a tiny detail, the book was thrown at us. So if we have done our part of the deal why the Hell should we pay for the mismanagement of others, in many cases, people who continue to receive millionaire bonuses and pensions, to add to
the millions they made through their "incompetence"?

I have another plan.

Suppose we identify all of those who have been in positions of political or budgetary or financial responsibility over the last four decades and trace where their wealth came from (or that of their descendants), suppose we held them accountable and responsible for what they have left in their wake and after a proper investigation, suppose their assets were confiscated to pay for cleaning up the mess they themselves made?

After all, why the Hell should we, the people, pay for it? It is as if we all worked hard as farm hands, did what was asked of us and trusted the farmer to invest in our pension funds. One day he comes to us and says "Sorry, I cannot pay your salaries, you will have to work three hours longer every day and receive one third less, because my older son ran up this debt selling drugs to an Albanian gangster. Sorry, you won't be receiving pensions either because my younger son took the pensions fund and blew it all on a prostitute". At which the older son rolls home in the latest top-of-the-range Bentley and the younger one appears at the window swigging from a bottle of Moet Chandon champagne while behind him an uproar can be heard as an orgy gets into full swing.

I think we just caught a glimpse of something nasty lunging behind the farm hands' eyes.