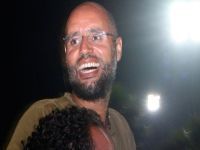 Has anyone noticed the virtual silence on Libya among western news agencies? If Libya was today quiet, and without any conflict, we could believe the Lies on Sky and friends incorporated that a dictator had been toppled and his enraptured people freed, living now in peace, preparing for democracy. But this is not the case...

What I am about to say comes as no surprise at all for those of us who know Libya, know Colonel Gaddafi and who warned NATO about the monumental mistake being made before the invasion began, as indeed was the case before Iraq in this column back in 2003. NATO, however, in its greed, just does not learn.

As the IAEA invents lies about Iran, and includes in its team elements who are wholly unqualified for the task to monitor the Islamic Republic's nuclear programme (*), we see the same old story being repeated. It begins with the lies about a bloodthirsty dictator or a dangerous regime posing a threat to the USA or its allies, the UNO is bullied into naming NATO as the world policeman, skulduggery and blackmail then replace diplomacy, after which NATO bombs the crap out of a country, murdering men, women and children alike, using DU, using cluster munitions, and breaching every rule in the book. Then in swing the kangaroo courts to clear up the mess and lo and behold, a country's sovereign funds have been literally stolen, its infra-structures destroyed with NATO military hardware, rebuilding contracts are handed out to bolster the economies of the invading forces and a nice puppet regime is installed.

However, in the case of Libya, the story is far from over.

For a start the terrorist forces NATO launched, the RATS, are continuing their horrendous human rights abuses, torching buildings, raping women and girls, destroying public and private property, murdering, torturing, stealing and looting and sowing chaos among the beleaguered citizens who were perfectly happy with the Jamahiriya (government through people's councils, the country's assets deposited in the citizens' bank accounts). Witness of this is the 70 per cent approval rating from unofficial polls in favour of the Jamahiriya, were Saif al-Islam al-Qathafi to stand in the next election. What do Obama, Cameron and Sarkozy have to say to that? Nothing.

Would NATO allow the Libyans to include the Jamahiriya in a future election? No, because in a NATO-ruled Libya, no Government which protected the interests of the country would be allowed to participate, only a political force constituted by traitors willing to hand the resources over to foreigners. NATO's democratic deficit was shown most clearly by the refusal to allow the Jamahiriya to hold an election for people to choose between the old system and the RATS - bands of terrorists who sow havoc wherever they go. What do Obama, Cameron and Sarkozy have to say to that? Nothing.

Graffiti has now appeared in Benghazi telling Negroes to leave or be executed - proof once more, as if any were needed, that the RATS are racists and murderers. These are precisely the "people" who Obama, Cameron and Sarkozy supported. In plain English, Barack Obama, David Cameron and Nicolas Sarkozy supported terrorists, murderers and racists. The RATS call it "slave cleansing". The Misrata Brigade already committed ethnic cleansing in Tawergha, murdering all people with black skin. What do Obama, Cameron and Sarkozy have to say to that? Nothing.

The fight is not over, that is why NATO is still there

Exactly, yet again breaching international law, with its remit expired, NATO continues present in Libya with troops on the ground and with bombing raids. The bill for the British public must be somewhere in the region of two billion pounds by now. Wonderful, isn't it? Where is your hospital, your school, your medical centre, your supplementary benefit? It is in Libya. "Sorry Mr. Johnson, the NHS simply does not have the financing for your son's leukaemia treatment, I am afraid he will just have to die. You see, the money we waste on his treatment has to be invested in murdering Down's Syndrome children in Libya, to make us popular and so that the UK can get the rebuilding contracts". What do Obama, Cameron and Sarkozy have to say to that? Nothing.

NATO and its mercenaries' aircraft are operating from Sudan and Chad, while there are reports of direct flights from Tel Aviv. Tuareg camps have been strafed, military centers in the south have been attacked, more civilians have been massacred. These crimes will be added to the indictment drawn up and delivered to the ICC and the ECHR (**). Sources inside Libya linked to the Green Resistance have indicated that in the last two weeks, these NATO forces have lost 37 aircraft - 8 Israeli fighter planes, 13 Qatar Apaches, 11 French Mirage, 5 French Rafael fighters, shot down trying to evade and invade the Libyan Southern Airspace, with all their pilots and crew killed and enter into green Libyan Jamahiriyah territory.

The Libyan Liberation Front (LLF) is composed of elements of the Libyan Armed Forces loyal to the legitimate anti-terrorist Government of Libya (the Jamahiriya), the armed tribal forces and the volunteers who have taken up arms to protect their villages, towns and cities against the terrorists unleashed by NATO. Despite 9,000 murderous terrorist bombing raids by NATO's missile diplomacy approach, these heroic forces have stood firm and have inflicted massive casualties on the terrorists, racists, murderers, looters, torturers, sexists, arsonists, rapists and thieves that NATO calls the "rebels".

The Green Resistance recently liquidated the terrorist leader in Zlitan, Al-Berss Abuajaila; fighting was ongoing in Tripoli on Friday after prayers, in Green Square and Bab Al-Aziziya; Southern Misrata patriots are fighting against the terrorist traitors, North Misrata Brigades; LLF is active in Thawergah; LLF active in Tobruk, Zlitan, Gharyan and Sabha. Indeed, the LLF is active in all regions of Libya. The RATS know very well that without NATO's skirts to hide behind, they would not win a single battle. A traitor is basically a coward, the RATS are both.

Another NATO disaster. This time, supporting terrorists and racists, murderers and rapists. How low can NATO get? This time it will have consequences. NATO's reputation, along with thousands upon thousands of RATS, are buried beneath the sands of Libya, in tatters, while from the desert emerges a pride of lions, chasing the RATS back to the sewers of Qatar, Misratah and Benghazi, from which they emerged.