Angie and Sarko: The Dynamic Duo 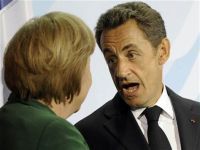 The Greek Prime Minister is about to be called to the office of the School Director and the Sub-Director. Director Angie looks stern while Sub-Director Sarko tries to gain some gravitas, attempting to look serious by standing still. Outside, coughing nervously, George Papandreou waits to be received. Will he be caned?

Will he have a Saturday morning detention? Will he have to write 100 times "I must not ask my people what they think"?

The stance of Director Angie and Sub-Director Sarko, shocked at the Greek Prime Minister's plans for a referendum, asking the Greek people to back his policies, or not, is typical of that displayed by the European Union, an institution forged from France's terror of Germany and Germany's hegemonic plans for the continent, in which in fifty years it achieved everything beyond the wildest fantasies which fuelled the last world war: Deutschland über Alles!

Yes, ladies and gentlemen, modern Germany has managed what Hitler failed to do: dominate Europe and it has done so with an ever-present and very willing collaborationist France, nodding obediently as Germany barked orders at her, creeping and crawling and slithering around Germany's legs and licking Germany's boots. Welcome to the European Union's dynamic duo: Catwoman and Robin.

Lo and behold, after decades of paying Europe's southern nations not to produce anything, destroying their fisheries and their industries and their agriculture in exchange for handfuls of cash, destroying the jobs for future generations, we have a two-speed and two-tier Europe, a sort of Mensch and Untermensch Europe of haves and have-nots.

Was anyone consulted? Were the citizens of Europe asked about what was happening, namely the federalisation of a continent whose societies and countries and cultures took thousands of years to form, whose economies took hundreds of years to develop? No, they were not. When anyone dared to hold a referendum it was very carefully stage-managed until the Eurocrats got what they wanted - a federation creating jobs for the boys and a myriad of highly-paid Eurocratic jobs.

Did anyone ask us whether we wanted the Single Market or Single Currency thrust upon us? Did anyone consider that if, in the case of Portugal for example, its economy was the result of years upon years of natural development, then by paying the Portuguese not to produce anything, enormous imbalances would appear?

In Greece, these imbalances are translated into an unemployment rate of over 17 per cent and a Stock Market plunge of 90% in just three and a half years. Now what is that doing to pension funds? So what has Greece, or Portugal, or anyone else for that matter, to gain any more from Germany and France's Machiavellian plans?

They paid these countries not to produce, they forced them to destroy hundreds of thousands of kilos of crops, they filled the coffers of government officials paying them to counter natural forces, burying fruit instead of harvesting it, meaning there are now no jobs and the people themselves were never consulted.

So George Papandreou, good on you. Why should the people of Greece, or anywhere else, for that matter, agree to an idiotic European Union that they never asked for, upon which they were never consulted, why should they agree to austerity measures which are thrust upon them because a handful of demented idiots decided to create a pie-in-the-sky ideal out of nothing, after the economic tissue of their countries was torn apart in two decades? To Hell with the single currency, it was a stupid idea from the beginning.

The people of Europe did not ask for this European Union. They wanted a general trading agreement, nothing more and nothing less. The people of Europe have been hijacked by a bunch of dreamers, incompetents, criminals, bad managers, political protagonists and failures. They created this mess, let them pay for it. The States of Europe are responsible, why should the private sector have to pick up the tab?

Let those who squandered billions and who spent decades mismanaging funds have their accounts raided, their properties confiscated and their funds turned over to cover up the holes they are responsible for.

So George Papandreou, when you are called into that office, tell them where to go...