Crisis? What crisis? You ain't seen nothin' yet! 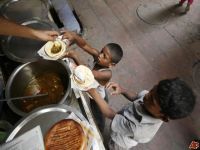 To what extent will the global economy nosedive, what will the consequences be and who or what is to blame? The other question and the more telling one, is who will pay for it - those responsible or the victims, who due to the utter incompetence and greed of those who claimed their system was better, are once again left to pick up the pieces.

Well what a wonderful system it was supposed to be, this market economy, free market liberal capitalist...claptrap. Why, it was a system where people were free to become millionaires, free to start up a business and free to employ people to contribute to the economy, creating jobs, paying taxes and creating wealth. It would provide for the citizens far better than the controlled economies which, however disastrous they were made out to be, managed to deliver free maternity care, growing infant survival rates, excellent and free education systems, blossoming literacy rates, free higher education, access to the work market, free leisure and sports facilities, a guaranteed job, a guaranteed house for free, apart from free or heavily subsidised public utilities, in many cases a subsidised car, subsidised fuel, security of the State, security on the streets, safety at work, a guaranteed and indexed pension and at the end, a funeral with costs supported by the State.

And what, pray, did the capitalist-monetarist-liberal system produce? A growing and gradual crisis holding its citizens down, making sure they do not open businesses or else putting every obstacle in their way as the corporate elitists take over. Where is your butcher? Where is your baker? Where is your milkman? Where is your safety to walk out after dark around your town centre? Your education has become a business, higher education is certainly a scam, getting a house is nigh-on impossible, keeping it a drama and entering the work market, extremely difficult. Keeping your job? How? When thousands of companies every day file for bankruptcy.

And the situation is about to get even worse. According to the latest report from the International Labour Organization (ILO) a double-dip jobs recession is about to start and social strife is about to break out like a disease.

Its analysis of the future employment market is "grim", while it points out that the draconian austerity measures implemented by governments have contributed massively to rising unemployment. The result, according to the World of Work Report 2011: Making markets work for jobs, is that "80 million jobs need to be created over the next two years for global employment to return to pre-crisis levels".

Yet jobs are not being created; instead, workers' rights are being lost and everything they have fought for over the last hundred years has been insulted, derided and disrespected, before being consigned to the trash bin. With unemployment spiralling downwards, young people have no hope for the future, no motivation to study and have every right to question who has created this enlightened new system.

It certainly was not the Socialist system which provided and delivered what it promised. Had the capitalist system produced something better, fine. But the arrogance in the claims over decades that it was the better system, and then what we see today makes it clear who was right and who was wrong.

If this is your capitalist, monetarist and liberal economic system, then stick it.

But do not expect others to clear up your mess. Who is responsible? These people should be held accountable and they should pay for the crisis, not those who have worked hard, studied hard, deprived themselves of luxuries and wealth and comforts so as to build a better future for their children, only to see them today demoralised and unemployed.

It is simply not fair.