Obama: Why don't you mind your own business? 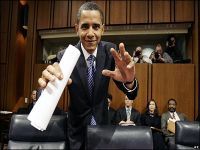 I think I can rightfully say that I speak for billions of people around the world, including a growing number in the USA, when I ask why the leadership in the United States of America does not simply mind its own business and concentrate on setting its own house in order, instead of spending billions of the US taxpayers' money selling wars and supporting terrorists.

Does Obama know what the Jamahiriya system is? If the citizens of the United States of America would like to read and study Gaddafi's Green Book, and the Jamahiriya system - a system of egalitarian people's congresses, where communities choose what they need and the government works for the people, maybe they will find a better alternative to the system they have, where a clique of elitists in Washington runs the show, the rich get richer, the have nots have less by the day, in a country which obviously does not work. They could then look their President in the eye and spit the word BULLSHIT! in his face.

Yet instead of setting his own house in order, what does Obama do? He appears on the Tonight Show with Jay Leno and mouths off about Muammar al-Qathafi not having brought democracy to Libya. So, a question, straight from the shoulder right between the eyes: if the Libya question is about democracy then why did NATO (Obama included) refuse to allow Muammar al-Qathafi to hold a free and fair democratic election?

In claiming "we gave him the opportunity" President Obama is forgetting that Muammar al-Qathafi offered to hold elections but that the FUKUS three (France, UK and US) refused. Why? Because Muammar al-Qathafi would win. So what sort of democracy is Obama peddling?

He is peddling democracy from 35,000 feet, where the White House follows the Pentagon across the globe inventing wars to test out military equipment to create markets to sell arms, involving as many lackeys from NATO as possible to sell more weapons and always in places rich in oil. Then the boys behind the scenes move in with their agencies and Federal Programmes and another country is colonised, another enemy is made generations down the line.

If this is an ethical foreign policy, then Washington's ethics belong to the deepest sewer in the collective history of humankind. Barrack Obama is yet another President to have brought extreme mistrust, disrespect and even a seething, sullen hatred felt for his country in the hearts and minds of the international community. Yet another generation of Americans will be forced to claim they are Canadians when travelling abroad.