Gaddafi "Death": A Tragedy for the World Stage 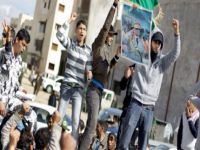 Setting: Benghazi, Libya. Props: a drainpipe, a golden pistol. Cast: Listed below. Lights dimmed, the music starts: maqrum, sound increases slowly. Voice offstage: Once upon a time from the sands of Libya arose a lion who fought bravely against those who wanted his territory. Prompt: (hissing) No! No! The other text! The revised version!

The Traitor: A thin, trembling, quivering coward who jumps at seeing his own shadow.

The FUKUS Three: Noam Zimbalist: CIA operational (An evil-looking shifty little man with horn-rimmed glasses and a seemingly bottomless suitcase from which he pulls out wads of dollar bills)

Sir Bartholomew Burlington-whatt-Botty: British General (An ageing Englishman with a handlebar white moustache, which twitches; on his chest an array of medals with the names of the Massacres in which he participated; a bright red spiked pith hat on his head)

Sarko le Psycho: French businessman (Swarthy, greasy and sweaty-looking, the most revolting individual on stage. Physically repugnant. He walks with a limp and has his back arched, cringing. When he speaks he moves his eyebrows up and down and has a roving eye for the ladies in the audience).

Act I Scene I

Aban: (Frontstage, left) (Music: a melancholy tune, solemn, noble. Instruments: Qanun, maqrum. Rhythm: Tablah) "There was once a good farmer called Muammar, meaning He who lives long. A good man, he set his farm in order, chasing off foreign pirates and thieves. He built an irrigation system to help his workers, to whom he gave homes, whose children he educated and whose food he paid for. It was an oasis, a paradise."

(Backstage, the FUKUS Three appear. Red lighting flashing demonic images on their faces) "But there were those who coveted Muammar's rich and fertile lands..." (Noam Zimbalist reaches into his suitcase and starts throwing wads of notes in the air)... "and who were constantly trying to create instability among Muammar's workers, some of whom succumbed to greed. Their ringleader..." (Voice trails off, focus on The Traitor, front stage) (Make-up: Sheer evil, demonic. He eyes the audience, looking slowly from left to right. A forked tongue comes flickering out of his mouth and he hisses, enticing the audience to boo).

The Traitor: (crawling round Noam Zimbalist's legs, licking his boots). "Master! You have stepped in something! Although my mouth is not worthy, let me clean the sole of your good foot with my tongue!"

Noam Zimbalist: (Kicking The Traitor on his backside)

The Traitor: "Thank you, Master!"

Noam Zimbalist: "Yes, he was caught in a bunker in the city center!"

Kalb: "No, he was hiding in a drainpipe! I know because I shot him. Once! In the stomach (points to his intestines) and here in the chest (points to his leg)"

Himar: "Yes, I saw it, and he died with a shot in his temple. In a sewer!" (pointing to the back of his head)

Abdul-Hakim: "But I just spoke to him yesterday, he was directing things from the south, near the Libyan border area. He is protected by several brigades and also by twenty thousand Tuareg fighters. He's over a thousand kilometres away from Sirte. How could he break into a city that was encircled? And did you guys not mention that Sirt was taken days ago?".

Sir Bartholomew: (snoring...wakes up) "What? Ah yes, I ah... Strafe their water supply to break the blighters' backs, what?"

Noam Zimbalist: "Shut up! He's in Sirte, get it? Sirte! In a drainpipe" (A drainpipe falls to the stage with a clang). He was defending himself with this golden pistol (An aide slides the pistol across the stage to Zimbalist from the side-wings, right). "No really!" (Starts throwing out wads of money). "Believe! Believe!"

Aban: (offstage left) "To whom does it make sense that the Brother Leader, with ninety per cent of his country covered by desert, a terrain he knows and loves and is used to, with the Tuareg vowing to protect him and with the bulk of his armed force command intact, would choose to trap himself in Sirte, the one theatre of battle with no escape route? Interesting the bone-dry drainpipe, because Sirt is flooded with rain, seawater and sewage".

Hinzir: "Saif al-Islam has been captured and is under house arrest in Tripoli! I mean he is fleeing to Sabha! Or rather he has been shot. With a bomb! He is in Sirte too!"

Kalb: "Khamis has been killed!"

Sarko le Psycho: "I am very sorry to be late, it's ma wife, she has been having le bébé. She tells me it looks just like Dete Pocketty and was born speaking anglais and ze first thing she do was sneeff-sneeff".

Sir Bartholomew: (snoring...wakes up) "What? Ah yes, I ah...Take out their electricity grid, what, so that mothers cannot feed their children...disgusting, sniveling bloody little brats. Should be seen and not heard! Today a child, tomorrow a terrorist, eh what?"

Sarko le Psycho: "So whass 'appening? 'u are we supporting?"

Hinzir: "Kill them all! Rape their women!"

Kalb: "There ain't no black in the Libyan sand, make it right! Libya is white!"

Noam Zimbalist: "Yep, we got proof my little froggie friend".

Aban: "And so we are to believe the entire Libyan Government was in Sirte?"

Noam Zimbalist: (Opening a laptop and throwing an envelope on the table) "Check out this video and see these shots"

Aban: "And these pictures here, this is the body of a forty-five year old with a shaven torso. Muammar was sixty-nine and had a hairy chest... And this head here, it has obviously been copied and pasted, look! They're photo-shopped. The original photo is this one, taken in 2008!"

Noam Zimbalist: "No way, we gave you guys thirty billion dollars of our folks' hard-earned tax money. What you done with it?"

Hinzir: "OK then I tell the truth. Gaddafy never fired on his own people, the whole thing was a big lie and the only reason we went along with it was because everyone was getting paid...I was in the London Conference in 2007."

Hinzir: "We created the incident in Benghazi after Gaddafi over-reacted on the radio. His forces would always negotiate with us before an engagement to try to convince us to lay down arms, he didn't want to kill Libyans..."

(Furious gunfight ensues between Hinzir, Kalb and Himar. The mob joins in and splits into three groups, frontstage left and right and backstage center).

Abdul-Hakim: (Frontstage) "Muammar has just announced that if he is dead, then it feels OK. He says he has left a Legacy and has given his people dignity. People may now leave him alone in his oasis and he has his enlarged Jamahiriya to govern, now far beyond the frontiers of Libya. He will concentrate on bringing happiness, schools, hospitals and food to the people of the desert in Libya, Chad, Mali, Niger and Burkina Faso. Nobody will disturb him, he says he has far more to do.

(As he speaks, Libyan people come onstage and gather round him, respectfully. The FUKUS Three are paralysed. The Traitor cowers behind a pillar, backstage right. The mob, Hinzir, Kalb and Himar are furiously fighting each other in different parts of the stage)

"As he brought glory to Libya, making Libyans rich, educating them for free, offering them housing for free, offering them a share of the country's oil wealth, empowering women and keeping Islamist fanatics under control, pronouncing himself against terrorism and being the first international leader to issue an arrest warrant against bin Laden and al-Qaeda, as he came up with the system of perfect democracy, the Jamahiriya - so his legacy lives on and will spread far beyond the desert.

"His Green Book is the perfect answer to Churchill, who said the Parliamentary system was the best of a lot of bad options. The work for His followers is to study and teach his theories in his Green Book. It is a manual of wisdom and should be compulsory reading for those who declare themselves Enlightened.

"If I were Muammar, I would not say anything. I would remain silent so nobody knew where I was. And if the fight continues...who can say He is dead?"