Wicked Witch of the West goes to Libya 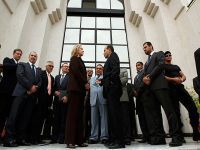 The chief crusader arrived supposedly somewhere in Libya. The exact location is under dispute, claims that Clinton was in Tripoli are doubtful at best. She was under heavy guard and moved about in total secrecy. It was a disgusting display of imperial bombastic arrogance and pompous, pretentious theatrics.

While Hillary Clinton's face may only be marginally considered human, one never ceases to be amazed at how evil this female individual is. As an official of the U.S. government, she came to visit terrorists in Libya and to endow them with huge sums of stolen money.

Hillary Clinton was given the position of Secretary of State, a position one would normally think would demand a person with a certain amount of diplomatic ability. During her visit with the groveling, bowing terrorists, she made the following statement regarding Libyan leader, Muammar Gaddafi:

"We hope he can be captured or killed soon so that you don't have to fear him any longer."

Advocating that someone, especially a world leader, be killed is at the very least the epitome of bad diplomacy. Especially considering her position and the actions of her country. It is also a violation of international law and norms. She is a horrendously shameless witch.

Does the female have sufficient gray matter to realize that what she hopes about Gaddafi, millions of people around the world also express the same hope about her and her filthy, genocidal cohorts?

One might surmise that she has certain anger and aggression issues in her personal life, not being able to keep her own husband loyal or satisfied. Hence, her urgining the dumb sap to become a war criminal and attack Yugoslavia...revenge for Monica.

She never lost the anger and aggression.

To watch the female pretending to be a representative of those who wish to "protect" the Libyan people was an exercise in superhuman restraint of the gag and regurgitation instincts.

As a bad actress on a stage, she was full of arrogant pretense, making as though her role and that of the fascist aggressors was to "protect" when we all know the exact opposite is true.

In one obviously staged scene, of the many the western corporate media produces, the witch told onlookers in a disgusting display of hypocrisy, "If I had a magic wand, I would leave it here." Well she has the broom she flew in on, she can leave that there. How utterly disgusting.

Imagine the Wicked Witch of the West trying to pretend to be the Good Witch Glinda. Sorry, you disgusting creature, it doesn't work. Someone should also tell the bimbo that parading around with that dumpy looking hairdo does nothing for her either.

It just confirms the answer to the question, "Why Monica?" "Why all those countless other females Willy plays around with."

How any female worthy of the name can pontificate about "protecting" in full knowledge of the fact that children and babies are being murdered by NATO and her countrymen and at her very own agitation and incitement, is unfathomable, risible and utterly disgusting beyond words.

Clinton was planning to hold talks with NTC chairman Mustafa Abdul Jalil, Mahmoud Jibril and Ali Tarhouni, all playing their make believe roles. Fact of the matter is, these people are nothing but terrorists, since the power to rule comes from the people.

The people of Libya do not want this trash as their leaders.

The image of the Wicked Witch of the West meeting with a gaggle of demonic, murderous, genocidal criminal filth is one that will cause nightmares for years to come.