Fighting for the soul of the American Dream 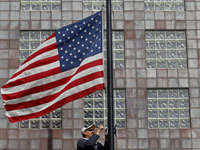 Republics are nations where heads of state aren't monarchs or despots in which citizens elect officials to represent them.

Merriam Webster calls them "government(s) in which supreme power resides in a body of citizens entitled to vote and is exercised by elected officers and representatives responsible to them and governing according to law."

"a republic is supposed to be directed by certain fundamental principles of right and justice, from which there cannot, because there ought not to, be any deviation.

"(It) is executed by a select number of persons, who act as representatives, and in behalf of the whole, and who are supposed to (govern) as the people would do were they all assembled together...."

"When a people agree to form themselves into a republic (they) mutually resolve and pledge themselves to each other, rich and poor alike, to support this rule of equal justice among them....A republic, properly understood, is a sovereignty of justice, in contradistinction to a sovereignty of will."

For decades, working Americans were sacrificed on the alter of unprecedented wealth transfers to Wall Street, other corporate favorites, and super-rich elites grabbing all they can and wanting more.

Industrial America was hollowed out. Monopoly finance capital replaced it. Casino capitalism thrived. So did unbridled government-sanctioned fraud on an incalculable scale.

Keynes once warned about "enterprise becom(ing) the bubble on a whirlpool of (destructive) speculation," causing Depression level hard times.

Wall Street insiders profit all the way to the bank. Privatized money power lets them own politicians and America. As a result, they strip-mine it for profit, rip off investors and homeowners with impunity, grab everything that smells money, and come back for more.

For decades, they engineered housing and debt bubbles built on fraud. They illegally shifted trillions of dollars to tax havens and other foreign locations. Through privatization piracy, they transfered public assets to private hands at below market prices and offloaded liabilities back to government.

They engineered an incalculable multi-trillion dollar heist, and bribed political Washington to facilitate it. They hollowed out America and other Western countries in the process on the way to destroying middle class societies.

Allied with politicians they buy like toothpaste, they established a government-business cabal for enormous profits through legislation, contracts, deregulation, handouts, and free-wheeling ability to do what they please.

In the process, America's dream was destroyed. Money power in private hands to make more of it made it possible. Privatizing profits and socializing losses sacrificed Main Street for Wall Street.

America runs by Goldman Sachs rules, pyramiding Ponzi scams to defraud investors and working households with the full faith and blessing of Washington.

Milton Friedman and his acolytes practically encouraged it by saying government's sole function is "to protect our freedom both from (outside) enemies....and from our fellow-citizens."

It's to preserve law and order, enforce contracts, protect private property, and "foster competitive (unregulated) markets." Everything else in public hands is "socialism....blasphemy."

He said "free markets" work best unfettered by rules, regulations, onerous taxes or any at all, trade barriers, entrenched interests, and human interference. In other words, anything government does, business does better so let it, free from public interference.

He wanted government out of the way to give unfettered capitalism free reign. In other words, Goldman Sachs rules are fine even when economies and working households are looted for private gain.

Millions of angry Americans had enough. Inspired by Middle East and European uprisings, they organized nationwide protests in over 1,100 large and small cities and towns.

Whether sustainable energy continues remains to be seen. Influential behind the scenes power brokers aim to co-opt and subvert it. Media scoundrels no longer ignore it, but inadequately explain root causes, let alone solutions.

Even occasional good commentaries omit what should be said. On October 8, a New York Times editorial headlined, "Protesters Against Wall Street," saying:

....(I)ncome inequality is grinding down that middle class, increasing the ranks of the poor, and threatening to create a permanent underclass of able, willing but jobless people. On one level, the protesters, most of them young, are giving voice to a generation of lost opportunity."

True enough, but omitted was explaining the root cause - money power in private hands to make more of it at the public's expense.

Saying "the economy is not working for most Americans," and that "the financial sector (colluding with regulators and elected officials) inflated and profited from a credit bubble that burst, costing millions of American their jobs, incomes, savings and home equity" is accurate but not enough. Nor is ticking off other festering problems harming millions.

Even saying America "needs a shift in the emphasis of public policy from protecting the banks to fostering full employment, including public spending for job creation and development of a strong, long-term strategy to increase domestic manufacturing" omits HOW!

- fining and jailing those convicted;

- ending duopoly power by creating a level playing for independent parties given equal cost free time on public airwaves and invited to participate in open debates; and

It's not enough to say protesters can't draft legislation, lawmakers have to do it. Laws and regulations needed must be explained. Addressing what kind of country needs to replace what's too corrupted and broken to fix is key, and how it can be gotten spelled out in detail.

It's stressing what's gone on for decades no longer is tolerable and itemizing real solutions. It's spending less time citing problems and more on specific fixes. It's turning America's money run system on its head, saying this no longer will stand and how to achieve it.

It's not rocket science. Whenever it's been done it works, including successfully in colonial America, under Lincoln, and today in North Dakota - the only state with a publicly owned bank that let it prosper throughout today's crisis.

Why not everywhere across America so all states can flourish like North Dakota? Why not in Washington under a nationalized Federal Reserve, not a private one run by and for Wall Street.

It's turns a blind eye to eroding civil and human rights, endorses harsh austerity when stimulus is needed, and barely notices politicians on the take. Initially it ignored Wall Street protests, then treated them dismissively until paying more attention but not enough.

One editorial, whatever its merits, doesn't undue longstanding policy supporting wealth and power. Nor will it change proliferating managed news throughout America's media instead of real information and analysis everyone needs to know.

Above all, people need to understand that today's system is too rotten to fix. Change depends on leveling it and starting over, beginning with putting money power back in public hands where it belongs.

If that's not done, no constructive change can follow except for cosmetic crumbs to meager to matter.

On the other hand, fix problem one and all else is possible.

Going for it must be protesters' top goal. Then address a laundry list of grievances needing to be addressed and ways to fix them.