NATO: Dancing with the Devil in Libya 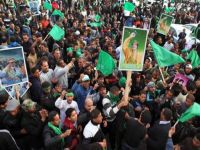 If there was ever any doubt in anyone's minds as to what is really going on in Libya, this weekend proved once and for all that NATO's terrorist "rebels" are about as popular and wanted as an intruding drunkard bawling obscenities from the back of the church at a funeral service. The people of Libya do not want gangs of fanatics running amok.

Our eyes on the ground are Libyans who provide Pravda.Ru with evidence of what is happening on the ground. These tell us that in the areas controlled by the rats (NATO backed terrorists) the people mutter among themselves about how ridiculous the bearded ones look. These bearded ones are NATO's terrorists. When they enter an area, they rape women, destroy property, impale children with metal rods, decapitate people in the streets and lynch Negroes. They are the champions of ethnic cleansing, they are rapists and racists.

Our eyes on the ground tell us that in the areas occupied by this scourge, some people wear the tricolor, the terrorist emblem, not because they support these demons, whom everyone regards with extreme mistrust, fear and hatred but because it is the only means of not being disturbed.

The rats themselves are divided into three absurd-looking groups: heavily bearded hardened criminals who strut around making lewd comments against women, shooting their husbands and often gang-raping girls. These are the leaders, many of these are from Qatar or the United Arab Emirates. Foreigners. Or else those Libyans who went overseas to fight for Al-Qaeda. The second group is composed of frightened very amateur-looking boys trying to grow beards who look as if they have never handled a weapon before, or else do not know how to fire one properly. These are the cannon fodder, the ones NATO and the rat leaders send into the fray ahead of any attack, when they do not force unarmed civilians to act as human shields.

The third group is composed by NATO mercenaries, who are apparently promised to be paid a 10,000 USD sign-on fee but this is only delivered after they have proven themselves. "The money is in your bank account. Congratulations". This is a barefaced lie. What this means is that the sign-on fee is paid once they have proven themselves and this means being sent into combat first against Libya's excellently disciplined and very brave armed forces, backed by the tribal fighters and people's militias. What this means is that many of these mercenaries are sent to their deaths and will never get paid because they are dead before they can pick up the money. And it is never deposited in the bank accounts. So when they lie dying on a battlefield, they know their families will never receive the money.

To get an idea of the sheer number of casualties in play, there are currently around 11,000 rat prisoners of war, while no less than around 153,000 have been killed. Over 3,000 white mercenaries/special forces terrorists/murderers lie strewn across Libya's sands - surely sooner or later their loved ones in the FUKUS countries (France, UK and US) will start to ask questions. The Libyan Armed Forces now have new weapons - including hand-held anti-aircraft missiles, which would explain the recent downing of NATO aircraft and the consequent cessation of terrorist strikes from the air. One wonders what NATO tells the families of the special forces they sent to their deaths or the pilots who were burnt alive as they murdered civilians. But then again, how many of these are the very expendable Latin Americans who do not count in NATO statistics?

To back up a NATO commander who last week claimed the job is only half done, our eyes on the ground point towards it not even being half done, and the situation is rapidly spinning way out of NATO's control. What did they expect? NATO was warned in this column well before it attacked and every single day as it got itself deeper and deeper into trouble.

Cameron and Hague in the UK are far too arrogant and have between them far too few powers of judgement to be able to handle a withdrawal and their option will be to forge ahead and bury billions upon billions of their taxpayers' hard-earned cash in this childish ploy to remove a man loved by the majority of his people so that London and its banks can get their hands on Libya's assets.

The larger picture is a backlash across Africa which will freeze British interests out for generations to come, extreme bad will across the globe - the last five Prime Ministers have involved the UK in six wars - and total instability at the gates of Europe. Islamist and pro-Sharia elements are set to be installed in Tunisia and perhaps Egypt while in Libya the factions which constitute the rats hate each other and are set for a fire-fight among themselves.

A fine mess. And that is what you get when you dance with the Devil. In the case of Libya it is unclear as to whether NATO is the Devil dancing with the terrorist demons, or the other way round.