To honor the memory of the immortal Che 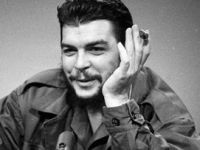 Che Guevara and the dead who never die

Eduardo Galeano says when he met Che Guevara, he was a man who said exactly what he thought, and lived exactly what he said. So it would be today. There aren't many men carved in this wood. As a matter of fact, there isn't much of that wood in the world. But there are the dead who never die. Like Che.

And of the dead men who never die, we must honor their memory, to deserve his legacy, to be able to understand it. Not on T-shirts: but in dreams, in hopes, in certainties. So they never die.

On the day they executed Che Guevara in La Higuera, in a hamlet lost in the wilds of Bolivia, Julio Cortazar - who was then working as a translator for UNESCO - was in Algiers. At that time - October 9, 1967 - the news took much more than a day to travel around the world, and still more to get to Algiers from La Higuera.

Twenty days later, back in Paris, where he lived, Cortázar wrote a letter to Cuban poet Roberto Fernandez Retamar telling what he felt: "I let the days go by in a nightmare, buying one newspaper after another, without wanting them to convince me, looking at these pictures that we all look at, reading the same words and entering, one hour after another, in the hardest conformity... It is the truth that I am writing today, and before that, it seems to me the most banal of the arts, a kind of refuge, almost of pretense, replacing the irreplaceable. Che died, and I have nothing more than silence."

I had a brother

that was in the mountains

while I was sleeping.

I wanted it my way,

I took his voice

I walked at times

my brother was awake

while I was sleeping,

Cortazar's anxiety, the anguish of knowing that there was no other choice but to accept the truth, the fog of a nightmare from which no one could wake up and leave. All this happened again, that October 9th, 1967, for people throughout the world who, like him, had never met Che.

After exactly 44 years had passed from when Che was killed, what comes to mind are the words of Cortazar, the poem I remember in his serious and and definitive voice: "I had a brother, we never met but no matter, my brother was awake while I slept, my brother appeared behind the night, its chosen star."

The previous day, October 8, 1967, Ernesto Guevara, mistreated, isolated from the world and life, with a leg injured by a bullet and caught loading a gun, surrendered. He looked like a beggar, a pilgrim from one's own dreams, he was thin, the thinness of the strange and abandoned ones. He was taken to a hut where he was working in a rural school in La Higuera.

The next day he was interrogated. First, by a Bolivian lieutenant named Andres Selich. Then a colonel, also Bolivian, named Joaquin Zenteno Anaya, and a Cuban named Félix Rodríguez, a CIA agent. Then came the final order: General René Barrientos, Bolivia's president, told them to liquidate the subject.

The choice to execute him was a soldier called Mario Terán. The final instruction: Do not shoot the face. Only from the neck down. First the soldier hit the arms and legs of Che. Then, the chest. The last of the eleven shots were fired at 1:10 that Monday afternoon, October 9, 1967.

Four months and 16 days earlier, Che turned 39 years of age. His last image: the skinny body, lying spread out on a laundry tub in a wretched shack in a miserable hamlet of a miserable country in Latin America. His definitive face, his open eyes - as if looking at a future that he dreamed, but would not see, looking at each one of us, his eyes open forever.

Forty-four years after that Monday, a new man dreamed that it did not happen. Would his ideas fit in today's world? How would he see what happened and is happening? What would he have thought to learn in that he became a kind of icon of romantic dreams that lost their place?

It should have. It must have. Che has become a commonplace icon, a beautiful face printed on T-shirts. But he knew, he knows, that it was much more than that. What existed there, what existed behind that face? This is the question that prevails.

Che lived a short life. More years went by since his death than the years of life that he lived. And the question remains, persistent and stubborn as he is known to be. How would Che Guevara be in these our days of fear? He would perhaps change some ideas without changing one millimeter of his principles.

So it would be today.

Now there aren't many men carved in this wood. In fact, there's not much of that wood in this world. But there are the dead who never die. Like Che.

And of the dead who never die, it is necessary to honor their memory. His legacy deserves to be known and to be understood. Not on T-shirts, but: in dreams, in hopes, in certainties. So they never die. Like Che.

Translated from the Portuguese (and Spansih) version by: