Usually the saying goes, "A house divided against itself cannot stand." However, thanks to NATO, Libya has become a looney bin and the wackos, the loonies are running the asylum. 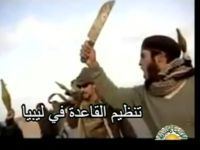 We have known from the very beginning that this gang of terrorists and criminals known as the National Transitional Council were constantly fighting among themselves. Strange that garbage at NATO hasn't noticed.

The most significant event of their in-fighting was the killing of General Abdel Fatah Younis, the chief of staff of the rebel forces. Curiously enough, the NTC issued an arrest warrant for Younis hours before his assassination.

After much controversy regarding him being missing, dead or abducted, his body was finally found partially burned and full of bullet holes. after constant denials of knowing his fate or that he was even missing.

Mahdi al-Harati, deputy of the Tripoli military council resigned due to tensions with NTC over the handling of Tripoli security.

In the midst of this constant in-fighting, Mahmoud Jabril announced finally that he will not take part in any new government. Of course, it is likely tied to reports that while he was a part of the Jamahiriya government, he stole at least 2 billion dollars.

Continuing on in this manner, the TNC has been a bottomless pit for the west to dump endless amounts of money into, but of course they don't care, it's not their money they are dumping...but frozen assets they themselves have stolen from the Libyan people. Where the money has gone, no one knows. No one has been paid, no services are restored, to the contrary, services continue to be disrupted.

The Libyan people did not ask for, do not want and did not appoint these thieves and terrorists as their government.

With the TNC as a government, Libya would never recover financially and turn into a huge debtor nation...which is just what the west wants. It would turn into a no man's land...unsafe for human life.

Never mind that this criminal gang of terrorist thugs is capable of only violence, destruction, rape and looting. When these terrorists move in, the population either flees or goes into hiding. It's a fate worse than death to be discovered by them, especially if you are black, female, or a supporter of Gaddafi.

Black Libyans are lynched, women are raped, people are mutilated: beheaded, disemboweled, have fingers cut off and every imaginable torture. If someone says their heart belong to Gaddafi, their heart is literally cut out of their body.

Many human rights organizations have told TNC that their practices of torture in the prisons has to stop. Would you want these thugs running things where you live?

Nothing any of them says can be trusted. They do nothing but lie continually. They have made claims about Gaddafi having fled the country, his sons being dead or captured and his spokesman being captured. Their lack of ability on the battlefield is also a source of continual lies as they stage scenes to pretend victories that never happened.

Speaking of staging scenes, their lies about a mass grave proved the same as the grave contained nothing but camel bones and why camel bones would be in a grave at a prison is beyond comprehension unless planted there.

Their appointed "military commander for Tripoli" Abdel Hakim Belhaj has had an arrest warrant put out for him. His fate at this time is unknown. There were at least two attempts to kill him. We know from previous events what an arrest warrant means.

So there is obviously zero chance of stability, much less would the promised freedom and democracy result in installing this scourage as Libya's government. Thankfully, they are fighting so much among themselves, they just can't get it together.

What you have with the TNC is nothing short of a gang of lunatics trying to turn Libya into a lunatic asylum, a hell on earth. Bravo for your good work, NATO.

Stinking head lunatic Mahmoud Jibril called for the assassination of Jumhuri from ArraiTV in Syria because they broadcast truthful news reports. The TNC does not allow the media to report anything other than what they dictate to them. Of course, the western corporate media has been more than willing to oblige.

Everything you will read, see and hear in western corporate media is exactly what the TNC and NATO have dictated to them.

Despite their criminal murderous nature, NATO keeps dumping this trash into Libya. What are these fools being promised by the obviously bankrupt west? How utterly stupid does one have to be to jeopardize life and limb for a bankrupt promise?

They aren't being paid, we know they are being promised all kinds of money. They probably also envision some cushy life of money and power, however delusional that is. But the supply of cannon fodder, which is all they are, keeps on coming.

For them to be sent to Libya is a certain death sentence, there is nothing to be gained. However, there seems to be no shortage of the supply of stupid, foolish, gullible young men. They come mostly from Qatar and Egypt, as well as Tunisia, Afghanistan and Iraq.

Should NATO successfully install this garbage as the government of Libya, stoning, beheading, mutilation, Sharia law and pedophilia will be the law of the land. We already see their behavior before assuming power, heaven help the people of Libya should they ever attain power.

We have already seen as well how NATO provides water and electricity for the people in Iraq and Afghanistan, they have been pushed back into the Stone Age and will remain there probably until the 10th millenium at the soonest. More than 50 percent of those populations have to go without water and electricity.

That's all NATO is good for, destroying, killing and destabilizing.

NATO is anathema to civilization, but what to expect from savage barbarians? Ask the people of the besieged city of Sirte, who are being bombed non-stop around the clock. How many times was the hospital itself targeted by NATO?

When were hospitals a legitimate target for military hardware? The hospital has lost a good deal of its medical personnel. There is no electricity, little water and no medications for any procedures. Patients were murdered, including mothers and new born babies.

Surgeries are done without any anasthesia. Imagine your child having an operation with nothing to stop the horrendous pain?

For that matter, when did rescuers become legitimate targets, since NATO bombs and helicopter pilots shoot at anyone that moves, thus preventing rescue attempts? Injured people are also targets on roads leading to the hsopital.

Logically, one should conclude, if people are indeed repulsed by what is transpiring in Libya at the hands of Wall Street and London, the corporations, banks, and institutions involved should be exposed, avoided, boycotted and eliminated totally so that no innocent person, man woman or child, should ever have to die or suffer because of them and their greed ever again.

The filthy lunatics and murderers of the TNC are their proxies, their real face. Forget the false veneer of civilization, manners or humanity.

The right to protect or is it the right to commit genocide and war crimes? Even the Red Cross has to admit that NATO has created a humanitarian disaster here. CREATED one, not prevented one.

These are the countless war crimes which NATO must be held responsible for. Where is the outcry from the world community?

All of you are responsible for these crimes if you sit there and say nothing to no one.