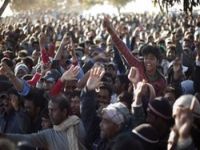 The conduct of international relations involves the necessary prerequisites of maturity, integrity, balanced and rational policy-making and respect for the law. Judging from what we have seen in the last decade, we can draw the most shocking conclusions: none of these precepts underlie the conduct of policy today, at least by NATO.

While conducting international relations policy may be no more than a game to some people, as they pander to and serve the selfish interests of their corporate puppet-masters from whose pockets they sprang and to whose tune they dance, it is important to point out that the policies they make directly affect the world community of seven billion people. Therefore to these seven thousand million people, the policymakers are directly accountable - and shall be held to account.

There can be no doubt whatsoever that when we speak of NATO in general and the FUKUS in particular (France, UK and US), international policy-making no longer obeys the fundamental laws regulating international diplomacy. There is a name for these laws: treaties, UNSC Resolutions and Conventions. Rather than building on the global bonds of trust which go hand-in-hand with the discovery and establishment of common human values in a globalised village, creating a world community based upon fraternal and peaceful relations implemented through development and not deployment, our recent history has been hijacked by gangs of political thugs who represent the greedy selfish and vested interests of the few, bending and breaking the laws - and murdering people - to foster personal agendas.

Let us examine the case of Iraq. A country which posed no threat at all to the countries which invaded it, a country which did not have Weapons of Mass Destruction because the weaponry had been destroyed (moral number one: do NOT destroy your WMD, it is the only thing guaranteeing that you will not be invaded), was destroyed, its civilian structures targeted by the murderers which gather around NATO, using WMD and "posing an immediate threat" as their casus belli. The war crimes committed in the ensuing months were staggering.

Let us examine Kosovo. UNSC Resolution 1244 (1999) states clearly that this Province is an integral part of the Federal Republic of Yugoslavia (which later divided into the Republic of Montenegro and the Republic of Serbia, to which Kosovo has always belonged) through reference to the Helsinki Final Act and to point 8 of Annex 2 of 1244. Yet NATO and a substantial number of countries (mainly in western Europe and North America, where else?) have "recognised" Kosovo's "independence" as a State, against international law, against all the principles governing international and diplomatic relations. These countries have become pariahs of the world community, rendering international law to the status of irrelevance.

Let us examine Libya. A "rebellion" was fostered by external parties, which have long coveted Libya's resources and which have long planned to oust Libya's leader Muammar al-Qathafi, mainly due to his tremendous development plans for Africa which cost selfish western interests billions. When the Libyan Armed Forces fought back, they were bombed and the policy of NATO is to bomb "rebels" (many of whom are foreigners, terrorists, looters, rapists, arsonists, thieves, murderers and torturers) into "Government". Once again, every rule in the book has been broken, the UN Charter, UNSC Resolutions and the Geneva Conventions have been flouted and NATO has directly or indirectly been responsible for up to 150,000 deaths.

This is not policy-making, these are not international relations. These are criminal acts and they have labels: murder, attempted murder, acts occasioning grievous and actual bodily harm, kidnapping, destruction of property, theft, crimes against the person, crimes against property and a series of breaches of treaties and conventions occasioning war crimes.

The NATO and FUKUS policy-makers are, in a nutshell, a bunch of criminals and as such, must and will stand trial.

From words to action

Those involved in the crimes committed in Libya, and this includes the NATO military and political hierarchy, should be worried. In fact, they should be very worried,  because sooner or later there will be a knock at their doors and a court case ahead. That such a measure should be undertaken by private entities and not one single State gives credence to the notion that so much needs to be done to form what is de facto a world community when the need for crisis management appears.

On another front, an encouraging measure has been issued by PACE (Parliamentary Assembly of the Council of Europe). On October 4, 2011 PACE adopted a Resolution calling on Member States not to support in any way the de facto authorities of territories resulting from unlawful secessions, in particular those supported by foreign military interventions. Any conflict should be solved exclusively by peaceful means on the basis of international law.

This is basically a declaration of checkmate to those States which recognised Kosovo because they thought it would be a cool thing to do with a view to getting new contracts or guaranteeing old ones with NATO cronies and masters but without thinking through the consequences of their actions.

It appears that in a world where international agreements and conventions are not worth the paper they are written on because we have politicians like Messrs. David W.D. Cameron, William J. Hague, Hillary R. Clinton, Barack H. Obama, Nicolas P.S. Sarkozy, Alain M. Juppé, together with sinister advisers such as Bernard-Henri Lévy and Zbigniew Brzezinski infesting our world community, calls from the more rational States which have historic traditions of respecting international agreements (the BRIC members for instance) should be backed up with periodic General Meetings constituting benchmarks on policy formulation.

Among these, the Peace of Westphalia Treaties (1648) and the Helsinki Final Act (1975) stand out as the launching pad for general guidelines governing international relations and a reiterating of these principles three centuries later, both drawn up by enlightened individuals and valid human beings who leave a Legacy. It is time for another General Meeting and a reaffirmation of these common human rights and values and a legally binding document to guarantee their implementation while at the same time stating clearly that nobody is above the law and that everybody shall be accountable for their actions. The clique of criminals mentioned above do not deserve to grace the same pages of international history as the architects of Westphalia and Helsinki. They will most surely enter them as the pariahs that they are, snivelling and grovelling and cringing as future generations throw stones at their sickening memories due to the blight they have left on the collective identity of humankind.

Future generations will judge us on where we stand and as an involuntary opinion-maker, for what little I am worth, let posterity judge me very clearly on my position today. At least I do not have to turn away or lower my eyes when I look myself square in the mirror. It is time the world community rose up and stood for what is right, respecting the law and holding the criminals amongst us to account.