Libya teaches the world a lesson in courage

NATO: all that's missing are the goosesteps 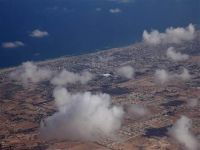 As we move into the eighth month of the imperialist, Hitlerist, fascist, Luftwaffe terrorist assault and aggression on Libya, it is becoming more and more apparent to the world community that NATO has left no evil deed undone that was known in history to have been done by the Nazis.

We have seen widespread pogroms and rapes against black Libyans, the perpetrators supported and protected by NATO.

We have seen civilians strafed by helicopter gunships. What can only be described as flying garbage is attacking anyone on the ground that moves, child, woman, anyone.

The NATO genocidal bombing campaign has been constant, ferocious and indicative of utter insanity and desperation to bring the heroic Libyan people to their knees. But they will not bow, they will not surrender and they will not leave their homes as the flyers dropped demand.

We have seen the bombing of many countless hospitals, schools, food storage areas, the water supply, electricity grids and radio and televsion centers. These are extremely serious war crimes.

Aid workers have been instructed to give aid only to the terrorists, or they will be attacked, so they have refused aid to loyal Libyans. However, they did manage to deliver some body bags. How generous of them.

We have seen the poisoning of water. The use of cluster bombs and white phosphorous as well.

One man has reportedly died of hunger, and with the total lack of food and medicine, more will die this way in this deliberate campaign of genocide. They want to kill everyone they can until they give up and surrender.

Sirte is decimated by NATO's non stop bombing as they provide cover for terrorists to kill, steal and prevent humanitarian help to reach people while they also cut off electricity and water to the people.

A mosque was bombed during prayers and twenty-five people were killed. Forty-eight civilians who were trying to rescue people from destroyed buildings were bombed and murdered by NATO pilots today. In the last two days, at least 100 children were killed, without counting in any that may be buried in rubble  Damn these evil demon war criminals to hell, the right to "protect"??

STOP THE CONTINUOUS BOMBING OF SIRTE AND LIBYA NOW!

STOP THE GENOCIDE AND THE MASS MURDER OF LIBYANS!

STOP DENYING LIBYANS THEIR BASIC RIGHT TO LIFE BY CUTTING OFF WHAT PEOPLE DESPERATELY NEED TO LIVE!!!

Despite the murderous terror unleashed by NATO, Libyans are teaching the world a lesson in courage. They keep on fighting and resisting despite the worst possible conditions, being deprived of virtually all necessities of life.

But sometimes nourishing the body is not nearly as important as being true to the soul and spirit that longs for freedom, that refuses to be a slave, that refuses to lose their dignity and pride.

All glory, honor, praise and admiration for the heroes and heroines of Libya!!!

Libyans have built a great country in the Jamahiriya. This is also a testament to the greatness of this people. I think that if the same Europeans and Americans who are perpetrating this crime against humanity were instead the object of the same sort of genocidal campaign, they would have surrendered and bowed down on the second day, latest. They are gutless, souless, amoral stinking cowards and vermin without a trace of humanity, decency, honor or the spirit of self sacrifice.

Obviously this wanton disregard for international law and human decency shows that they are no longer human, they are beasts, vermin, savages, barbarians. They are demonic filth.

By their fruits you shall know them...all that is missing from this Nazi, fascist display of terror and crime are the goosesteps.  The UN Resolutions absolutely forbade boots on the ground...so what was the U.S. 82nd airborne doing landing their garbage in order to rush to take an oil field?

No good will ever come from them unless they perhaps suffer a similar tragedy as the Libyan people have. As I said before in this space, there is no earthly or unearthly possibility that the west and NATO scum will get what they want: the spoils of Libya. It is totally impossible.

They will not impose terrorists as the government of Libya, that is becoming very obvious as the terrorists fight among themselves, destroying each other, which garbage has a tendency to do.

They totally and completely debase women with rape and blacks with murder and ethnic cleansing. The lynchings they have done remind one of the Ku Klux Klan.

What kind of sick scourge goes around gouging out eyes, cutting off body parts such as fingers and disemboweling someone or cutting out their intestines???...is this what western freedom and democracy are all about? Obviously. Such "values" we can do without.

It was also mentioned in this space that one of the first bombing actions called for by that den of thieves known as the NTC was on a building that contained records of their criminal behavior. One of their gangsters, Mahmoud Jibril, has declared his intention not to be a part of the intended government. Could it be because it was discovered that while he was part of the Jamahiriya government, he stole at least 2 billion dollars?

All of this crime is supported and protected by NATO...

There is no evil they have not done to the Libyan people. Neither is there any war crime not committed by them against the civilian population of Libya, the "responsibility to protect" is a charade, a ruse...the biggest lie ever told.

Growing up, I was so overwhelmed with a feeling of reverence and respect for the courage of the defenders of Stalingrad and Kursk, the Great Patriotic War. It was, in my estimation, the greatest display of human courage, will, dedication and heroism in the history of the world.

Now we have the Libyans...

In the future, airlines should take care in who they hire for pilots. How did you learn to fly and were you in the military dropping bombs on civilians? If so, you would never be qualified to have human life in your hands.

Western leaders, NATO and especially the terrorists they had hoped to use as a puppet government are not fit to rule anything. They are not even fit to live.

It's time for the Nuremberg trials, and I understand it's beginning to dawn on some of them that they are liable for prosecution for their mamy crimes against humanity. I personally promise that if those trials do not happen to bring at least one of them to such justice with my own legal action.

I also understand they are reconsidering the continuation of their imperialist, colonialist aggression and genocidal bombing. Don't add to your crimes and bow out NOW. Do not force the terrorists to be the government of Libya.

The right to govern comes from the consent of the governed, you should know that, and the people don't want your stinking NTC terrorists.

In the meantime, here you have this inspiring lesson in courage. Such people will never be defeated. It wouldn't take much to rise up to the murderous, fascist leaders and make them stop and make them leave Libya alone.

Contact government officials, members of the UN, or take to the streets, but don't just sit there. A world revolution has already started.