Shakespeare, Angry Birds, and The Savior of Human Terrain System 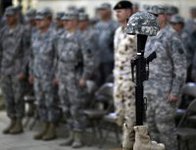 "How can anyone save a broken program from an office 1000 miles away?--That being the office where Colonel Sharon Hamilton [program manager] studiously works on her PhD. The same office where her deputy (another Army O-6 Colonel) hangs out and plays Angry Birds on his Human Terrain System [HTS] provided I-Pad."

The Savior of HTS

According to sources, both Colonels have visited Fort Leavenworth, Kansas, (HQ of HTS) a handful of times and have participated in some After Action Reviews (AAR) with students. The Colonels have heard what is wrong with the HTS training program and have chosen to ignore the issues. "The last time the HTS Deputy visited Leavenworth he told the graduating cycle, 'Do your tour and get out of HTS as quick as you can.' They have heard from many deployed team members about troubles in the field and have ignored those issues too. Both Colonels are very much aware of the issues surrounding the totally inept HTS Training Director but have chosen to leave him in place. So it's back to her PhD and his Angry Birds."

Hamilton apparently made a rare appearance to participate in a scheduled AAR and graduation ceremony with the July Cycle. But, according to observers, "as predicted she had no intention of letting the July Cycle ask questions of her or listen to their observations of training. Instead Hamilton told stories of how she alone has saved HTS. When one student was able to get a question in on how assignments were being made she ignored the question and continued to tell stories. The students had many questions for the Colonel that did not get asked. On every student's mind was 'Why did the program let go of so many quality HTAs and promote her TRADOC G2 HTA buddy to Social Scientist?'"

Colonel D and Toys Are Us

According to observers, "Colonel D's" military extension has been denied because he is being medically retired by the Kansas National Guard. So the HTS is finally rid of him.

"Colonel D, soon to be "Mr. D" is a finalist for the for the newly created DAC position of Director of Training. "The person doing the interviewing and making the final hiring decision is Colonel Sharon Hamilton. Ah NEPOTISM! The DAC's that work in HTS training have started a pool and most are betting that Colonel Hamilton will pick Mr. D as he is the perfect scapegoat for everything broken within HTS Training, now and into the near future. She does not want to retire from TRADOC with a blemish on her military record. Good idea COL H," said a source.

Colonel evidently imparted some of his leadership philosophy to the HTS training staff and faculty during a meeting. According to sources, "he recounted how he used to be a manager at a Toys 'Я' Us and decided to quit just prior to the Christmas season as this was the craziest/hardest time of year. How is that for sharing a leadership story with your subordinates? When things get tough - QUIT! Yet another golden example of FAIL! Some cartoons with a Toys 'Я' Us theme went up all over the HTS training facility. The favorite post was just inside the front door of the facility. It stated 'Toys Я Us - School of Mangement.' Management was intentionally misspelled.

The second most favored cartoon depicted Geoffrey the Giraffe standing amongst his subordinates. The caption stated 'Geoffrey building report with his colleagues.' This referenced the time when Colonel D saw the word "rapport" on a whiteboard during a briefing and asked "What report are you referring too?" The faculty members present had to explain the word 'rapport' to him. The rest of the week it was like a child that had just learned a new word. A popular saying within HTS is 'The L in HTS stands for Leadership.' OUCH!"

Oberon Associates, a subsidiary of Quebec based CGI, has been awarded just over $227 million (US) to run the US Army's Human Terrain System (HTS), which "directly supports combat units in OIF/OEF" according to the Office of the Assistant to the Secretary of the Army. It is interesting to note that Oberon was the King of the Fairies most notably in Shakespeare's A Midsummer's Night Dream.

It may be good to have literary minded contractors running the show; if they can understand Shakespeare, maybe they can figure out HTS.

The Brits (BAE Systems) seemed to have mucked things up with the help of DCS, TRADOC-G2 and OSD/Intelligence, so it was time for a change.

Now it is up to the Canadians (CGI) to set things right. The size of the award makes it clear that HTS is going to be marketed at every turn through CGI Federal's operations with the approval of DCS, TRADOC G2 and OSD/Intelligence. It also says that US Army Civil Affairs is out of $227 million bucks that it could have used to perform the same functions.

According to one source, "CGI should fire or demote every manager and supervisor currently in those positions. But the decay and morale is so systemic that I do not see how CGI can succeed."

The contracting authority for HTS is at the Mission Installation Contracting Center (MICC) located at Joint Base Langley-Fort Eustis. TRADOC has a unit located there. An official at MICC said "the place of performance" would likely be scattered around the country as it is now but that some elements of HTS would be located at Langley-Fort Eustis. There are some changes being made in HTS that may shift the location of personnel from the Mid-West to the Eastern seaboard. The MICC official said "there are spacing issues at Langley-Fort Eustis and not everyone will be located on post."

Langley-Fort Eustis is home to the USAF 633rd Air Base Wing and is composed of the 1st Fighter Wing; the 480th Intelligence, Surveillance and Reconnaissance Wing; and the 192D Fighter Wing.

The award of HTS was announced this morning. BAE Systems was NOT awarded the re-bid. This is very sad news, but our focus still needs to be on keeping our men and women in uniform safe and that means ensuring our customer (HTS) is successful. Work will continue as usual, until I inform you otherwise. Please continue to show up for work (even after the 27th). I will provide more information as soon as I know more on a transition, timelines, etc. Thank you all for your hard work and dedication.

According to one source, "HTS has 180 Defense Army Civilians (DACs) on Compensatory Time and Leave. Many of these are awaiting their next tour in theater. Additionally, the program has approximately 140 DAC's supporting operations in Afghanistan. This means the HTS program has more DAC's on Compensatory Time and Leave than it has deployed. There are dozens and dozens of formerly deployed HTS personnel that would also come back and work. So why is there an expensive HTS training program?"

A few months ago HTS advertised a DAC position for the Chief of the Training and Education Division (CTED). Sources say that the candidates were narrowed down to two for the final competition. They both were subsequently interviewed by Colonel Sharon Hamilton, Program Manager of HTS.

"It is important to note that this competition took place during this same time period the program was going through a number of investigations with one of them being accusations of racism," said a source.

"The guy hired for the position has a Master's Degree, is a minority, and has no experience that lends itself to the position. The bizarre thing about this situation is that he has several PhDs working for him that are clearly more qualified for the position. In fact, one of the PhDs performed the duties of this position for over a year and during that time the program was completely redesigned under his leadership. So everyone decided to give the new guy a break and see what he could do. To date he has done nothing that you would assume the CTED to do. He is clearly uncomfortable in this unfamiliar setting surrounded by DAC's and contractors who have more education, experience and skills than he does. Plus, like the rest of the HTS leadership, he suffers from the inability to communicate effectively, lead, and appreciate the talents and experiences of those around him. Several of the DACs under him have already filed complaints accusing him of creating/fostering a hostile work environment."

"Glevum's analysts are hard-working, creative, and properly credentialed in language and subject matter. SSRA has taken a lot of hits about its reliability and validity, but these analysts are at the mercy of whoever created the research design and collected the information. In addition, all data collected in a battle-space is subject to those kinds of problems and the SSRA analysts acknowledge that.

Glevum had some analysts who very thoughtfully conceived of a qualitative study for understanding stereotypes in Iraq. What they did was collect jokes told in Iraq. The creative approach to the study was to be commended. Few of the HTS internal SSRA critics in the Research Reachback Center or on the HTS teams in theater have done any better and most have done much worse in collecting data and getting good results either through qualitative or quantitative research. Very few will state in their research proposals or plans that there might be limitations to a study in terms of getting good data and results."