Questions for Sarkozy, Cameron and Obama - 1 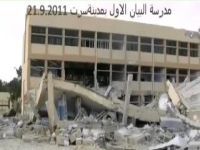 France - UK - US (FUKUS) have launched the most sickening assault against common decency, morals, international law and human goodwill since Hitler's goose-stepping Nazis sent millions to the concentration camps. Here is the first series of questions placed to the three ringleaders of this most shocking terrorist outrage.

1. What is your reaction to the fact that the forces under your commend murdered the three grandchildren of Colonel Gaddafi? Why haven't you even issued an apology? Would you like the same thing to happen to your families? And if it did, should we "apologise" or mumble the word "regret"?

2. What is your reaction to NATO's murderous terrorist strikes against civilians? You will be aware of the scope of your carnage in Libya which makes 9/11 look like a picnic for fairy godmothers. How do you feel about holding joint responsibility for the murder of tens of thousands of people (up to 63,000 to date)? You couldn't care less, could you?

3. If it is NATO's mandate to protect civilians, then why did you strafe their water supply? Are you aware that this is a war crime? Be honest, it was "to break their backs", wasn't it?

4. Why did the British Foreign and Commonwealth Office support a group listed in its terrorist list - LIFG, in direct violation of the UK's Terrorism Act? And is anyone aware of the FCO's answer? Here it is:

In July 2009 the LIFG issued a statement rejecting its previous association with Al Qaeda, its methods and its tactics.  The UK Government welcomed this public statement as we do statements from any organisation renouncing violence and the ideology that supports it."

Hmmm...the FCO isn't that good really is it? Because a three-second search on the Net reveals the following document:

In which the following group is listed:

The LIFG seeks to replace the current Libyan regime with a hard-line Islamic state. The group is also part of the wider global Islamist extremist movement, as inspired by Al Qa'ida. The group has mounted several operations inside Libya, including a 1996 attempt to assassinate Mu'ammar Qadhafi.

The FCO is therefore liable for prosecution for breaching the UK's own Terrorism Act. So if the LIFG disbanded in 2009, why is it on the FCO proscribed list in 2011?

5. If you people support the NTC, then you are of course aware of its atrocities. Therefore why do you not utter a word condemning the terrorist acts of the hordes you support by military force?

6. The recent crackdown in Yemen where tens of protesters were shot was met with a wall of silence, yet when terrorist elements opened fire on civilians in Libya and blamed Colonel Gaddafi, you took up arms. Why?

7. Is it not true that the real reason behind this act of terrorism and breach of international law, violation of the UN Charter and Geneva Conventions is because of Colonel Gaddafi's projects in Africa, which would cost your own systems and entrepreneurial universe severe damage in loss of revenue?

8. Is it not also true that Colonel Gaddafi was about to reveal a new currency based upon the Gold Standard, a far more sensible idea than basing it on pie-in-the-sky credit guarantees which vaporise into thin air wiping billions daily off the markets and ruining pension funds and companies and endangering jobs, and that such a currency would have devastated your financial markets? His idea would have saved the world economy, albeit ruining yours. And you three are that selfish to slaughter hundreds of thousands of people to protect your flawed system, greedily and selfishly?

9. What do you have to say to the allegations that your NTC is basically a bunch of racists who have vowed to ethnically cleanse Libya from Negroes? President Obama, you have insulted your nation, you have insulted the Nobel Peace Prize, but now you insult your father's race? What kind of a creature are you and how low can you get? Can you sleep at night? Thought not.

10. Finally, I have not heard one word from the three of you in response to the mass rapes carried out by the NTC against Negro women in Libya. Does this mean you are ashamed of their actions? After all, you unleashed them, so the responsibility is partly yours.

In conclusion, you three have the blood of children on your hands, as well as adult civilians. Do you hear their screams ringing in your ears every night, do you taste their blood on your lips, do you see the terror in their eyes as one of your cowards blasts their faces off them from 30,000 feet? You should, if you were human... and the more you try to block out the images, the more vivid they will become, and will haunt you three to the very end of your days on this Earth and then during an eternity burning in Hell with the Devil, your Master.