The sickening filth our international community has become 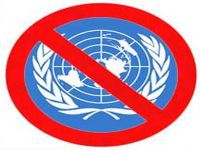 Never have I felt so revolted, disgusted, disappointed and violated at belonging to the same species as those sickening creatures crawling around our international community today. The Libya Question and the subsequent UN General Assembly in September was a study in spinelessness, lack of morals, absence of fibre and total disrespect for the law.

An analogy: The proud home owner, the son and the evil neighbour

The analogy is perfectly simple to understand. An evil neighbour covets someone's rich lands, turns his son into a drug addict, supplies him with heroin for free and then gets him to leave the door open one night. The son trashes the house, smashing everything, breaking the furniture and setting fire to it, while the evil neighbour rapes the wife and kills the remaining three children.

The evil neighbour uses his influence to bully, cajole or bribe the other members of the community to recognise his right to the house, claiming he will keep the son under control and expects the owner to hand him the keys. The owner valiantly and courageously fights back. The other members of the community call on him to stand down and to hand over his keys. He refuses, saying the house is his and he has the right to defend himself.

The other members of the community come together and have a General Assembly at which the vast majority recognise the new ownership rights and draw up plans to recognise the evil neighbour and the drug addict as the rightful representatives of that house in the community. A small handful refuse, saying that under the law, the intruder is always an intruder and that outside forces cannot impose ownership by force.

Moral of the story: If someone breaks into your house, torches it, rapes your wife and kills your kids, you just bow down and hand him the keys.

Moral 2: Arm yourself to the teeth so that if someone breaks into your home, you have the firepower to destroy him and his property and punish those members of the community that recognise the intruder's rights.

Under international law, the Libya Question was an internal affair of the Jamahiriya government of Libya; it was a rebellion sponsored from abroad (illegal), financed aided and armed from abroad (illegal), planned and programmed well in advance by the French, British and Americans (illegal) whose selfish interests were being blocked by Colonel Gaddafi and his African projects.

It matters not whether the majority of the members of the international community shrug and look the other way, accept bribes and trade influences and interests, allow themselves to be bullied and pushed into accepting the new status quo: the law is the law, what is right is right and what is wrong, is wrong. The precept "Well, what is done is done, it is too late now" is an excuse for snivelling cowardice and those who follow it have lost any vestige of respect.

Let us see the terrorist excrement that this "international community" supports: racists, terrorists, al-Qaeda members, some having been arrested by NATO for fighting against the organization, torturers, murderers, arsonists, rapists, thieves, vandals and petty criminals - basically just about all the filth the sewers of Benghazi could throw up, their ranks swelled by mercenaries.

These terrorists and racists have vowed to commit ethnic cleansing, murdering the Negro population, they have raped women, they have torched buildings, they have killed children, they have destroyed public and private property, they have taken up arms against their government, they have sided with foreigners, they have murdered innocent people and as I write, several dozen black African women are tied up in a school in Tripoli and are being gang-raped by this filth.

International law and the world community

However sickening, however disappointing and however depressing the above-mentioned international community may have become, out of this fog of confusion, darkness and generalised evil arises a new world community with the moral integrity to stand up and be counted. There are not many nations who slammed their fist on the table and said "No! We will not recognise the NTC because its governance has not been legitimised by the Libyan people, we will not back a government that has been imposed by foreign powers".

This world community is formed by the following nations:

Countries which do not accept the status of the NTC as the legal representative of the people of Libya at present:

The reasoning was summed up ably by the Cuban Ministry of Foreign Affairs:

"Cuba does not recognize the National Transition Council or any provisional authority and will only recognize a government that is established legitimately and without foreign intervention, via the free, sovereign will of the Libyan people," strongly criticising the NATO intervention and "the deployment of diplomatic and operative personnel in the field" by the NTC's international allies.

Twenty-seven nations upholding international law and standing up against terrorists and racists. It remains to be seen what sort of free and fair democratic elections are to be held in Libya. The Jamahiriya government offered to hold elections and NATO and the NTC refused, so we see, finally, who is democratic and who is not.

Any electoral process in which the Jamahiriya proposes itself for election and is refused the right to stand will be fundamentally flawed and any government resulting from such a process will remain as illegitimate as the NTC.

Meanwhile there remains the issue of the criminal intervention by NATO as an Organization and the accountability of its military membership and political sponsors individually. War crimes were committed, evidence of these exists and the case shall soon be drawn up.

The basis exists for a new world community to be formed and welcomed, a community of common values based upon common legal principles. The new capital of the hearts and minds of the world community has shifted southwards, towards a new pole of righteousness and courage and it lies between Managua, Havana, Caracas, Luanda and Harare.