Obama and the Abandonment of Hope 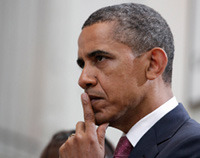 Somewhere amidst the elation, optimism and dreams of progress that many, if not most, Americans felt immediately following the election of Barack Obama, one critical reality was forgotten:

Obama is a politician.

This became conspicuously evident when one of his first official acts was to declare an egregious, "look forward, not backward" policy when it came to dealing with, or more accurately not dealing with, the war crimes, tortures, corruption and mendacity of the Bush dictatorship.  As a result of this policy, torturers, liars and war criminals now profit by writing books, giving lectures, appearing on television, teaching at major universities, and even securing appointments as federal judges.

Yet America's government still has the audacity to condemn human rights abuses in other countries, and to hypocritically demand that those who commit such abuses be brought to justice.

If this isn't disillusioning enough, America's first African-American president is also terrified to deal with any issue containing racial overtones.  Unlike the self-loathing, ethically corrupt and sadistic supreme court "justice" Clarence Thomas (I place "supreme court" in small letters, because its corrupt and racist majority of Roberts, Scalia, Alito, Thomas and Kennedy means there is nothing "supreme" about it), who is using his undeserved position to wage some perverse vendetta against African-Americans, Obama has refused to grant a posthumous pardon to America's first African-American heavyweight boxing champion, Jack Johnson, despite the fact that Johnson was convicted on trumped-up charges because he courageously refused to play the role of the obsequious black man during a time when refusal to play such a role could have easily resulted in lynching.  He hastily fired Shirley Sherrod, an African-American employee of the Agriculture Department, before obtaining all the facts about the content of a speech she delivered to the NAACP, simply because some right-wing commentator deceptively hollered "racism!" And statistics show that the percentage of African-Americans who are unemployed is more than double that of their white counterparts, and the highest it has been in thirty years.

Yet what is this Nobel Peace Prize winning president doing?  Helping NATO bomb Libya.  At least this explains Obama's refusal to prosecute Bush-era war criminals:  He wanted the power to commit war crimes himself.  And even though he defended his actions by pontificating about the need to protect Libyan civilians as they struggled for democracy against the autocratic regime of Moammar Gadhafi, Obama did little more than utter harsh denunciations while Syrian dictator Basher al-Assad tortured and murdered those who held similar aspirations.

Ironically, by bombing Libya the United States military and NATO are attacking one of their former allies in the so-called "war on terror," while empowering a man they once labeled a "terrorist."

According to a recent Associated Press article, the CIA once "worked closely with the [now] ousted regime of Moammar Gadhafi, sharing tips and handing over terror suspects for interrogation to a regime known to use torture . . ."

In fact, the CIA was (and is) so depraved, corrupt and contemptuous of democracy that it even proposed setting up "a permanent Tripoli office."  And one of its victims was none other than current Libyan rebel leader Abdel-Hakim Belhaj, who the CIA kidnapped and tortured "in a secret prison in Thailand before he was returned to Libya and locked in the notorious Abu Salim prison."

It would seem that Americans would be outraged that their tax dollars are being spent to support the rapes, murders, tortures and other crimes of the CIA.  In fact, given the scope of death and destruction the CIA has been responsible for, through assassinations, support of military coups, and instigations of armed conflicts, particularly in third-world countries, it is undoubtedly the largest and most powerful terrorist organization in the world.

But because its crimes mostly occur outside of America's borders, and because America's corrupt legal system incessantly refuses to prosecute CIA crimes, and in many cases extends judicial immunity to CIA criminals, the world continues to suffer.

In fact, even one of Obama's biggest political "victories," the killing of Osama bin Laden, must be viewed with askance, particularly since a public trial might have exposed some of the rogue elements in the United States government who, through act or omission, facilitated the 9/11 attacks on the Pentagon and World Trade Center so they could segue the resulting fear and outrage into the decimation of the Bill of Rights and the invasion of Iraq.

Some experts, as reported by USA TODAY, have argued that Obama and NATO's disparate approaches to Libya and Syria are governed by concerns over Arab-Israeli relations.  But if this analysis is indeed correct, then the Israeli government is essentially the Emperor of the World, because dreams of freedom, democracy and human rights apparently thrive or perish according to its whims.

Another reason for the bombing of Libya is to justify America's bloated defense budget.  Despite all the complaints about excessive spending, this budget is sacrosanct, which means the American government devotes more money to things that destroy life, like weapons and warfare, than to things that enrich life, like education and health care for all its citizens.

By keeping its people in constant fear of "terrorism," and through an ability to garner support for its perpetual incursions and multitudinous wars by simply muttering platitudes about "freedom" and "democracy," America's government has ensured that its "sheeple" will always be willing to sacrifice their young for the profitability of the military-industrial complex.

This instillation of fear also makes America's "sheeple" more than willing to relinquish the very rights and freedoms that their wars are allegedly protecting.  In fact, Obama was so eager to sign the renewal of the Patriot Act, the law that decimated the Bill of Rights, that he used a mechanical "autopen" to do it.  And, in a predictable display of hypocrisy, many so-called "conservative" politicians, who incessantly harangue about the intrusiveness and power of big government, were the ones most zealously clamoring for this draconian measure to be renewed.

Some critics have argued that the extraordinary powers being assumed by the American government in its so-called "war on terror" are little different from the powers Abraham Lincoln assumed during the civil war.  But, regardless of whether Lincoln was right or wrong, the civil war had a recognizable enemy and a finite ending.  But the "war on terror" provides no Appomattox for the vanquished to surrender his sword; thus those who invoke the specter of terrorism to justify the use, or more accurately the abuse, of these extraordinary powers know they can do so forever.

In attempting to rationalize these abuses, the American government proclaims that "we can't let the terrorists win."  But if the fear instilled by the prospect of terrorism has intimidated Americans into mutely and servilely accepting laws like the Patriot Act and government sanctioned kidnapping, torture and murder, even when done to American citizens, then the terrorists have already won, because they have successfully dismantled the very foundation of America's freedoms:  the Bill of Rights.

And those gullible enough to believe the American government will only use these draconian measures for "good" should recall the litany of FBI and CIA abuses and crimes that the Church Committee exposed in the mid-1970s.

Still another reason for the bombing of Libya is the primary reason wars are fought in the first place:  to exploit the natural and human resources of another nation.

In 2010, the supreme court gave political corruption a blank check when it issued its Citizens United ruling.  This ruling stated that, for the purposes of freedom of speech, corporations have the same rights as individuals.  Since that time, this ruling has been interpreted to mean there can be no financial limitations on what corporations contribute to political campaigns.

What this means to democracy is that candidates have been bought and paid for by plutocrats and corporate fascists before they are even presented to voters, and that the defense of freedom of speech is simply a convenient excuse used to wage wars for profit, but damned be the person who actually exercises this freedom by openly condemning such wars.

This milieu of corporate fascism has already polluted America's political landscape.  In Wisconsin, thanks to the Citizens United case, the billionaire Koch brothers have installed a puppet, anti-labor governor named Scott Walker.  And this fascism has spilled over into Indiana, Ohio and Michigan as well.

So now that corporations have become the American government, it is predictable that the government will obsequiously do their bidding.  Like Iraq, Libya has extensive oil resources that can be readily exploited.  But should the leaders of Libya's new government ever decide to place the interests of their people above the corporate pillaging of their natural and human resources, they will undoubtedly suffer the same fate as Noriega, Hussein and Gadhafi.

It would seem that in an enlightened, educated, and "God-fearing" country like America few would be willing to sacrifice their souls by working for a criminal organization like the CIA.  But, as I've stated in previous Pravda.Ru articles, while Americans are quick to praise good with their words, they are even quicker to support evil with their deeds.  The sad reality is an abundance of reprobates-be they judges, prosecutors, politicians, corporate fascists, or agents of the FBI and CIA-lust to hold power over their fellow human beings, even as they pretend to be motivated by an altruistic desire for truth, justice, public service, or protection of national security.

Unfortunately, people who are sincerely motivated by these desires either never obtain the authority to apply them or (as Obama himself has demonstrated) become so corrupted by self-serving ambition and power that their ideals quickly die.

But even though I believe the world is motivated by evil, this belief did not evolve from pessimism or despair.  It arose because it explains why evil people are incessantly allowed to attain power, acquire riches and/or evade justice, while good people are relentlessly oppressed, ostracized and impoverished.  It has been decreed, whether by God or nature, that all living things are destined for the same fate, and when the time comes, as Hamlet so eloquently said, to "shuffle off this mortal coil," there is some satisfaction in knowing that no amount of political power, riches or legal "immunity" will give evildoers even one more second of life.

Maybe then, in some eternal dimension, good will be rewarded, true justice will prevail, and the scales will be balanced.

I truly hope this is so, because it should sicken the world that in today's America torturers, murderers, and war criminals not only walk around with immunity and impunity, they are even profiting from their crimes.  And if a nation like America calls this justice, then, at least in the realm of mortality, justice does not exist.