A massacre, a genocide, a razing of a town to the ground. Their crime? None. The only way NATO terrorists can take the town is if they kill everyone. 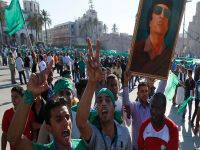 Libya is all green, they say NO to terrorists

The city of Sirte, hometown of Libyan leader Muammar Al-Gaddafi, is under siege from NATO barbarians. So far in the 4 days plus campaign, over 1,400 civilians have been killed. The campaign is being waged for two purposes.

The first purpose is to murder Gaddafi and his entire family. Witness the fact that since they assumed he was in his compound in Tripoli, it has been the target of daily bombing attacks. One such attack killed one son and 3 young grandchildren.

The second purpose is to squash, destroy, murder, eliminate and put down all resistance to a NATO terrorist takeover of the country. The Libyan people refuse to give up their freedom and be subjugated to imperialist, colonialist crusader plunder and slavery.

A thousand people alone were killed in a bombing by NATO aircraft during the prayer of Eid al-Fitr on this Tuesday morning (31st). The believers were killed by 12 rockets within a few minutes!! NATO has not cared the least that this has been Ramadan for Muslim believers.

As NATO pounds and murders all within the city limits, the stooge NATO client terrorists of the National Transitional Council on the city's perimeter murder anyone who tries to escape from the carnage within.

They lurk in wait on the outskirts of a city that will not surrender. They have declared that if they cannot take power, they will kill everyone until there is no one left.

According to George Orwell's novel:

This is NATO's idea of a government, and freedom and democracy? This is pure Satanic evil at its worst. NATO and the CIA need to stop prowling the world, colleting human excrement, terrorists and criminals to dump into Libya!

This is a violation of every single international law, every single part and parcel of the UN Charter, the UN Universal Declaration of Human Rights, the Geneva Conventions and human decency.

NATO and their terrorist stooges possess no decency, no humanity or compassion, nor any semblance of legitimacy. They are cowards, and inept cowards at that. They are led by nothing more than dimwitted simpletons with no conscience and evil, black souls. One might surmise they are possessed by devils and demons from hell.

In order to implement their plans for conquest, besides barbaric violence, their only other weapon is lies and disinfomation, such as the bogus claims of having taken over Tripoli and the "fall" of the Libyan leader, which has not and will not happen.

Meanwhile that fool Ban Ki-Moon pretends to be doing a job he should never have accepted, because he is totally incompetent. That might be said of the entire UN organization, which has been degraded to a mere rubber stamp for imperialist powers.

Three of the 5 main countries are totally worthless if one seeks peace, dialogue, justice or fairness.

Sirte was transformed into a showcase of public works by Muammar Gaddafi. It has low mud houses as well as fine brick houses. Built also was a complex of hotels and government offices. There are towers of white stone neatly landscaped and black glass that could be found in any western city. When you get inside, the decorative style has been described as pure Arabian Nights.

Will there be anything left of this once bustling town before NATO savages are satisfied? Every action of NATO has been totally illegal according to international law and the UN Resolutions 1970 and 1973: not taking sides in a conflict (internal civil war) no boots on the ground, no supplying weapons to one side, meddling in the internal affairs of a country, wanton murder and attempted assassinations.

Will some honorable country, group of countries, human rights organization or international lawyers please step forward and stop this murderous campaign? What kind of people live on this planet if they allow this to continue? NATO is like a rabid dog that has to be put down.

They have threatened independent journalists and overseen a massive campaign of racial murders against any black caught in their path.

Cameron, Sarkozy, Obama...you are butchers, murderers, criminals. Your names will be listed on the same page as Hitler and the Nazis and under the same context, with the same scorn, derision and contempt.

You and every single individual that followed your orders: remember Nuremberg and may you have your Nuremberg war crimes trials for these outrageous crimes against humanity.

Will your eternity in hell have been worth whatever earthly gain you made?

On this FATEH OF SEPTEMBER 1st. we salute the great Brother Revolutionary Leader, Muammar Gaddafi, and the brave, heroic, courageous, resolute, honorable Libyan people. To freedom and victory!