Libya, the Truth and the international community 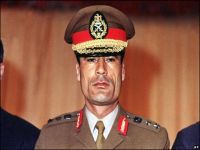 Today, August 31, we are on the eve of the September 1 Al-Fateh Revolution which brought Muammar al-Qathafi to power in a bloodless coup which installed the world's first Jamahiriya, or government through People's Congresses. The tremendous support behind Colonel Gaddafi in the international community is a telling comment on where people stand.

Muammar al-Qathafi is, in one word, a genius. His Jamahiriya system of government is perhaps the purest form of governance and its sheer simplicity means it can be implemented in any society, anywhere on Earth. In essence, it is government based on people's congresses - government by the people for the people, in a world in which the resources belong to all, equally. It is the real village, implemented globally, understanding that the human being functions best when living and cooperating in small communities.

Now that paragraph will taste of poison for the clique of corporate elitists who gravitate around the centres of power, using the media and NATO to manipulate public opinion and where possible, implant their regimes and that paragraph also explains the Libya story in a nutshell.

And we also see in this crisis exactly where our world stands. International law exists but is not implemented. NATO has broken all the rules in the book in Libya and has rendered itself and its representatives liable for prosecution - something which is at present in the pipeline. On one side of the divide, the Satanic and dark forces of NATO and on the other side, those who see themselves as the guardians of what is right and good and just. It is good versus evil, it is God versus Satan, it is about implementing international law.

For those who justify NATO's act of aggression by calling "Gaddafi" a "dictator", some home truths. Muammar al-Qathafi was to receive a humanitarian prize in March for his record, he was the one to speak out against the more conservative practices in Islam, who spoke out against the killing of homosexuals or the stoning of women. The Jamahiriya system is the antithesis of a dictatorship. What dictator educates his people and pays for them to study abroad?

Libya's literacy rate improved from ten per cent to ninety per cent under "Gaddafi" and under his guidance the country rose from the poorest in the world to the richest in Africa. Those who understand anything about geopolitical events know that this is an amazing achievement, in itself, within four decades.

Colonel Gaddafi also leaves his legacy, which is the Green Book, which explains his philosophy and his political system - one which should at least be fundamental reading in all schools and one whose Legacy will be eternalised by the Internationalisation of the Jamahiriya, something which is already taking place and which has tens of thousands of followers around the world. Tomorrow, there will be millions.

Colonel Gaddafi can also sit back and look at his enemies today and laugh. True, he has been fighting, and continues to fight, against the most powerful military organization in the world for six months and any progress his enemy made, was done by breaching the rules of engagement, each and every one of them. So that is hardly "winning". But he is the dream-maker behind the African Union, he stands for African Unity and against imperialism, he stands for a united Africa, Africa for Africans, African problems solved by Africans for Africans, and African resources for African people. More than this, his pan-African projects saw Africans freed from the yoke of imperialist tyranny, having their own funding for their own programmes without having to depend on western sources which provided goods, yet with enormous tails of interest payments attached.

What his enemies want we saw very clearly - an international "conference" was called last week in which lines were yet again drawn on maps and in which the colonial powers literally divided among them Libya's spoils, even before the conflict is over. As for the "rebels" themselves, what are they and what do they want?

Western sources took delight in the freeing of prisoners without bothering to research what they had done or why they were there. Serial rapists, murderers and common criminals now parade as "rebels", a movement which included a bunch of political opportunists carefully groomed by the French, British and Italians, a few liberals, Islamic fundamentalists (as we shall soon see more clearly), a lot of mercenaries from abroad and in essence, a load of day-trippers who raced into a conflict with machine gun blazing in the morning before driving home to have dinner at night.

Looters, rapists, murderers. Terrorists, yes - civilians, no. Militarily capacitated by a savage and murderous NATO bombing campaign, these people may or may not eventually dismantle the Jamahiriya in Libya but they will not destroy it as a system. The Legacy is well protected and Muammar al-Qathafi knows this.

That is why Muammar al-Qathafi can look back with satisfaction over what he has achieved and why Messrs. Cameron, Obama and Sarkozy will spend the rest of their pathetic, wasteful and vapid lives looking over their shoulders or wondering who it might be every time there is a ring at the doorbell, leaving no legacy at all except a failed attempt to govern their own countries, while they stood behind the most blatant and flagrant violation of the law in recent history. And, worse, they and their NATO machine have the blood of Libyan children on their hands. If they had an iota of decency they would hear these screams ringing in their ears all night every night and the more they tried to block them out, the louder they would become.

That is why so many people in the international community support Muammar al-Qathafi. Those of us who have actually been to Libya and who have knowledge of the country understand very well where the hearts and minds of these people are - with what is right and just and good.

As for the hearts and minds of NATO and those who support them, well, there are always those who will sell their souls to the Devil. However, there is something higher than us, and to whom we will inevitably present ourselves for judgement when the day comes. Muammar al-Qathafi knows where he is going, and I suspect Cameron, Obama and Sarkozy, deep down, know where they are going too.

For those with any doubts after a bombardment of lies from the western media, research Green Book, Jamahiriya and Gaddafi projects in Africa.